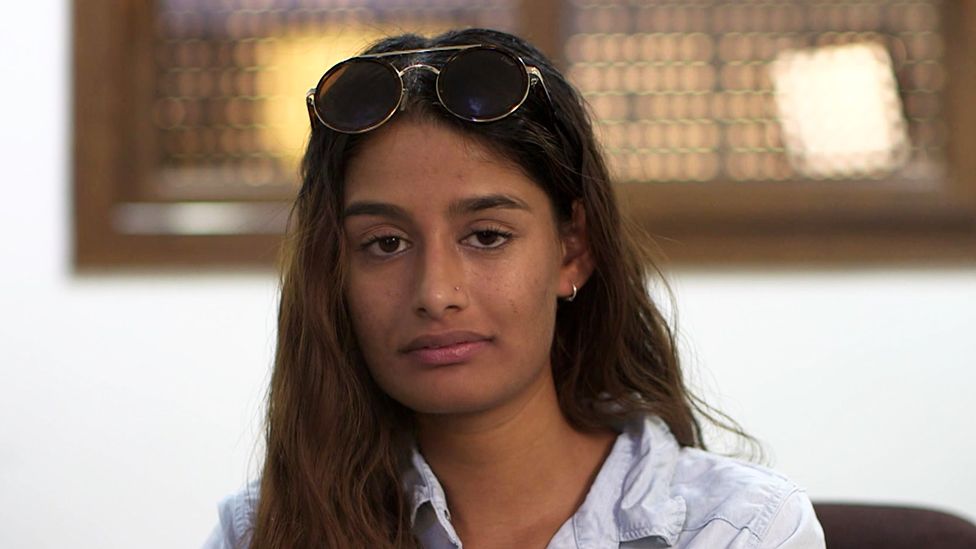 Shamima Begum trafficked by IS to Syria for sexual exploitation, tribunal hears

Shamima Begum, who left the UK for Syria as a teenager to join the Islamic State group, was a victim of human trafficking for sexual exploitation purposes, a tribunal has been told.

Ms Begum travelled to Syria in 2015, with her citizenship stripped on national security grounds in 2019.

A five-day immigration hearing is considering an attempt to challenge the removal of her UK citizenship.

The Home Office insists she continues to pose a threat to national security.

The case is being heard at the Special Immigration Appeals Commission (SIAC), which has similar standing to the High Court, and can hear national security evidence in secret if necessary.

Lawyers for Ms Begum, now 23, told the court that a decision by then-Home Secretary Sajid Javid to remove her British citizenship was unlawful, as it did not consider whether she had been a child victim of trafficking.

She remains in a camp controlled by armed guards in northern Syria, nearly eight years after running away from home aged 15 alongside two other east London schoolgirls - Kadiza Sultana, 16, and 15-year-old Amira Abase.

Ms Sultana is believed to have been killed in a Russian air strike in Syria, according to her family's solicitor.

The whereabouts of Ms Abase are unknown, but Ms Begum previously said in a 2019 interview that she had heard she might still be alive.

In August, a BBC News investigation revealed Ms Begum was smuggled into Syria by an intelligence agent who was working for Canada at the time. The Canadian government has said that it will "follow up" on the allegations.

Once in Syria, she married a Dutch recruit and lived under IS rule for more than three years.

In 2019, she was found by the Times newspaper, nine months pregnant, in a Syrian refugee camp. Her baby later died of pneumonia and Ms Begum said she had previously lost two other children.

In an interview with the BBC's I'm Not a Monster podcast in September 2021, Ms Begum said she would regret joining the Islamic State group (referred to as IS, ISIS and ISIL) for the rest of her life and offered to help the UK fight terrorism.

Ms Begum previously said the 2017 Manchester Arena bombing, in which 22 people - some of them children - were killed in a bombing claimed by IS, was similar to military strikes on IS strongholds and called the terror attack "retaliation".

It has been almost eight years since Shamima Begum disappeared from east London with two school friends. They were heading to the Islamic State group in Syria.

For more than a year, I have been talking to her in a dusty detention camp in north-eastern Syria. It is where Shamima and other women and children who are associated with IS are held.

Throughout an exclusive series of interviews for the I'm Not a Monster podcast and a BBC Two documentary, Shamima claimed that she is a victim of trafficking and that before she left the UK, she was sent detailed instructions by IS members about how to make it there.

She has also said that she would have never made it to Syria without the help of an IS people smuggler, by the name of Mohammed Al Rasheed.

Ms Begum's lawyers argued at a tribunal on Monday that the evidence she was a child victim of trafficking is "overwhelming" and "depriving her of her British citizenship was a disproportionate means of addressing any alleged national security risk".

Samantha Knights KC said: "At its heart, this case concerns a British child aged 15 who was persuaded, influenced and affected with her friends by a determined and effective ISIS propaganda machine."

She added that "over-hasty steps" deprived her of her citizenship forever.

Lawyers for the Home Office argued the decision to deprive Ms Begum of her citizenship was correct, saying she fled from IS territory "for safety", not "disengagement from the group".

They told the court that, in "multiple press interviews" before Mr Javid made his decision, she expressed "no remorse and said she did not regret" joining a terrorist organisation - also arguing she had acknowledged she was "aware of the nature of the group when she travelled".

A formal assessment made by the UK security service MI5 says that people who travelled to IS-controlled territory "will have been radicalised and exposed to ISIL's extremism and violence", with the security service further assessing anyonereturning as a national security threat.

During the hearing, Ms Begum's lawyers pressed an MI5 officer, known as Witness E, whether the security service had considered if Ms Begum was a victim of trafficking when assessing her national security risk.

Witness E said MI5 are not experts in "the definition of" trafficking, but that victims can be threats too.

Witness E pointed out that Ms Begum must have been aware of the Islamic State group's atrocities, including beheadings of Western hostages, by the time she travelled.

The Home Office also said that information given to the police in November 2015 showed she had no desire to return home and still supported ISIL after her arrival in their territory.

The hearing, which is expected to last five days, continues.

Shamima Begum spoke of her regret at joining ISIS in 2021 (Credit: I'm Not A Monster: The Shamima Begum Story/BBC Sounds/5 Live/BBC Two)

Shamima Begum speaking to the I'm Not a Monster podcast, says she needed help from traffickers to reach Syria