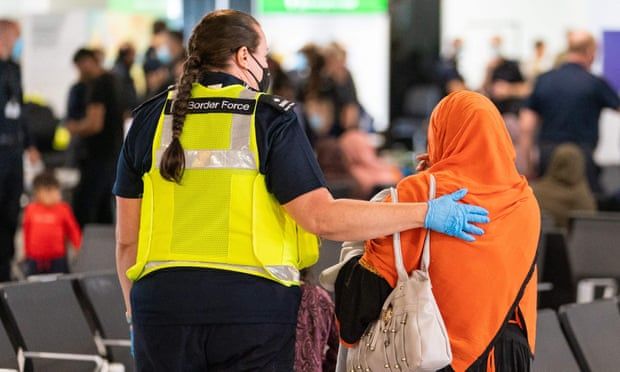 Thousands who fled Taliban are living in hotels with inadequate healthcare in Operation Warm Welcome
Afghans who recently arrived in the UK after fleeing the Taliban takeover have asked to be sent back, casting doubt over the success of Operation Warm Welcome, the government’s Afghan resettlement programme.

It was launched by Boris Johnson on 29 August to help Afghan refugees arriving in the UK by providing support so they could “rebuild their lives, find work, pursue education and integrate into their local communities”.

However, a widespread lack of housing means hotels have been commandeered as emergency temporary accommodation for 7,000 Afghan refugees, with Home Office officials admitting that some will be held in them for months.

Already some refugees have had enough. One doctor, who has been working with the newly arrived Afghans for weeks but who requested anonymity, said: “I’ve had a few patients telling me they want to go home. One guy, who was 67, kept saying: ‘I can’t take this any more. I have to get out of this [hotel] room.’ ” The GP, an Afghan who fled the country in 2000 when the Taliban were previously in power, added: “Another said: ‘I just want my freedom from the hotel.’ I had to put him on medication, and his wife, because they were so upset.”

There are also concerns over healthcare for those held in hotels following the evacuation from Kabul airport, with one charity describing confusion over access to local GPs.

One council leader described the government’s programme as a “shocking failure”. Councillor Danny Thorpe of the Royal Borough of Greenwich, south-east London, said the lack of organised government support when 700 Afghans arrived in the borough in August was “unforgivable”. “This was one of the most shocking failures of government that I ever encountered,” he said.

Thorpe accused government officials of not providing enough support or sending enough officials when hundreds of Afghans were initially put up in hotels in his borough during their 10-day Covid quarantine.

He said: “There was a huge mismatch between the rhetoric of senior government politicians and their actions to support those people.”

When Greenwich council told the government they were about to run out of baby milk, Thorpe claims they were told that some would be delivered “in a few days”.

In Sheffield, where a five-year-old Afghan refugee fell to his death from a hotel window in August soon after arriving in the UK, the local council has concerns over the suitability of hotels for holding Afghan refugees. A spokesperson said it had shared its misgivings with the Home Office, but would not elaborate on what response it received.

Meanwhile, the Local Government Association, which represents 328 of the 333 councils in England, called on the Home Office to reduce confusion in data that it is sending to different locations over the actual numbers of Afghans and their needs. “The government needs to engage more fully with local authorities and share regular data about numbers, needs and strengths of Afghan refugees and others recently resettled,” said an LGA spokesperson.

Jill O’Leary, lead doctor at the Helen Bamber Foundation, which is working with 650 clients, said the situation was “muddled and confused”, with certain contractors at hotels unaware they were obligated to help Afghans register with a GP and explain their entitlements. “When we consider the needs of people, there seems to be a blind spot with the Home Office when it comes to vulnerability,” she said.

A spokesperson for Medact, a health charity that campaigns to protect human rights to healthcare, said they were concerned with the provisions for asylum seekers, including those under Operation Warm Welcome. They said: “The Home Office has a legal duty to provide at least minimal support to otherwise destitute asylum seekers, but arrangements by the Home Office and its contractors to house those waiting in interim publicly funded accommodation are medically dangerous.”

The Afghan GP added that initially when Afghan arrivals were placed in hotels there was “inadequate” medical provision. She described one incident at a hotel where she found a malnourished disabled child who had not been registered with the medical authorities.

A Home Office spokesperson said: “The UK’s biggest and fastest emergency evacuation in recent history helped over 15,000 people to safety, and hotels remain a temporary measure to help accommodate those we brought here. It is going to take time to find permanent homes for everyone but we are working urgently with our partners to do so.

“Our aim is to support everyone who is resettled here to build a successful life in the UK, and that is why we work around the clock to provide wrap-around support to families. This includes working closely with local authorities across the UK to ensure everyone temporarily accommodated in hotels has access to essential provisions, healthcare, education and universal credit.”
#Boris Johnson  #Johnson  #Covid
Add Comment