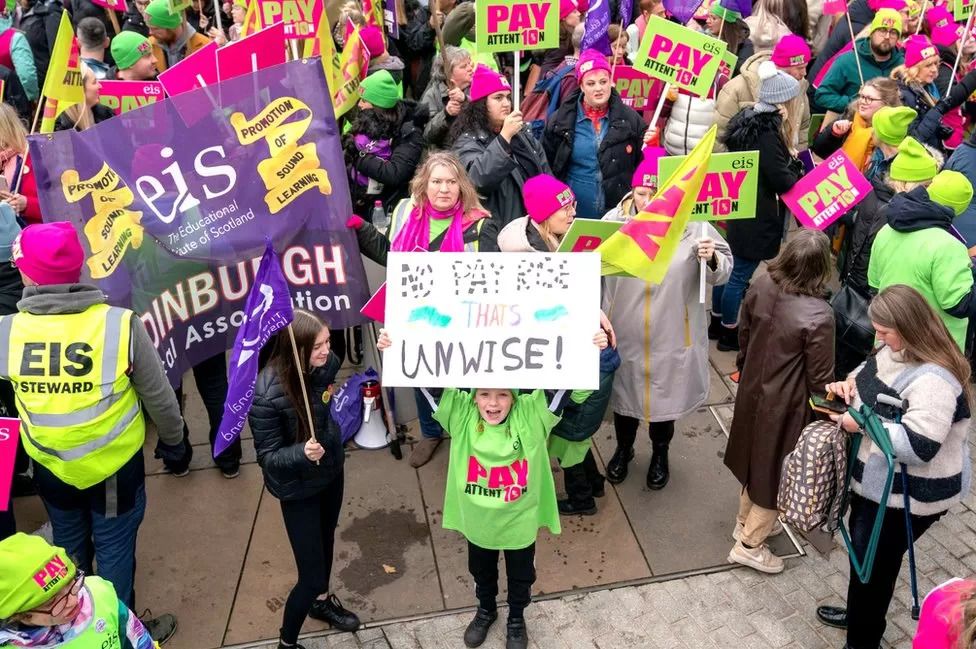 Widespread disruption is expected at Scottish secondary schools next week as more teachers strike over pay.

Members of the SSTA and NASUWT unions will walk out on either Wednesday or Thursday, depending on the area they are in.

All secondary schools in East Ayrshire, East Dunbartonshire and Scottish Borders will be closed as a result.

The impact varies in other council areas, with some closing all secondary schools to younger pupils.

Others are taking a decision on closures on a school-by-school basis. Some primary schools will also be affected.

Local authorities and schools have begun contacting parents to confirm any school closures.

The strike is part of an ongoing dispute over teachers' pay.

Industrial action by members of EIS last week led to the closure of almost every school in Scotland.

The latest pay offer from the Scottish government was formally rejected on Wednesday.

Teachers' unions were being offered a rise of between 5% and 6.85% but they want 10%. Education Secretary Shirley-Anne Somerville says the 10% demand is "unaffordable".

The Teachers' Panel of the Scottish Negotiating Committee for Teachers (SNCT), the negotiating forum for teachers' pay in Scotland, said the Scottish government's offer was "wholly unacceptable to Scotland's teachers".

The SSTA and NASUWT have far fewer members than the EIS which represents about 80% of teachers, so schools are able to stay open in some capacity.

However, about a third of Scotland's councils have now said they expect significant disruption.

Which schools are closing?

Thu 8 Dec - Secondary schools will be closed to pupils in S1-S4.

Thu 8 Dec - Where possible, all schools will remain open but the industrial action will affect each school in different ways. This means the closure or partial closure of some schools and disrupted timetables in others. Parents ill be notified by their schools.

Thu 8 Dec - Only secondary schools will be affected. Arrangements will be confirmed by schools.

Wed 7 Dec - One secondary school closed to all pupils. Arrangements for others to be confirmed.

Wed 7 Dec - Secondaries will be open to all students but there may be some disruption to classes.

Wed 7 Dec - There will be some disruption to classes in secondary schools. Each school will write to parent/carers directly with the arrangements for their school.

Wed 7 Dec - All secondary schools and three primaries will be closed.

Thu 8 Dec - Around 10% of teachers are expected to strike. Some secondary schools will be closed or partially closed. More information will be provided to parents by their schools as soon as possible.

Thu 8 Dec - The council is planning to open all schools but education provision and delivery will be restricted in line with the number of teachers participating in the strike. Head teachers will advise.

Full details have still to be confirmed. Glasgow hopes secondary schools will be open for S4, S5 and S6 students but some may be closed to S1, S2 and S3 students.

Wed 7 Dec - Parents will be notified of the impact of the industrial action. So far, no complete or partial closures of secondary schools have been announced

Wed 7 Dec - Four of its seven secondaries will only be open to S4, S5 and S6 pupils next Wednesday. The other three will be open to all students.

Thu 8 Dec - All secondary schools will be closed.

Thu 8 Dec - All Moray secondary schools will be closed to S1-3 pupils with variable arrangements in place for young people in S4-6, depending on staff availability. Head teachers will inform families directly of their individual arrangements over the coming days

Wed 7 Dec - Some primary school classes may be affected and parents/carers will be notified. Secondary schools are more complex and parents will be updated on arrangements.

Thu Dec 8 - All secondary schools except Pitlochry High School will be closed to pupils in S1-S4. S5 and S6 pupils should attend school as normal.

Wed 7 Dec - Five of eight secondary schools will be closed to pupils. Two will be open to S4, S5 and S6 students.

Thu 8 Dec - Some year groups will be able to attend and schools will notify pupils, parents and carers. Bannockburn High School will be open to all pupils in S1 to S6.

Secondaries will be open to all students but there may be some disruption to classes.