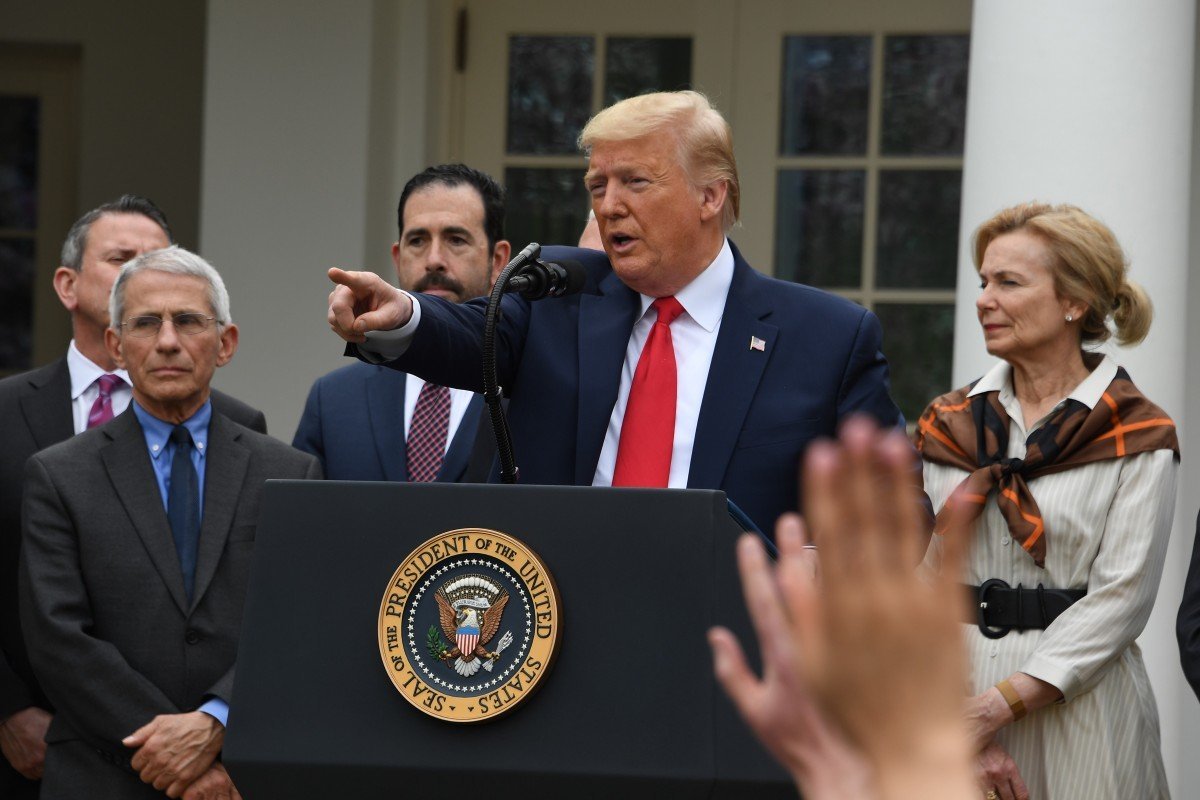 Coronavirus: Second person who was with Donald Trump at Mar-a-Lago tests positive for disease

A Republican official who did not want to be named made the claim; Trump has also spent time with a Brazilian official who tested positive for the virus. Trump said that he will get tested Covid-19 on Friday, but also shook hands with several people while announcing a US national emergency that day

A second person who was at Mar-a-Lago with US President Donald Trump last weekend has tested positive for the novel coronavirus, according to a Republican official who spoke on condition of anonymity to discuss private health matters.

Trump, who has announced a state of emergency in the US, told reporters on Friday that he will likely be tested for the disease “fairly soon”, as questions swirled about why he, his top aides and his family weren’t doing more to protect themselves and others against Covid-19.

Following repeat direct and indirect exposures, Trump was defensive, insisting he didn’t need to isolate himself because he wasn’t exhibiting symptoms. But he conceded he would “most likely” submit to testing after the Brazilian official was confirmed to be infected.


At the same time, Trump continued to flout public health officials’ advice by publicly and repeatedly shaking hands during an address on efforts to combat the pandemic. At the same event, he allowed that “anyone can be a carrier of the virus” and risk infecting older Americans and others at higher risk.

The president, according to two people close to the White House, has resisted taking the test for fear it would project weakness or worry.

Trump has wanted to appear in full control during the crisis, especially as he tries to calm stock markets amid historic drops, and has expressed concerns that taking personal steps could undermine that.

He continued to stress Friday that he is not exhibiting any symptoms of infection, but he skirted questions about whether he was being selfish by refusing to isolate himself when others who have had similar exposure have chosen to do to avoid potentially infecting others.

Asked whose advice people with similar exposure should listen to in the face of the contradictory messages, Trump said, “I think they have to listen to their doctors.”

Trump has also had repeated contact with lawmakers who were themselves exposed to people who later tested positive and chose to self-isolate out of an abundance of caution.

As White House officials worked to determine the level of exposure by the president and senior aides, Trump held an afternoon news conference and announced he was declaring a national emergency – something he had been reluctant to do for fear it would further rattle the markets – and unveiled a new public-private partnership to expand coronavirus testing capabilities.

Still, he said that, “We don’t want everyone taking this test,” adding: “It’s totally unnecessary. This will pass.”

The president had up until Friday declined to be tested for the virus or to limit his contact with others, professing no concern about potential exposure as his White House insisted they were following Centres for Disease Control and Prevention guidelines. He told reporters Thursday that he was “not concerned,” adding Friday that, “we have no symptoms whatsoever.”

And even as he refused to modify his own behaviour – including continuing to shake hands, which has been discouraged by scientists encouraging people to practice “social distancing” – Trump told the nation that, “We must take all precautions” and be “responsible for the actions” that we take and see others take.

In fact, Trump, a self-described germaphobe, repeatedly made contact with people during the announcement, shaking the hands of several retail and health care industry executives as he called them up to the lectern to say a few words.

Walmart CEO Doug McMillon appeared to be moving away from Trump after saying a few words. But then Trump put out his hand for a handshake and McMillon obliged.

He extended his forearm for an elbow bump. Trump initially stuck out his hand but then shifted to accommodate.
“Okay, I like that,” Trump said. “That’s good.”

Wajngarten posed for a photo with Trump at his Mar-a-Lago club and attended a birthday party for Kimberly Guilfoyle, who is dating the president’s eldest son, Donald Trump Jnr The president attended the party as well.

There were also fears that Bolsonaro himself might have the virus, but he said Friday he’d tested negative.

The White House stressed that Trump and Vice-President Mike Pence “had almost no interactions with the individual who tested positive and do not require being tested at this time.”

In addition to the Brazilian official, top administration officials – including Attorney General William Barr and Trump’s daughter and senior adviser Ivanka – met last week with an Australian Cabinet minister who on Friday tested positive for the virus.

Minister for Home Affairs Peter Dutton said he woke up with a temperature and sore throat on Friday, one week after his meeting with the Americans.

White House spokesman Judd Deere said Ivanka Trump worked from home Friday “out of an abundance of caution”, but said Dutton had been asymptomatic during their interaction and the White House Medical Unit determined she was “exhibiting no symptoms and does not need to self-quarantine”.

The CDC advises those who have been in “close contact with a person with symptomatic laboratory-confirmed Covid-19“ to remain home and practice social distancing.

People don’t show symptoms immediately after exposure to the virus; there is an incubation period of anywhere from two to 14 days.

However, not all exposures automatically put people at risk of infection: the CDC doesn’t consider it risky to walk past someone with the virus or to be briefly in the same room with them.

The CDC is most concerned with close contact, which it defines as being coughed on by a patient or being within about 6 feet for a prolonged period of time such as while living with, visiting or sharing a room.

Trump has also had repeated contact with others who were exposed to the virus and quarantined themselves out of an abundance of caution.

That included Florida Representative Matt Gaetz, who travelled aboard Air Force One with the president on Monday and found out mid-flight that he was among a handful of Republican Party lawmakers who were exposed to a person who tested positive for the virus after last month’s Conservative Political Action Conference.

Also staying home: Texas Senator Ted Cruz, who announced Friday he would be extending his CPAC-related self-quarantine after coming into contact with another person who later tested positive, and South Carolina Senator Lindsey Graham, who announced Thursday he was self-quarantining after spending time in Mar-a-Lago and his own meeting with Dutton.

Florida Senator Rick Scott was also isolating himself following his interactions with the Brazilian delegation.

Many doctors across the country have been advising those who have been exposed to someone with the virus to isolate themselves. And Trump, who is 73, is considered to be at higher risk of developing serious complications because of his age.

The president should get tested, even if he is not exhibiting symptoms, said Stephen Morse, a Columbia University expert on the spread of diseases.

”If f I were in that position I’d certainly want to be tested, rather than waiting until something happened,” said Morse. Beyond Trump’s own health, he said, he could pose a risk to others if he is infected and keeps meeting other political leaders.
”Anyone who’s infected is a risk of spreading it to other people,” and that can be true of people who are infected but don’t have symptoms, Morse said.

Trump’s news conference came amid intense criticism over his mixed messages on the severity of the outbreak and over the administration’s scattershot response.

His prime time address earlier this week only added to the public confusion, and Trump has grown increasingly frustrated that his words to the nation so far have done little to calm the public or the financial markets.


The president’s mood was “as black as it has ever been” on Thursday, according to one confidant.

He has called around to allies while watching cable news coverage of the Wall Street plummet, furious that his efforts to bolster markets did the opposite, according to three White House officials and Republicans close to the White House who spoke on condition of anonymity because they were not authorised to publicly discuss private conversations.

And he has been lashing out at those around him for failing to do more, at times criticising former President Barack Obama and a familiar target, the chairman of the Federal Reserve.