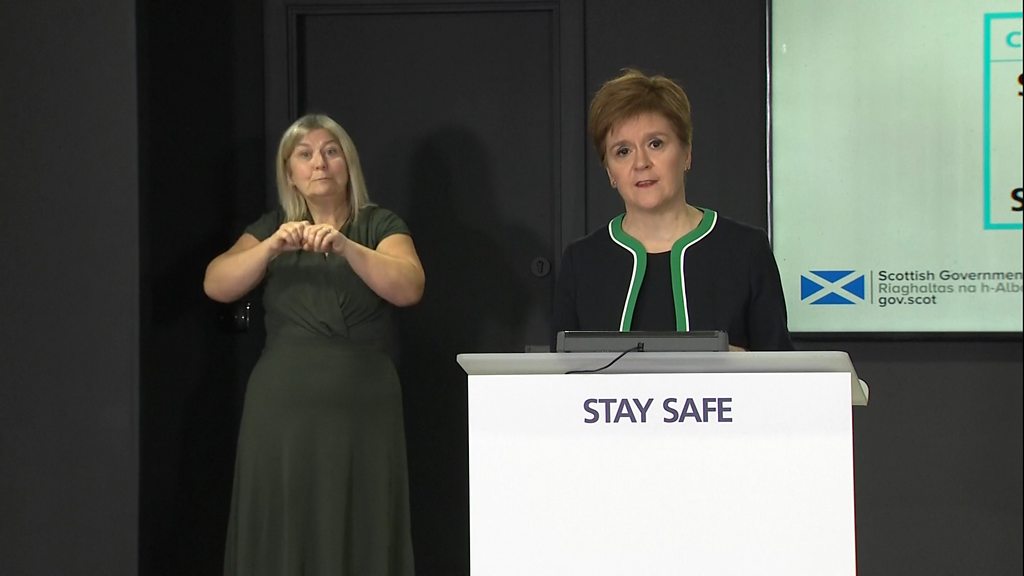 The use of face coverings in corridors and communal areas of secondary schools is set to be introduced in Scotland.

The government is in the "final stages" of consultations with teachers and councils about having pupils wear face coverings while moving between classes.

First Minister Nicola Sturgeon said she was acting in response to new guidance from the World Health Organization.

Ministers are also considering whether to make masks mandatory on school transport - but not inside classrooms.

The use of face coverings in schools is currently voluntary, although some schools have started advising staff and pupils to wear them to help combat the spread of Covid-19.

Young people returned to Scotland's schools earlier in August with no requirements for physical distancing between younger pupils, and no rules around face coverings.

However, over the weekend the World Health Organization (WHO) issued fresh guidance saying children over the age of 12 should wear masks.

At her daily coronavirus briefing, Ms Sturgeon said Education Secretary John Swinney was "in the final stages of consulting teachers and local authorities on a recommendation for the use of face coverings by staff and pupils in secondary schools when moving around corridors and communal areas".

She said there was more mixing between different groups of children in these areas, and that there was less scope for effective ventilation.

People are also thought to be more likely to raise their voices in crowded places, increasing the risk of aerosol transmission of the virus. 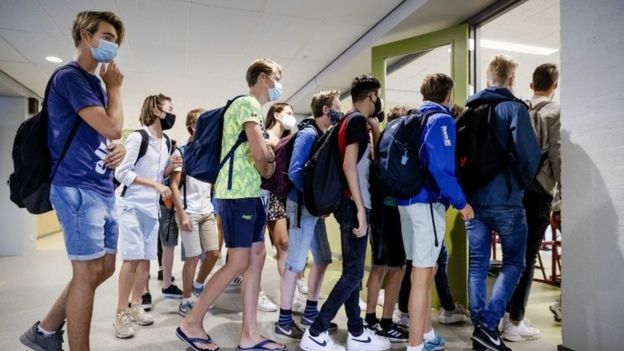 Pupils may have to wear masks indoors as they move between classes, like these Dutch teenagers

Ms Sturgeon said the government's scientific advisers were also considering whether face coverings should be made mandatory on school transport.

However, she said they were "not currently consulting on any proposal" to have pupils wear masks in class, saying: "There is greater scope for physical distancing in classrooms and face coverings are more likely to interfere with teaching and learning."

She added: "The best way to ensure schools can stay open safely is for all of us to play our part in keeping transmission rates in the community as low as possible."

Some schools in Edinburgh, Inverness and Grantown on Spey have written to parents recommending pupils wear masks due to concerns about overcrowding as they move between lessons.

The first minister said she expected the Scotland-wide move would be confirmed "over the next couple of days", and would constitute a change to guidance which schools would be expected to follow.

She said: "We are not talking about a mandatory system in the sense of there being penalties and enforcement in schools. I get the sense that schools - while I accept there will be a mixture of opinion around it - are themselves looking to follow this kind of approach.

"We will set out the detail when we get to the point of finalising the recommendation."

Under the existing guidance no-one is required to wear face coverings in school, apart from staff who have close personal contact with a pupil for an extended period of time. However, anyone who wants to wear one is allowed to do so.

A recent survey of nearly 30,000 teachers by the EIS teaching union found 41% supported the mandatory wearing of face coverings by senior pupils in classrooms.

However, one parents group - Us For Them Scotland - claimed making masks mandatory "could have an extremely negative impact on pupils with autism, hearing impairments and conditions such as asthma".

Health authorities are working to tackle a number of coronavirus "clusters" in Scotland, including one centred on the Kingspark School in Dundee.

A total of 17 members of staff have tested positive, as well as two pupils, and all households connected to the school have been told to go into self-isolation for two weeks.

A growing number of school pupils across Scotland have tested positive for Covid-19, but the government believes the infection has been transmitted in other settings such as house parties.

Ms Sturgeon said "most" transmission of the virus was not happening in schools, saying that "the risk is greater of community transmission getting into schools".

She said the current consultation was only on a "limited" use of face coverings in schools, because of "the relatively low levels of transmission we are currently seeing in the community".

However she added that "where there are outbreaks there is an option for incident management teams to recommend more extensive use of face coverings for a period to protect public health".