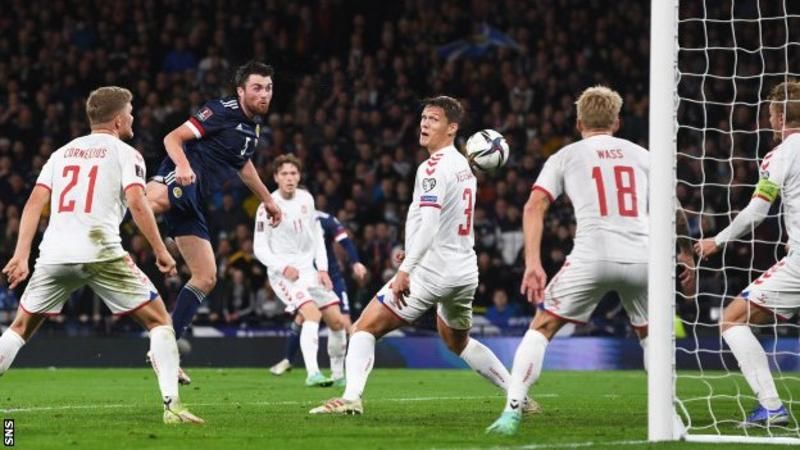 Scotland secured a seeded spot in the World Cup play-off semi-finals as goals from John Souttar and Che Adams stunned Denmark with a thrilling performance at Hampden Park.

Steve Clarke's Group F runners-up needed at least a point against the runaway leaders to give themselves a chance of a home draw.

But centre-half Souttar headed home in his first Scotland game since being sent off in a 2018 defeat by Israel and striker Adams burst clear to settle growing nerves after 86 minutes.

Scotland had lived dangerously in the closing stages before that breakaway goal secured a sixth competitive victory in succession for the first time since winning six Home Nations matches in a row between March 1928 and February 1930.

It also ended Denmark's six-game winning run since losing 2-1 to England at the semi-final stage of the Euro 2020 finals this summer and ensured they fell short of ending their qualification campaign with a 100% record.

Scotland started with real intent as, spurred on by a sea of noise from the packed stands, they began at a frenetic pace.

However, Denmark survived the early pressure to create the first chance after 10 minutes and remind Scotland of their threat.

Midfielder Daniel Wass could only knock Rasmus Kristensen's cross wide off his hip from close range before centre-half Andreas Christensen sent a thundering drive just over from 25 yards.

It took Scotland 23 minutes to fashion their first clear sight at goal as Adams' low drive was denied by a superb Kasper Schmeichel stop, the goalkeeper sending out a telescopic leg to turn the striker's effort wide.

That sparked the Scots and, after an intense spell of pressure, Liam Cooper headed a John McGinn corner to the back post back into the path of fellow centre-half Souttar to nod past Schmeichel.

What a fairytale return it was for the 25-year-old, whose career has been plagued by injury since his first trio of caps three years ago, but he still had some defending to do - and lots of it.

A Wass shot deflected off Cooper's heel and just wide of the far post before Scotland goalkeeper Craig Gordon superbly clawed away striker Andreas Cornelius close-range header either side of the break as Denmark took the game to the home side.

Scotland defended desperately and were dangerous on the break, defender Kieran Tierney's shot-come-clearance from all of 35 yards clipping the crossbar before substitute Stuart Armstrong picked out Southampton team-mate Adams to curl in the second and send the home fans into raptures.

Man of the match - Che Adams 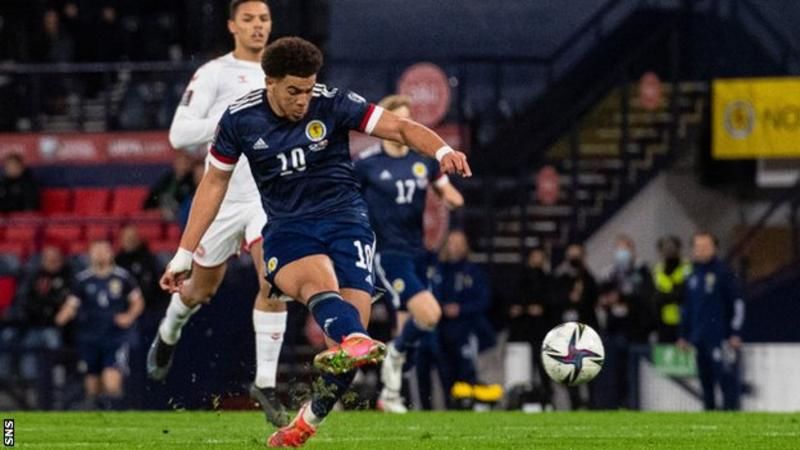 Scotland continue their improvement since a disappointing start to the qualifying campaign - and the damp squib of the Euro 2020 finals.

It will be pointed out that Denmark were without a number of key players through injury, but Scotland too were shorn of the services of striking talisman Lyndon Dykes, central defenders Grant Hanley and Jack Hendry, plus the versatile Scott McTominay.

However, this is a side with enough strength in depth to be ranked 10th in the world - 32 places above the Scots - and who had only lost one goal in their previous nine group games.

A draw would probably have meant a more difficult away tie in the semi-finals, so Clarke's side delivered when it mattered - and they did so with the bonus of no suspensions looming for the five starters for whom a booking would have been ruled out of that crucial, one-off tie.

Scotland head for a home tie in the World Cup play-off semi-finals from 24-29 March along with nine other group runners-up and two top finishers from the Nations League.