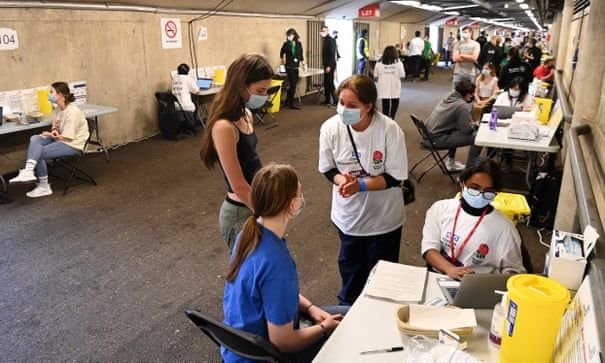 Scientists are urging the government to speed up second doses of Covid vaccines and delay a decision on easing lockdown restrictions in England on 21 June in an effort to tackle the creeping spread of new cases.

The situation has led some scientists to warn the country is in the early stages of a third wave of coronavirus which, despite the vaccination programme, modelling suggests could lead to a rise in hospitalisations and deaths, and that full easing of restrictions in England in three weeks’ time should be reconsidered.

The British Medical Association called on the prime minister, Boris Johnson, to honour his pledge to lift measures based on “data, not dates” and said the government should hold off giving the green light to progressing to stage four of the roadmap “until the latest data can be scientifically considered”.

“We are at a pivotal moment,” said the BMA council chair, Dr Chaand Nagpaul, who warned a “premature” ending of all legal restrictions may result in a surge of infections that “would undermine our health service” and undo all the progress made suppressing Covid-19. “We cannot afford to repeat past mistakes,” he said.

Labour accused the government of being distracted by the turbulence resulting from Dominic Cummings’ bombshell claims last week.

Jon Ashworth, the shadow health secretary, said the single biggest threat to the 21 June reopening was “ministerial incompetence”, and claimed members of the cabinet were engulfed “by internal rows and blame shifting at just the moment we need a laser-like focus on this variant”.

Ministers have been unable to say in recent days whether the 21 June unlocking will be delayed or only implemented partially. George Eustice, the environment secretary, told the BBC on Monday that infection rates are “going up again slightly but from a low base” which was “probably to be expected, given there are a significant number of younger people who are now out and mixing but haven’t had the vaccine”.

But despite guidance that adults under 30 not in a priority group are still ineligible for a jab, a vaccination centre at Twickenham Stadium in London began offering injections to all over-18s in an attempt to avoid wastage – causing large queues of what appeared to be largely young people outside.

In the run-up to the official announcement expected on 14 June about what will happen the following Monday, government scientists on the Scientific Pandemic Influenza Group on Modelling (SPI-M) have been asked to model how the India variant and other factors could affect cases if restrictions are lifted. A No 10 source said the government was continuing to monitor the data closely.

Calls for further delay in easing restrictions were met with concerns from the hospitality sector. Kate Nicholls, the chief executive of UK Hospitality, told BBC News that not being able to fully reopen in June would be devastating for venues. She said many were operating at 60% capacity and “haemorrhaging cash”. A delay would “push them closer to the cliff edge of business failure”, she added.

Some experts have called for the gap between the first and second Covid jabs to be reduced to eight weeks for all adults in order to tackle rising number of cases. Second doses have already been brought forward for priority cohorts 1 to 9, which included health workers and elderly people, while efforts to get the first dose to other adults has been ramped up, particularly in areas with high levels of the India variant. 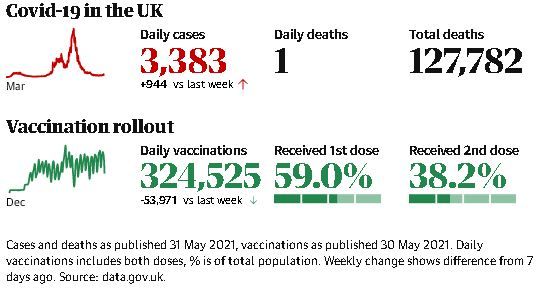 Prof Lawrence Young, a virologist at the University of Warwick, told the Guardian that while a longer interval between first and second jabs resulted in a stronger and longer protective immune response, it was necessary to accelerate second doses more widely.

“The importance of full vaccination is now becoming even more obvious with real-world data showing how it protects from infection and spread of the Indian variant. We need to do everything we can to speed up vaccination, particularly second shots,” he said.

Prof Danny Altmann, an expert in immunology of infectious disease at Imperial College London, also backed an acceleration of second doses beyond priority groups, adding he was concerned about the current situation.

“When we speak of a third wave … we mean resetting the clock yet again, as happened to us with the Kent variant. Having got this far, why not hold our nerve and do the job properly,” he said. “I’m disturbed that we may be drifting into a plan to tolerate long-term endemic virus – at a cost – while other countries aim for elimination. This is too important to drift to without debate.”

However, Prof Adam Finn of the University of Bristol, a member of the Joint Committee on Vaccination and Immunisation, urged caution, noting that the schedule for doses involved balancing a number of factors.

At present, he said, available vaccines were being used either to give second doses to the most vulnerable, or a first dose to others – few of whom are near the timeframe for a second dose in any case. Furthermore, reducing the dosing interval for these groups would reduce their overall protective immune response, and could delay delivery of the first doses to others.

The debate came as data from the Wellcome Sanger Institute, which tracks the variants detected in Covid-positive samples through genome sequencing, revealed the variant has spread further across England.

While parts of north-west England, such as Bolton and Blackburn with Darwen, have previously been identified as hotspots for the India variant, the data shows that in the two weeks to 22 May it cropped up in areas as far afield as Babergh, Wycombe and Cornwall – although numbers in these areas remain low. This data includes Covid-positive samples analysed for general surveillance and surge testing, but not those related to travel.

The Department of Health and Social Care said: “We are working in partnership with local authorities to put in place additional measures to help control the spread of Covid-19 variants and rapidly break chains of transmission.

“It is imperative we all continue to be vigilant and keep following current guidance on social distancing, and come forward for a vaccine as soon as eligible.”