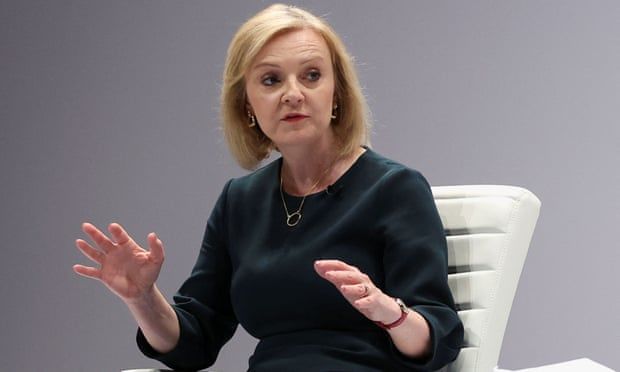 A judge has ruled that the government must reveal the majority of passages in internal documents relating to a controversial policy to send asylum seekers to Rwanda.

The foreign secretary, Liz Truss, made an application to the high court asking for public interest immunity to be granted to withhold 10 passages of two internal documents from disclosure that she said could damage international relations and breach national security if they were publicly revealed.

Lord Justice Lewis refused to grant public interest immunity on six of the 10 extracts but granted it in the remaining four. The ruling that the majority of the extracts should be disclosed is likely to be a blow to the government.

The judge ruled the passages must be disclosed to claimants before a high court hearing on 5 September to determine whether or not the policy of sending some asylum seekers who arrive in the UK to Rwanda was lawful.

During the application hearing, the court heard that a Foreign Office official raised concerns about plans to send asylum seekers to Rwanda, citing state surveillance, arbitrary detention, torture and killings by the country’s government.

The Guardian, the BBC and the Times made submissions to the court urging disclosure of these 10 passages, arguing that this was in the public interest.

Groups challenging the lawfulness of the Rwanda policy – the PCS union, Care4Calais, Detention Action and some asylum seekers – say the passages should be made public.

Christopher Knight, representing some of the claimants, cited one document from a Foreign Office official that stated: “There are state control, security, surveillance structures from the national level down to [households]. Political opposition is not tolerated and arbitrary detention, torture and even killings are accepted methods of enforcing control too.”

The 10 passages the government asked the court to allow it not to disclose were contained in a draft country policy and information note about the asylum system and related human rights issues in Rwanda, and in an accompanying email – five comments in each document.

The judge ruled that there was “public interest” in the court having access to some of the material. He added that some of it was already in the public domain.

His judgment states: “I recognise strong public interest in not undermining international relations with a friendly state (Rwanda). Nonetheless that consideration is outweighed by the public interest in ensuring access to relevant information in this litigation.”

The decision means the six passages, barring a few words, will not be kept secret during the high court hearing on 5 September. The other four passages will not be disclosed.

Bella Sankey, the director of the charity Detention Action, which is one of the claimants in the case, said: “The development of Priti Patel’s UK-Rwanda deal is deeply controversial and of huge public interest. We welcome the court’s decision to refuse the majority of requests for public interest immunity made by the Foreign Office. Especially with such a divisive, costly, and potentially dangerous policy, it’s essential that the media and public can know the facts about the Rwanda policy before they cast judgment on it.”

Clare Moseley, the founder of the charity Care4Calais, another of the claimants in the Rwanda case, welcomed the fact that most of the passages the government did not want to disclose, could now be disclosed to the claimants: “This is essential information that the public has a right to know. If we are to go down the path of this shockingly brutal policy – a policy that could make the public compliant in human rights violations – then the public have a right to scrutiny of the decisions made.”

A government spokesperson said: “Rwanda is a safe and secure country with a track record of supporting asylum seekers. We have a strong relationship with the Rwandan government and are proud to be working together to deliver on this world-leading migration and economic development partnership with them – we remain committed to implementing the policy, which will help break the business model of criminal gangs and save lives.”