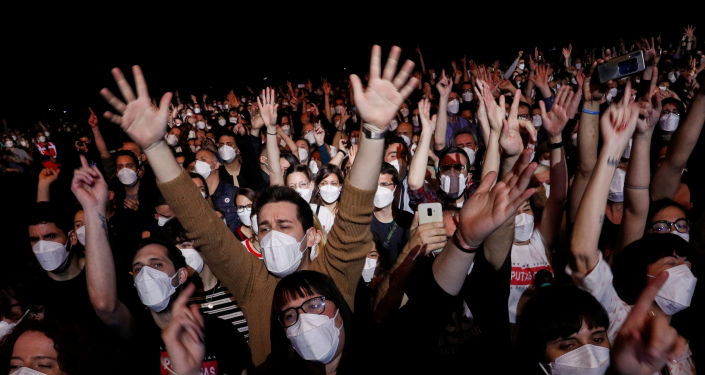 Tickets for the event were priced between 23 and 28 euros, which included the cost of a coronavirus test and compulsory face mask that had to be worn during the event.

Some 5,000 people attended a rock concert at the Palau Sant Jordi concert hall in Barcelona on Saturday night after passing a coronavirus test on the day of the event.

According to The Guardian, those who purchased tickets for the show underwent a “quick antigen test” at three venues in the city, with people who tested negative receiving a code on their cellphones to validate their tickets.

During the event, concertgoers were made to wear “high quality face masks” that were provided by the show’s organisers.

"We were able to evade reality for a while," said Jose Parejo, 40. "We were inside our small concert bubble. And we were even able to remember back in time when things like this one were normal. Things that nowadays aren’t that normal, sadly."

The sold out tickets cost between 23 and 28 euros and included the cost of both the COVID-19 test and face mask.

The show’s organisers said that it was the first commercial event with such a large audience to be held in Europe amid the pandemic, the newspaper notes.

Some 3,247,739 coronavirus cases and 74,420 deaths have been confirmed in Spain since 3 January 2020, according to the World Health Organisation.