World leaders have been reacting to Rishi Sunak's victory in the race to be the next British prime minister.

Many offered their congratulations, and expressed hope for stability after a "turbulent" few weeks. 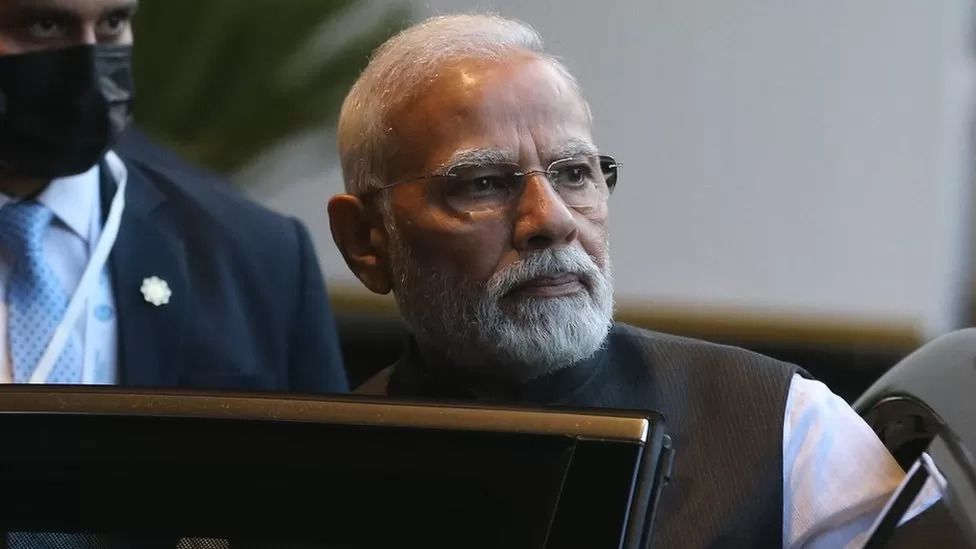 What the leadership is saying: "As you become UK PM, I look forward to working closely together on global issues, and implementing Roadmap 2030," Prime Minister Narendra Modi tweeted, referring to a framework agreement struck between the two countries. "Special Diwali wishes to the 'living bridge' of UK Indians, as we transform our historic ties into a modern partnership."

What the press is saying: Mr Sunak's appointment has been big news in India, with Indian news channels breaking into rolling coverage. "Indian son rises over the Empire, history comes full circle in Britain," was how one channel put it.

The background: It is no surprise that there is a lot of interest in Mr Sunak's rise in India. His grandparents come from Punjab, while his father-in-law is Narayana Murthy, the founder of Infosys and one of India's best-known businessmen. Sunak is also a Hindu who took his oath as MP on the Hindu holy book the Bhagavad Gita. India and the UK have been trying to strike a free trade deal, but talks reportedly stalled over fears among Sunak's party it could lead to more immigration. 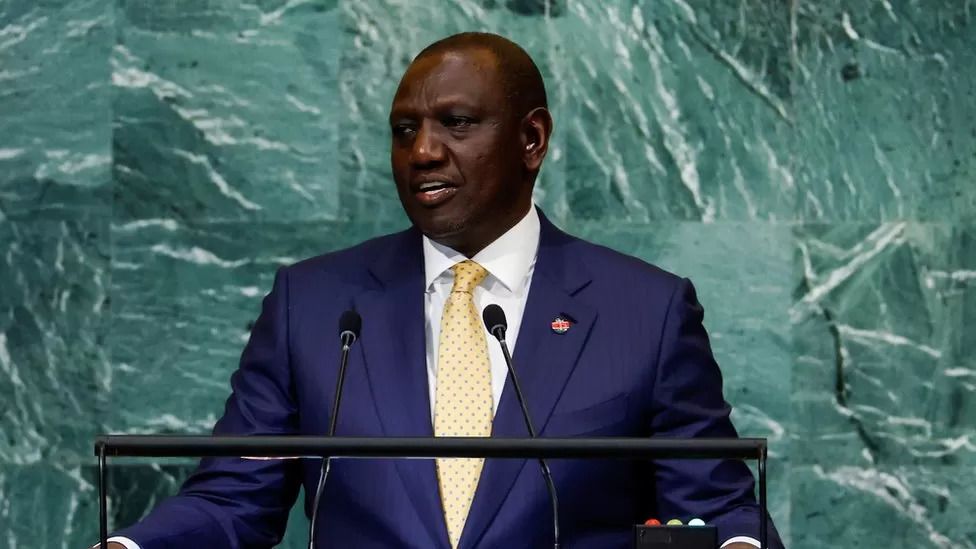 What the leadership is saying: Kenya's president, William Ruto, has yet to comment publicly on Mr Sunak's new position.

What the press is saying: The Taifa Leo newspaper called Mr Sunak's rise another "Barack Obama moment". "Sunak's case is nearly similar to that of former US President Barack Obama, who is an American citizen but has Kenyan roots as his father was born in Homa Bay County," Citizen Digital website said. Popular newspaper commentator Macharia Gaitho said "Kenya has conquered the British Empire".

The background: Mr Sunak's father, Yashvir, was born in colonial Kenya to parents who had moved from Gujranwala, now in Pakistan, in the 1930s. Mr Sunak's father moved to the UK in the 1960s, where he became a GP. 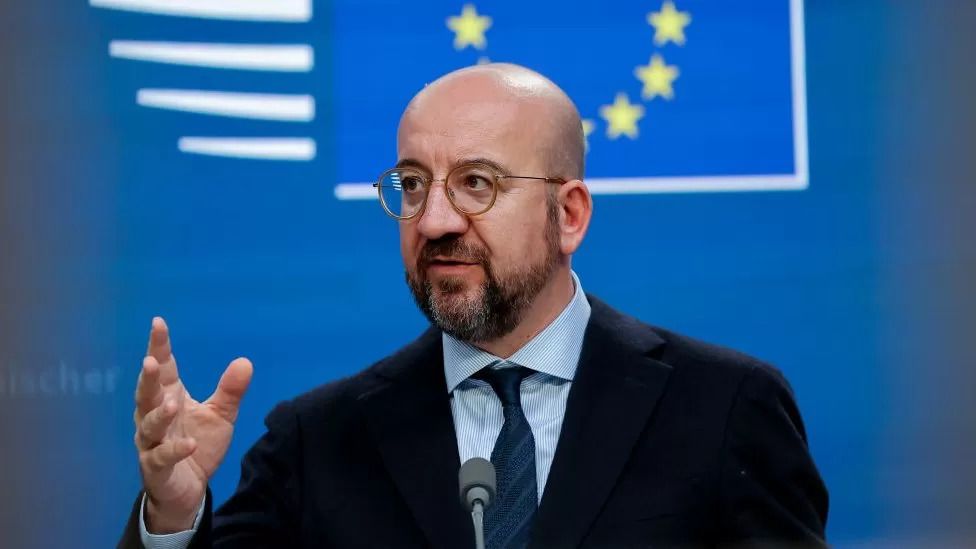 What the leadership is saying: European Council President Charles Michel said: "Working together is the only way to face common challenges... and bringing stability is key to overcoming them."

The background: Rishi Sunak is a Brexit supporter, but many EU leaders will have breathed a sigh of relief that he, not Boris Johnson, is taking over as prime minister, our Europe editor Katya Adler says. He is considered a pragmatist, and EU officials will want to work with him on rising energy costs, and the difficult issue of the Northern Ireland protocol, an important trading arrangement struck during Brexit talks.

During the August leadership contest, Mr Sunak said a trade war with the EU was not in the UK's interest. But finding compromise may be politically difficult for him, and Brussels fears he might shun working with the EU to protect his political support at home. 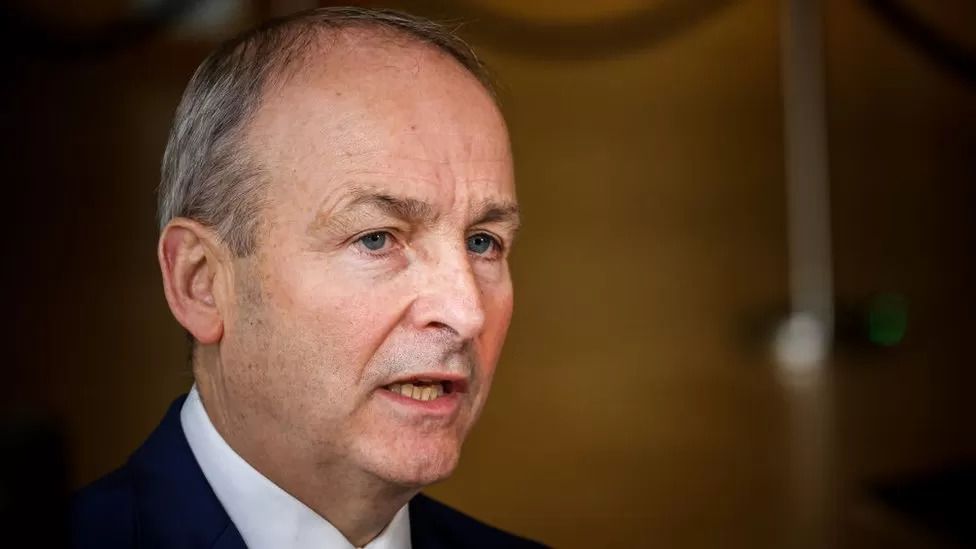 What the leadership is saying: Irish PM Micheál Martin said he looked forward to working with Mr Sunak, "on the important issues we face on these islands and globally".

What the press is saying: The Irish Times welcomed Mr Sunak's reputation for "sensible politics", but said he will face challenges, particularly with Brexit. It is not yet clear what his election means for the Northern Ireland protocol, the paper said. The Irish Independent said the new prime minister had been "vindicated" after the "folly" of Ms Truss's tax cuts.

The background: Brexit remains one of the key issues between the UK and Ireland, with the Northern Ireland protocol now at the forefront of the agenda. Currently, goods being imported from Britain are checked before entering Northern Ireland. But the UK government previously called for a two-tier system, with checks only being conducted on goods destined for onward travel to the republic. 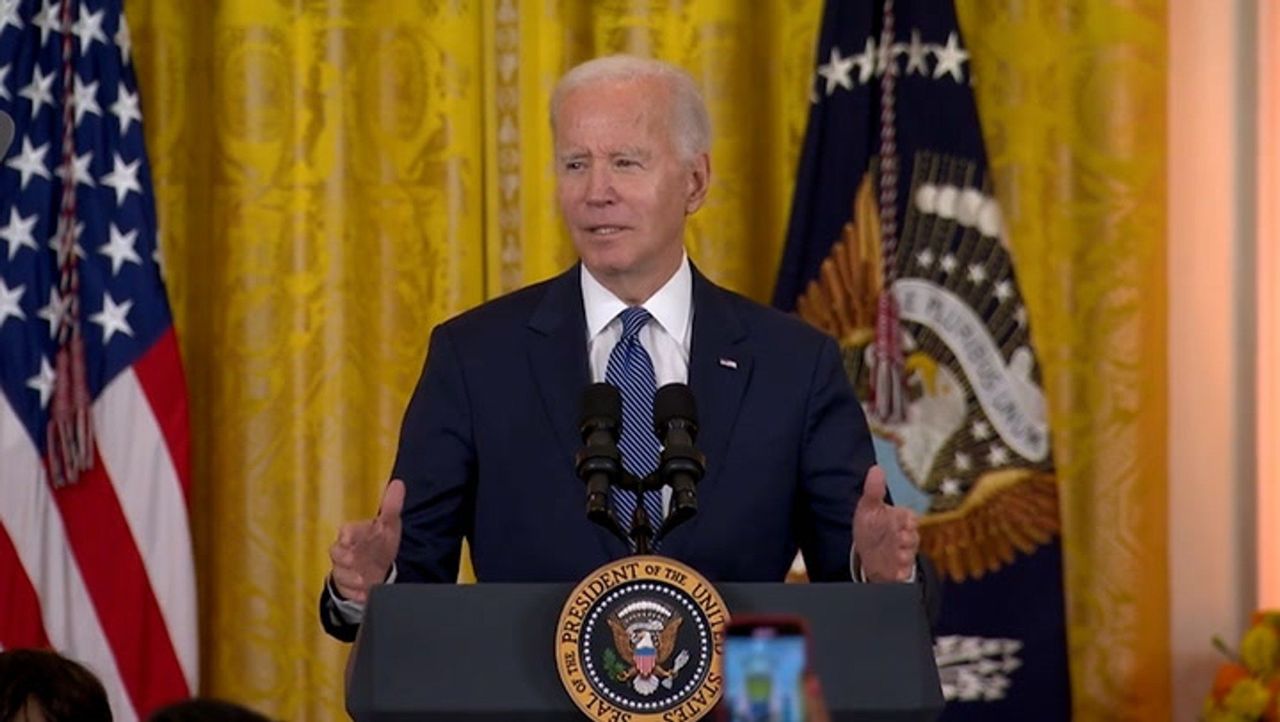 What the leadership is saying: At a White House event to mark the Hindu holiday of Diwali, President Biden described Mr Sunak's nomination as the UK's next prime minister a "ground-breaking milestone". The US president is holding back on formally congratulating Mr Sunak until he has met King Charles and been asked to form a government, as protocol dictates.

What the press is saying: The New York Times lauds the "record of representation" built by the Conservatives in recent years, saying Mr Sunak's victory is another milestone in a history of promoting women and people of colour to prominent positions. The Washington Post also emphasised Mr Sunak's position as the first person of colour to be prime minister. The paper added that it would be "the first time in history that the residents of Downing Street are richer than those of Buckingham Palace".

The background: Joe Biden has already said he would maintain a "close relationship" with whoever succeeded Ms Truss. He called her abandoned plans to cut taxes a "mistake", causing some eyebrows to be raised - US presidents tend to avoid commenting on allies' domestic policies. 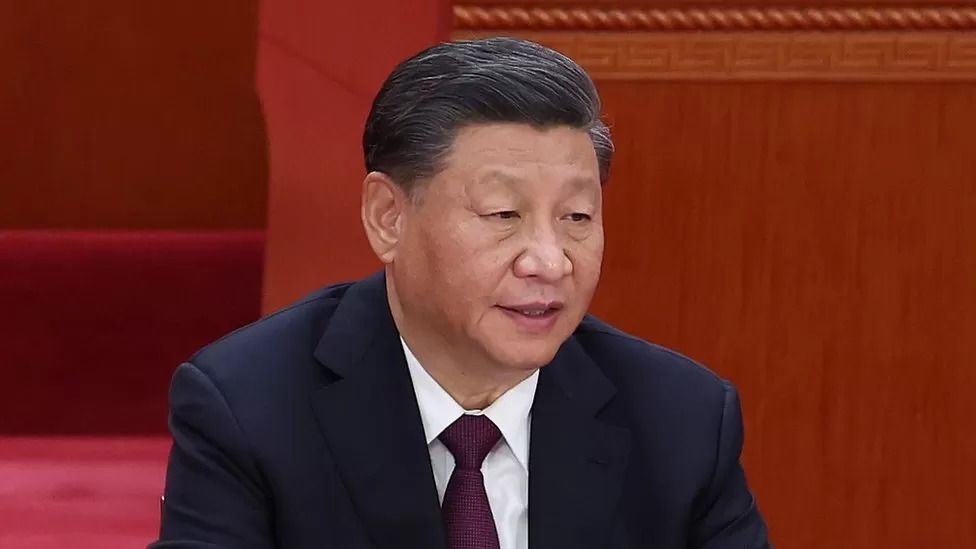 What the leadership is saying: China wants to "advance ties with the UK" under Sunak, Foreign Ministry spokesman Wang Wenbin said. He added: "We hope that we can work with the UK side on the basis of mutual respect and win-win co-operation and advance China-UK relations along the right track."

What the press is saying: State-run CGTN highlighted reports that Mr Sunak will be the first prime minister to be richer than the monarch. "His experience managing the UK's finances, and in particular his strongly-voiced opposition to Truss' disastrous plans for borrowing-funded tax cuts, prompted many in the party to view him as the safest choice," it said. Shanghai-based The Paper wrote that Sunak's victory "would appear to signal a new achievement in his efforts to overcome racism in British politics" but that it "could not overshadow his other controversies", mentioning the BBC video clip of him saying he had no working class friends in 2007, and his wife's previous non-domiciled status which excused her from paying some tax.

The background: Rishi Sunak has favoured closer ties with China than his predecessor, and was criticised by Ms Truss for pursuing a trading relationship when chancellor. Ms Truss spoke of a need to avoid "dependency" on China, and during the summer leadership race said she would declare the country a "threat" to national security - a label already given to Russia. She also was reported to have privately supported declaring China's actions against Uyghur Muslims in Xinjang a genocide. 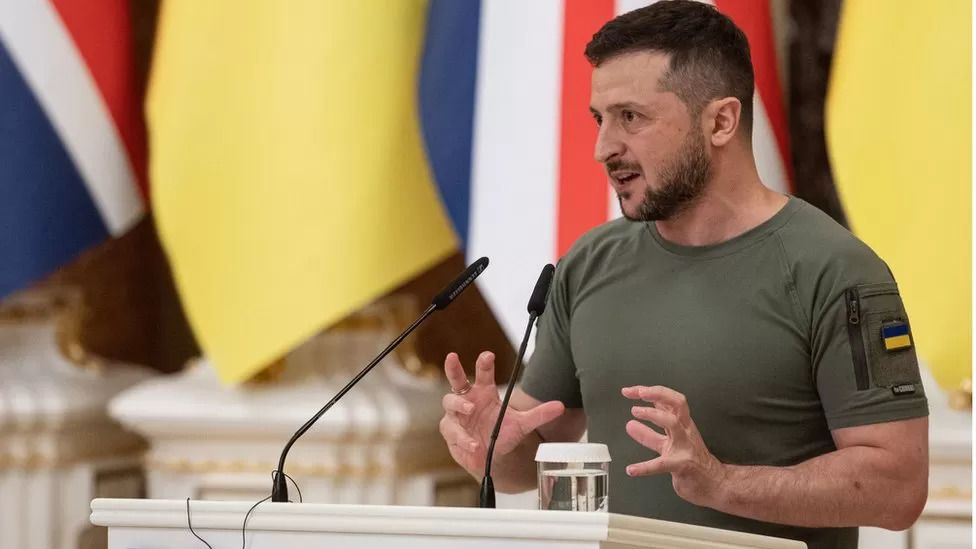 What the leadership is saying: President Zelensky tweeted his congratulations to Mr Sunak. "I wish you to successfully overcome all the challenges facing British society and the whole world today. I'm ready to continue strengthening the Ukraine-UK strategic partnership together!" he said. Oleksandr Kornienko, the First Deputy Chairman of Ukraine's parliament, said he welcomed Mr Sunak as a "colleague". He added: "Congratulations to the people of Great Britain on the fact that they have political stability again. After a short stage of turbulence."

What the press is saying: The Glavkom website said both Rishi Sunak and Boris Johnson would have been "good news" for Ukraine. Mr Sunak's remarks on Ukraine so far have been "promising", the website said, contrasting his statement in a debate that he does not want to meet Vladimir Putin with Liz Truss's readiness to speak to the Russian president.

The background: UK policy towards Ukraine will not change under Mr Sunak. During the summer leadership contest, he said he would continue backing Ukraine, and make an early visit to Kyiv. But while Ms Truss promised to increase defence spending from 2% to 3% of national wealth - measured by gross domestic product - by 2030, Mr Sunak has said that target was "arbitrary" and "not a plan". 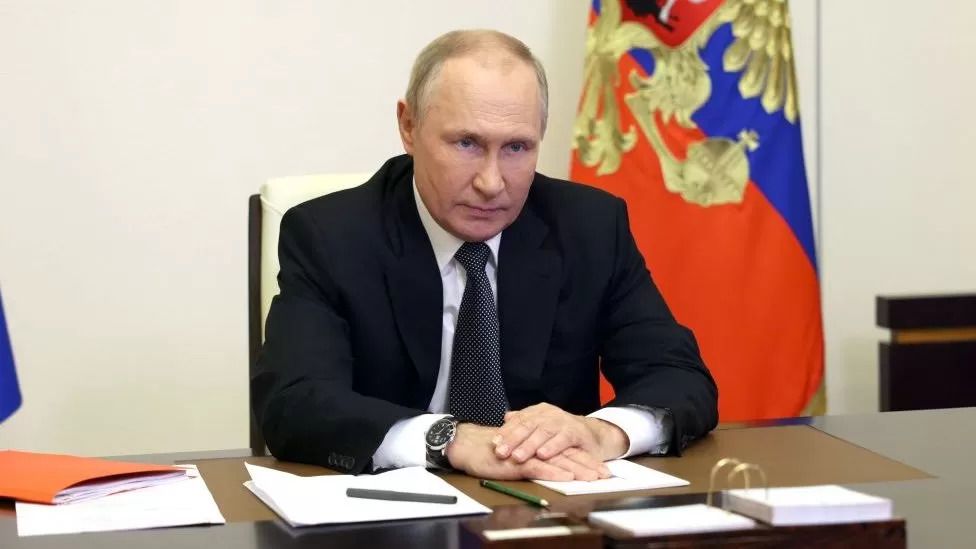 What the leadership is saying: Russia sees no reason to expect relations with the UK to improve under Mr Sunak, the Kremlin said on Tuesday.

What the press is saying: All three main TV channels - the state's official Rossiya 1, state-controlled Channel One, and Gazprom-Media's NTV - have pointed out that Mr Sunak was elected unopposed. TV's London correspondent Liza Gerson said this was an example of "British democracy not for everyone" - with Sunak voted in by so few that it amounted to a statistical "margin of error". Channel One correspondent Timur Siraziyev said Mr Sunak was toeing his party's line on Ukraine - "to keep the conflict in Ukraine going as long as possible" - and it was therefore "not to be expected that with the advent of the new prime minister, relations between our countries will improve".

The background: Russia-UK relations have soured even further since Russia's invasion of Ukraine in February. The UK responded with several rounds of sanctions, and it is one of the main backers of President Zelensky. The UK has also provided substantial military support to Ukraine. 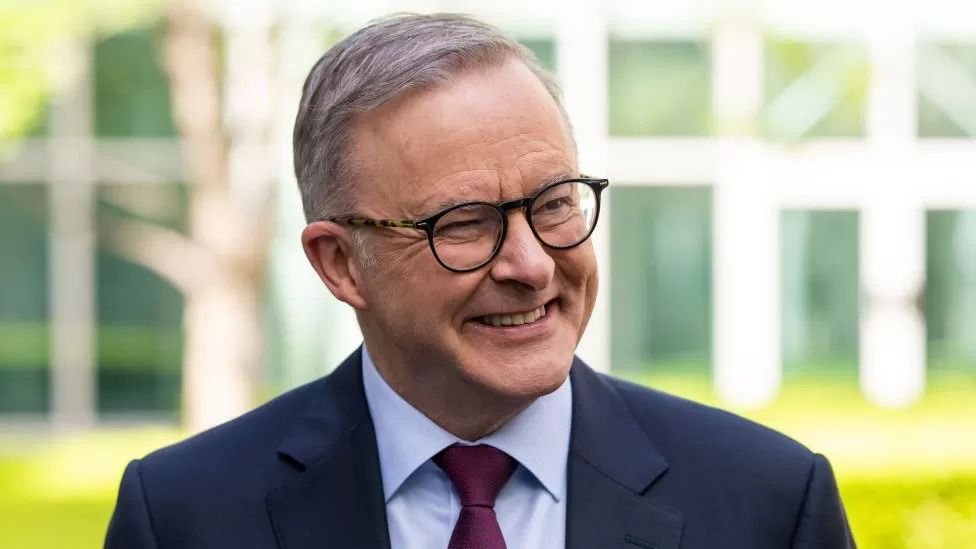 What the leadership is saying: Treasurer Jim Chalmers called Mr Sunak a great friend of Australia. "I don't think it's insignificant a country like the United Kingdom has its first prime minister of colour," he said.

What the press is saying: "Sunak — one of the richest men in the House of Commons — may not be breaking the Tory tradition of elevating Oxford-educated elites, but his leadership will be historic. He will be Britain's first prime minister of colour."

The background: Mr Sunak previously criticised the trade deal with Australia and New Zealand that Liz Truss negotiated as trade secretary, calling it "one-sided", and saying the UK "shouldn't be rushing to sign trade deals as quickly as possible".