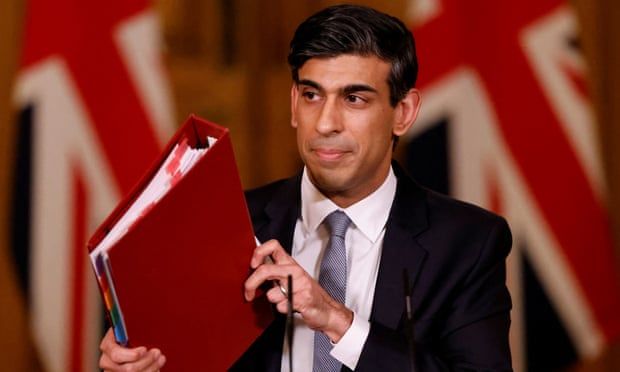 Failure to maintain Covid support measures will push firms into bankruptcy, says Labour
Rishi Sunak has rejected business demands for an extension of the furlough scheme and business rates relief, despite a four-week delay in the easing of Covid-19 restrictions previously set for 21 June.

It came as Boris Johnson announced the government roadmap out of lockdown in England would be delayed by up to four weeks, amid a rapid rise in cases of the Delta Covid variant first detected in India.

With only a week before all pandemic restrictions were due to be removed, sources close to the chancellor said he believed sufficient economic support measures were already in place to cope with a delay. Two sources said Sunak had intentionally “gone long” at the March budget by announcing furlough would last until September for exactly this reason.

However, the scheme will force employers to contribute 10% of an employee’s wage from the start of July, rising to 20% in August, as taxpayer support is cut from the current level of 80%. Employees will continue to receive the same amount.

A business rates holiday will end at the same time, while commercial landlords can also demand rent in full from 1 July – when a moratorium on demands for commercial rent arrears expires – unless the government brokers a deal spreading the financial burden. Officials are understood to be trying to reach an agreement by the end of the week that would mean landlords accepting they will never recover some rent accrued during the pandemic.

Ed Miliband, the shadow business secretary, said many businesses are worried about economic support being removed while they are still unable to trade or profit. “The price of any delay to the roadmap must not be paid by businesses,” he said.

“Nightclubs and live music venues, many restaurants and bars, the events, arts and wedding industries are still seriously affected by restrictions but they have repeatedly been left in the dark about economic support. It must remain in step with public health restrictions.”

Kate Nicholls, chief executive of trade body UK Hospitality, said the combination of rent payments and the reintroduction of business rates – albeit at a reduced rate – could be a “final nail in the coffin” for some firms.

“That will be a real problem where you suddenly have a big amount of money to pull out but your revenues are still suppressed,” she said.

The hospitality industry has previously warned that a four-week delay to the easing of restrictions – including an end to limits on how many people can meet indoors – could cost struggling businesses £3bn and put 200,000 jobs at risk.

Dr Roger Barker, the director of policy at the Institute of Directors, a business lobby group, said: “We are now approaching a cliff edge, with government support for business ending or beginning to taper off. It is vital that this support is pushed out commensurately with the lockdown extension.”

The Treasury is understood to believe there are sufficient support measures targeted at businesses in the hardest-hit sectors of the economy, with millions of pounds still available for struggling firms through local authority grants and the government’s £1.57bn cultural recovery fund for theatre and arts venues.

Retail, hospitality and leisure businesses have been offered 100% relief on business rates – the tax paid on the premises they occupy – since last March. It is due to be cut to 66% from 1 July but will remain in place until the end of March 2022.

The chancellor’s resistance to a furlough extension also comes as hospitality businesses report problems with finding enough workers, amid widespread shortages across the country after the easing of lockdown this spring.

While millions have come off furlough in recent months, more than 2.1 million people were still on emergency coronavirus job support in mid-May – including up to a fifth of the total hospitality workforce.

The Bank of England expects the jobless rate to peak at almost 5.5% after furlough ends, compared with 4% – or about 1.3 million people – before the pandemic.

The figures fall a long way short of the initial fears, last year, that unemployment could reach 12% as a result of what was expected to be the worst recession in 300 years.

A spokesperson for the Treasury said: “The furlough scheme is in place until September – we deliberately went long with our support to provide certainty to people and businesses over the summer.

“The number of people on the furlough scheme has already fallen to the lowest level this year, with more than 1 million coming off the scheme in March and April – showing our plan for jobs is working.