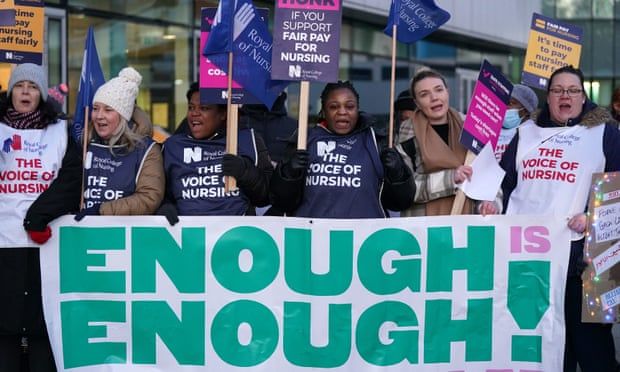 Rishi Sunak has insisted he will not back down against striking workers, as nurses walked out in England, Northern Ireland and Wales for a second day.

Nurses' union boss Pat Cullen has urged the prime minister to resolve the crisis before Christmas.

But there is no sign of a breakthrough between the sides.

Speaking to MPs, Mr Sunak argued the best way to help workers would be to reduce inflation as quickly as possible.

The UK is facing its biggest week of industrial strikes in recent history in the run up to Christmas, with ambulance workers, customs and immigration staff, bus drivers and postal workers all staging walk outs.

The armed forces have been drafted in to cover some jobs - but concern is growing about Wednesday's ambulance drivers strike in England and Wales, with a health minister warning people to avoid "risky activity".

Head of the NHS confederation, and a former Labour adviser, Matthew Taylor has warned that hospital leaders cannot guarantee patient safety during the strikes.

In a letter to Mr Sunak, he said: "It is clear that we have entered dangerous territory and we hope this warning from NHS leaders should serve to focus minds in government and in the unions that a swift resolution to this damaging dispute is needed."

Mr Sunak is facing calls to reopen talks on nurses' pay and deal with the growing wave of strikes across the public services.

Conservative backbencher Sir Geoffrey Clifton-Brown said that both sides "need to get round the table and see what can be done."

But addressing the Liaison Committee of senior MPs Mr Sunak said: "I've acknowledged it is difficult for everybody, because inflation is where it is.

"The best way to help them and help everyone else in the country is for us to get a grip and reduce inflation as quickly as possible."

He said sticking to the wage levels set by the pay review boards earlier this year was an important part of tackling high inflation.

Despite the prime minister's insistence that he is holding firm, some Conservative MPs have said he will need to budge on nurses' pay.

So far only a handful have said so publicly, but others have expressed concern in private conversations with the BBC.

One former minister said the government would have to shift eventually and come up with more money,

Another suggested ministers should consider offering a slightly increased offer, albeit still well below the 19% being called for, or a one-off payment to help with rising prices.

A third senior Conservative added: "I'd be surprised if the pay offer as is on the table wins - unless they are prepared to carry this on for six months."

However, even behind the scenes, government officials do not want to get into details about possible compromises.

And some Tory MPs are urging the PM to maintain his stance, fearing any concessions would encourage future strikes.

"Give in to one group then the whole lot will cascade around him," said one former minister.

Earlier, the general secretary of the Royal College of Nursing said she was "truly sorry" for every patient who would have their care disrupted.

Speaking to the BBC's Today programme, Ms Cullen said she would negotiate with the government, saying "we won't dig in if they don't dig in."

"But we have no opportunity to do that because we can't get to a table to talk to government."

She has warned that if the government isn't "prepared to do the right thing" her union would have "no choice" but to continue striking in January.

The Royal College of Nursing has called for a 19% pay rise (5% above the RPI inflation rate) but the government has said this is unaffordable.

Ambulance staff - who are set to walk out on Wednesday - also want above-inflation pay rises, but have not set a specific figure.

Health Secretary Steve Barclay met unions ahead of the strike on Tuesday afternoon, however Unite representative Onay Kasab described the meeting as "entirely pointless" because Mr Barclay had refused to discuss pay.

Following the meeting, Mr Barclay said the pay demands were "unaffordable" but added that he was open to "engaging with unions on how to make the NHS a better place to work".

WATCH: Rishi Sunak is asked to give a personal message to NHS workers and others taking strike action

WATCH: Ambulance staff are tired of waiting outside hospitals with patients, says GMB