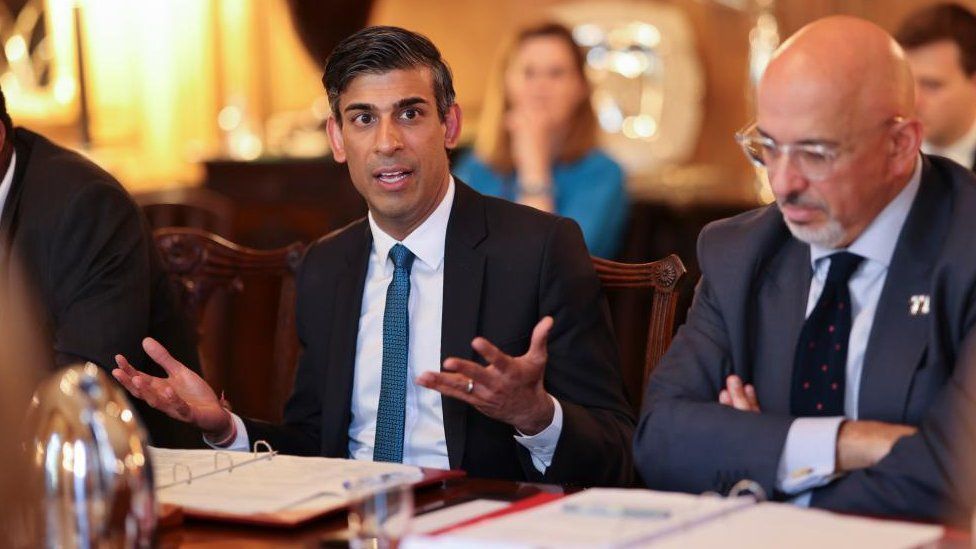 Prime Minister Rishi Sunak has asked his independent ethics adviser to look into the disclosures made about the tax affairs of Nadhim Zahawi.

Mr Sunak said there were "questions that need answering" over the case.

Tory party chairman Mr Zahawi is facing calls to resign, after it emerged he paid a penalty to HMRC over previously unpaid tax while he was chancellor, as part of a multi-million pound dispute.

He said he was "confident" he had "acted properly throughout".

On a visit to a hospital in Northamptonshire, Mr Sunak told reporters: "Integrity and accountability is really important to me and clearly in this case there are questions that need answering.

"That's why I've asked our independent adviser to get to the bottom of everything, to investigate the matter fully and establish all the facts and provide advice to me on Nadhim Zahawi's compliance with the ministerial code."

He added that Mr Zahawi would remain Tory Party chairman during the investigation and had agreed to "fully cooperate".

In a statement, Mr Zahawi said he welcomed the investigation and looked forward to "explaining the facts of this issue" to Sir Laurie Magnus, the prime minister's independent adviser on minister's interests.

He added: "In order to ensure the independence of this process, you will understand that it would be inappropriate to discuss this issue any further, as I continue my duties as chairman of the Conservative and Unionist Party."

However, opposition parties called for Mr Zahawi to be sacked from his role straight away.

Allies of Mr Zahawi have told the BBC he is determined to stay on as Tory Party chairman, despite growing pressure over his tax affairs.

On Saturday, Mr Zahawi confirmed he had made a payment to settle a dispute with HM Revenue & Customs (HMRC).

The BBC understands the dispute was resolved between July and September last year, when he was chancellor, and that the total amount paid is in the region of about £5m, including a penalty.

The Guardian had previously reported that Mr Zahawi paid the tax he had owed, as well as a 30% penalty, with the total settlement amounting to £4.8m.

Mr Zahawi said HMRC accepted the error was "careless and not deliberate".

The tax was related to a shareholding in YouGov, the polling company he co-founded in 2000 before he became an MP.

Mr Zahawi has not confirmed how much his penalty amounted to, nor the total value of the final settlement with HMRC.

Although the BBC has been told the issue was resolved while Mr Zahawi was chancellor - and the minister ultimately responsible for HMRC - it is still not clear when he originally became aware of it.

His allies claim he told the government's Propriety and Ethics Team - which is in charge of ensuring ethics across government departments - about it before his appointment as chancellor.

After he became chancellor, Mr Zahawi did not seek to challenge HMRC's demands, but instructed his accountants to pay all of what they said was due, the BBC has been told.

Labour leader Sir Keir Starmer said launching an investigation was "not enough" and Mr Zahawi could not stay on as Tory Party chairman.

He said the idea that Mr Zahawi could be discussing his own tax affairs with HMRC while he was chancellor was wrong.

"The prime minister should sack him, and sack him today and show some leadership," he said.

Scotland's First Minister Nicola Sturgeon accused Mr Sunak of "kicking [the issue] into the long grass" by launching an inquiry.

The SNP leader said Mr Zahawi's position was "untenable" and he should resign or be sacked.

The Liberal Democrats also called for Mr Zahawi to be sacked, or suspended while the investigation continued.

"The gear-change from 'nothing to see here' to ordering a major ethics investigation in just a few days, puts Sunak's own judgment in the spotlight once again," the party's deputy leader Daisy Cooper said.

Downing Street said Mr Sunak was not aware last week that Mr Zahawi had paid a penalty to settle his dispute with HMRC.

The prime minister's official spokesman said the investigation by his ethics adviser would focus on "potential breaches of the ministerial code relating to ministerial declarations".

However, he said the investigation could also look at whether Mr Zahawi's tax arrangement was suitable for a minister.

He added that Mr Sunak still has confidence in Mr Zahawi and hoped the investigation would be completed "as quickly as possible", although he could not give a timeline.

Watch: "Integrity and accountability are really important to me", says Rishi Sunak

Nadhim Zahawi is not going to resign and the PM should sack him, says Sir Keir Starmer