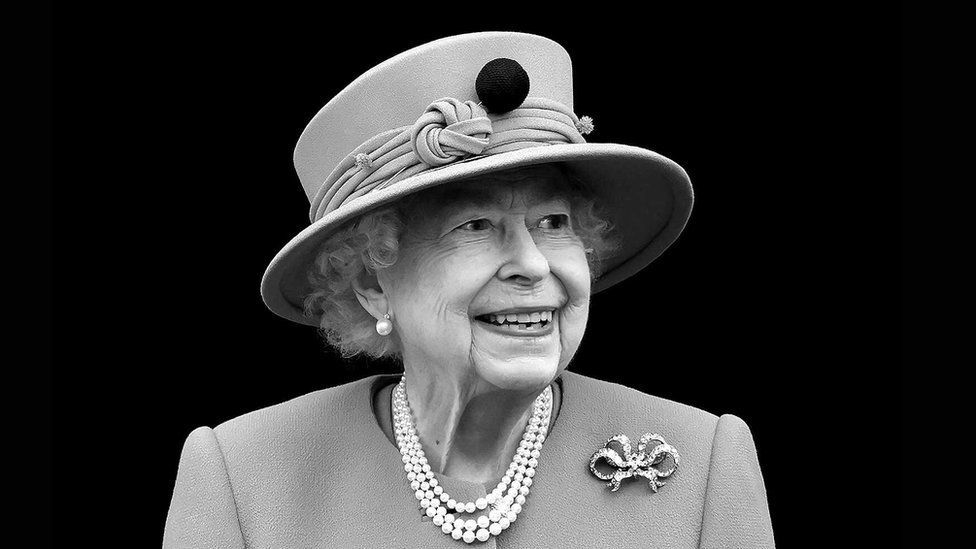 Queen's funeral plans: What will happen on the day

Preparations are being made for the state funeral of Queen Elizabeth II when the nation will say a final farewell to Britain's longest-reigning monarch.

It will be a day of emotion, pomp and ceremony with a service at Westminster Abbey, cortege and military procession across London before a final family ceremony at a chapel in Windsor Castle. The Queen made personal additions to the plans, Buckingham Palace has said.

Here's what we know so far about how events will unfold on Monday 19 September.

The Queen's lying-in-state at Westminster Hall in the heart of London will come to an end in the early morning. Thousands have been queuing and filing by to view her coffin.

A little later, at 08:00 BST, the doors of Westminster Abbey will open for guests ahead of her funeral at 11:00.

Heads of state from across the world will be flying in to join members of the Royal Family to remember the Queen's life and service. Senior UK politicians and former prime ministers will also be there.

Members of royal families from across Europe, many of whom were blood relatives of the Queen, are expected - Belgium's King Philippe and Queen Mathilde and Spain's King Felipe and Queen Letizia are among those who have confirmed they will be there.

The ceremonial part of the day will begin in earnest about 15 minutes before the funeral, as the Queen's coffin is carried from Westminster Hall to Westminster Abbey ready for her funeral service. 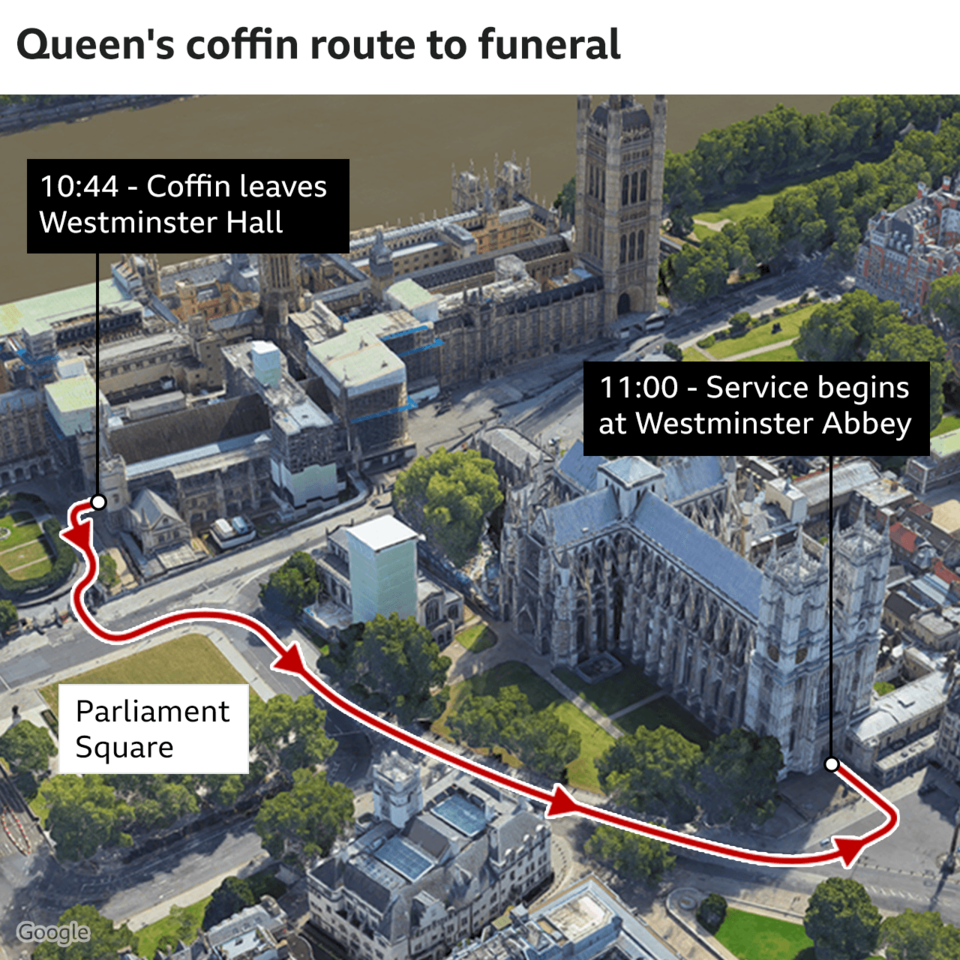 She will be carried on the State Gun Carriage of the Royal Navy, drawn by 142 sailors. The carriage was last seen in 1979 for the funeral of Prince Philip's uncle, Lord Mountbatten and was used for the Queen's father, George VI, in 1952. 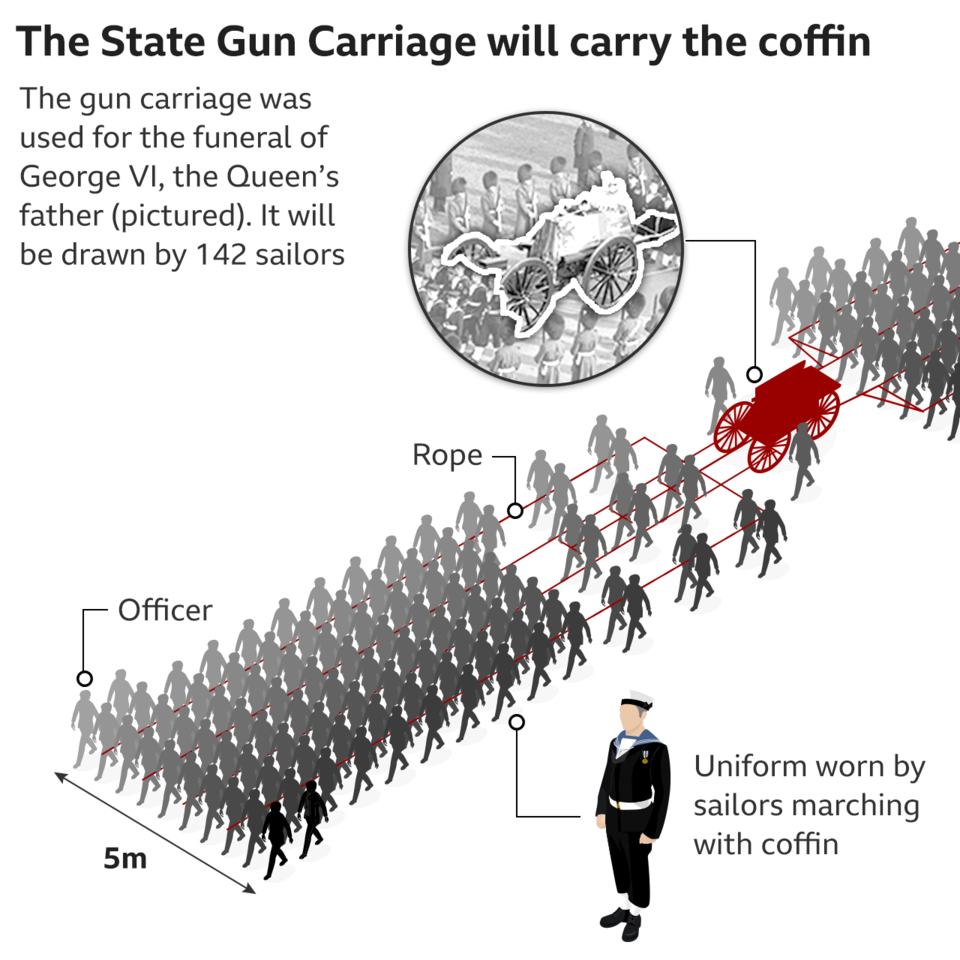 Senior members of the Royal Family, including the new King and his sons Prince William and Prince Harry, will follow the gun carriage in procession.

The procession will be led by the pipes and drums of the Scottish and Irish regiments, members of the Royal Air Force and the Gurkhas.

The route will be lined by the Royal Navy and Royal Marines and a guard of honour will stand in Parliament Square made up of all three military services, accompanied by a Royal Marines band.

The Queen's funeral, expected to be attended by 2,000 guests, will then take place at Westminster Abbey.

It will be a state funeral - an event that is typically held for kings or queens and follows strict rules of protocol, such as a military procession and a period of lying in state - currently under way at Westminster Hall.

The Abbey, hosting the funeral service, is the historic church where Britain's kings and queens are crowned, including the Queen's own coronation in 1953. Not far from where the Queen's coffin is now resting, the Abbey is also the place where she married Prince Philip in 1947. 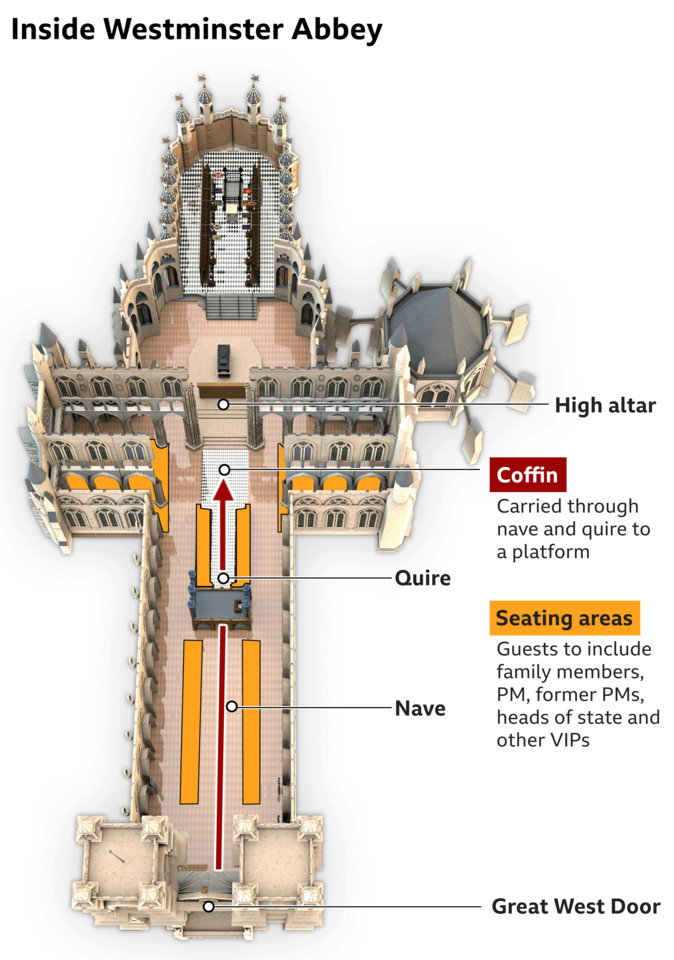 There hasn't been a monarch's funeral service in the Abbey since the 18th Century, although the funeral of the Queen Mother was held there in 2002.

The service will be conducted by the Dean of Westminster David Hoyle, with the Archbishop of Canterbury Justin Welby giving the sermon. Prime Minister Liz Truss will read a lesson.

Towards the end of the funeral, at about 11:55, the Last Post - a short bugle call - will be played followed by a two-minute national silence.

The national anthem and a lament played by the Queen's piper will bring the service to an end at about midday.

Following the funeral service, the Queen's coffin will be drawn in a walking procession from the Abbey to Wellington Arch, at London's Hyde Park Corner.

With the route lined with military personnel and police, Big Ben will toll at one-minute intervals as the procession moves slowly through the streets of the capital. Gun salutes will also fire every minute from Hyde Park. 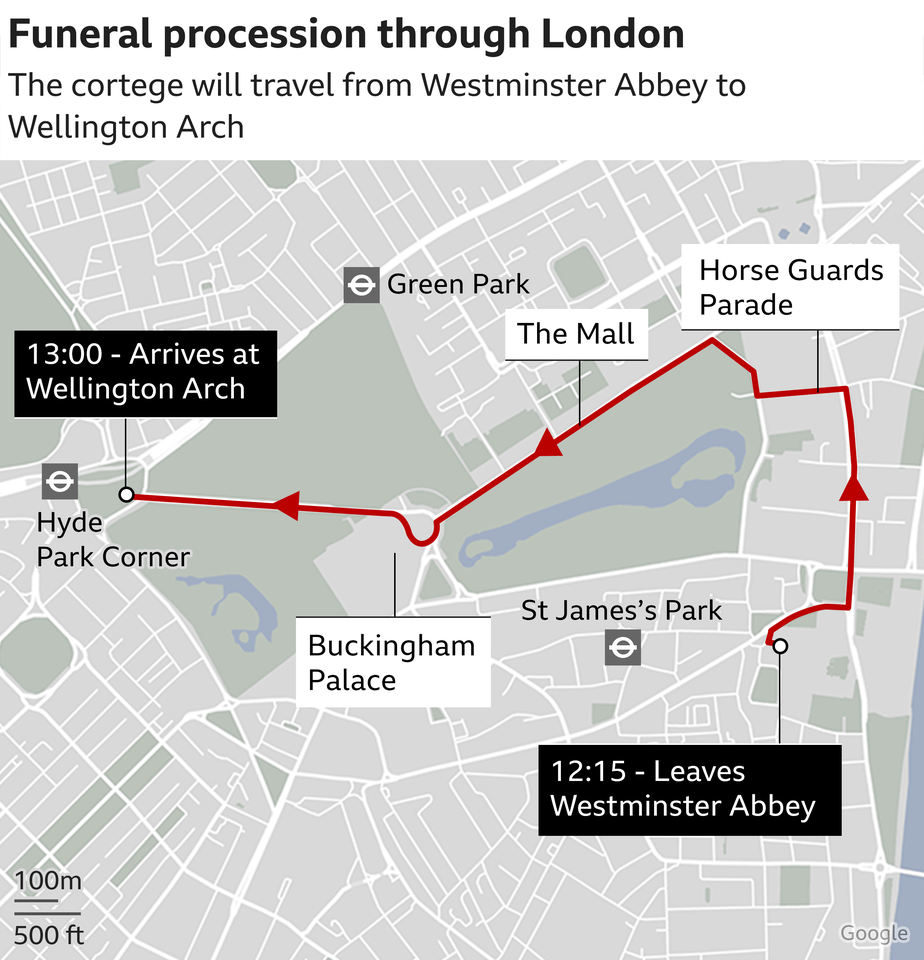 The procession, led by the Royal Canadian Mounted Police, will be made up of seven groups, each with its own band. Members of the armed services from the UK and the Commonwealth, the police and the NHS will also be involved.

Camilla, the Queen Consort, the Princess of Wales, the Countess of Wessex and the Duchess of Sussex will join the procession in cars.

Once at Wellington Arch, at about 13:00, the coffin will be transferred to the new State Hearse for its final journey to Windsor Castle. 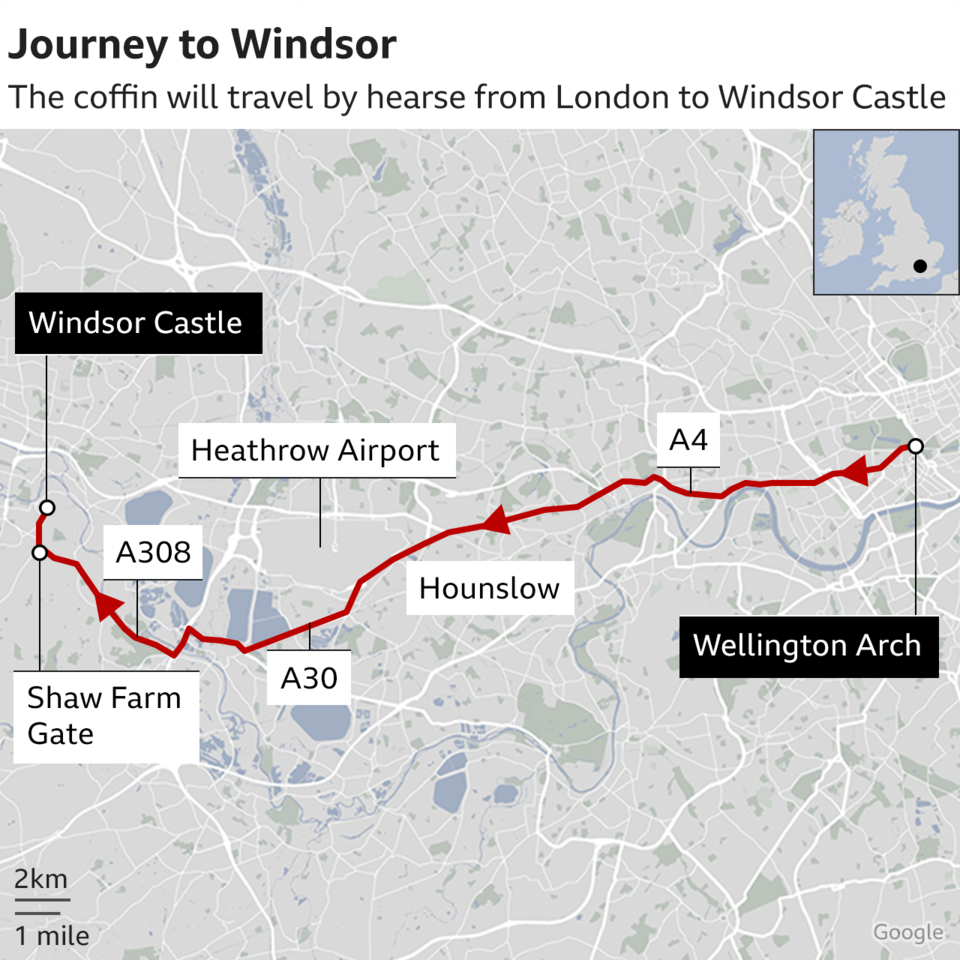 The castle, continuously inhabited by 40 monarchs across almost 1,000 years, had special significance to the Queen throughout her life. As a teenager she was sent to the castle during the war years as London faced the threat of bombing, and more recently she made it her permanent home during the coronavirus pandemic.

Just after 15:00, the hearse is expected to arrive for a walking procession up Windsor Castle's Long Walk. The three-mile (5km) avenue will be lined with members of the armed forces.

The King and senior members of the Royal Family are expected to join the cortege in the Quadrangle in Windsor Castle a little later. 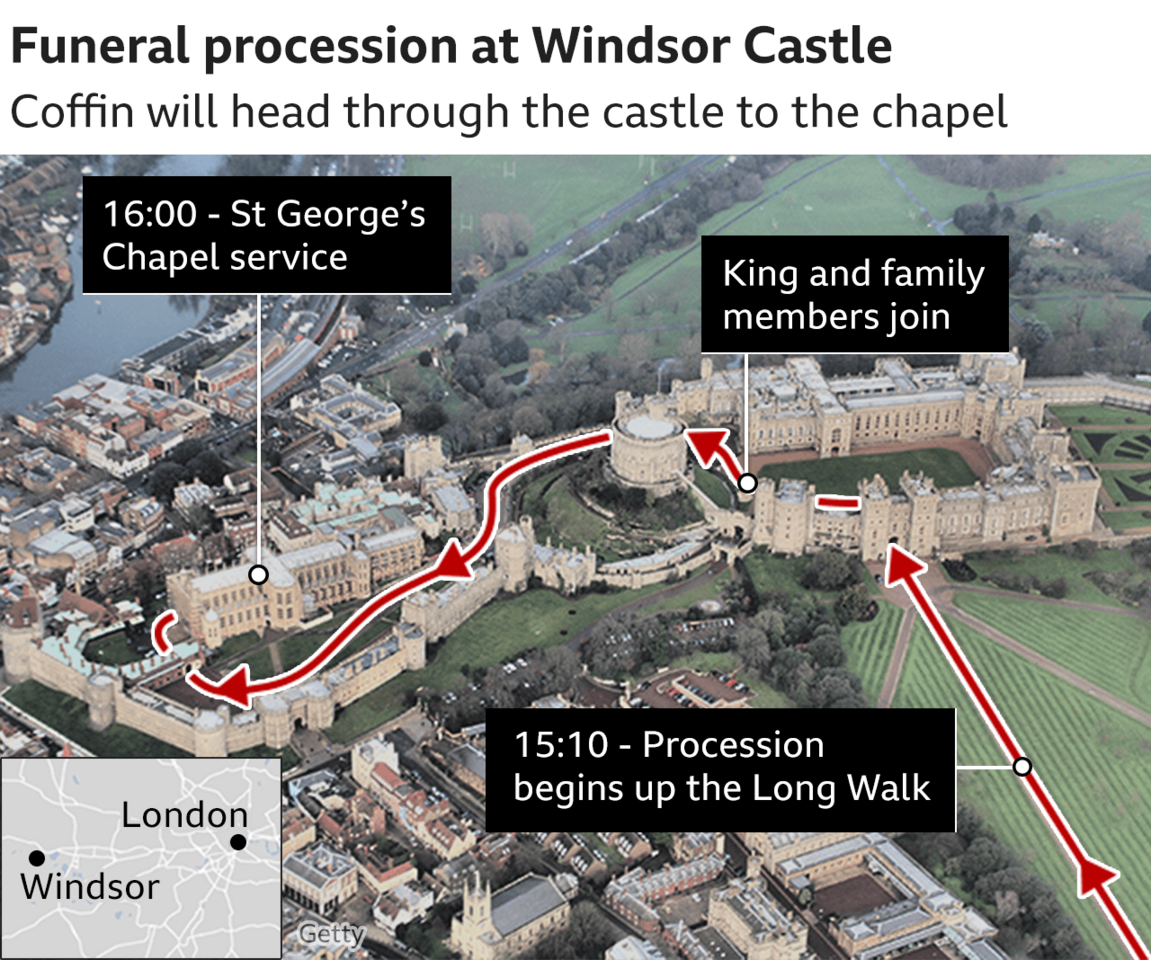 The castle's Sebastopol and Curfew Tower bells will be tolled every minute and gun salutes will be fired from the castle's grounds.

Then the coffin will enter St George's Chapel for a committal service.

St George's Chapel is the church regularly chosen by the Royal Family for weddings, christenings and funerals. It is where the Duke and Duchess of Sussex, Prince Harry and Meghan, got married and where the Queen's late husband Prince Philip's funeral was held. 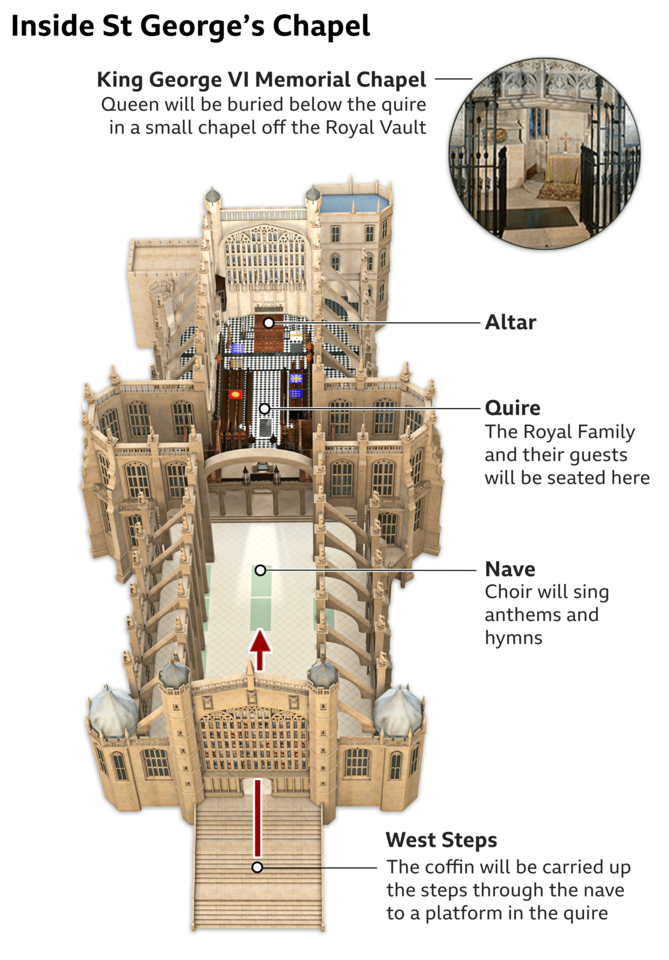 Attended by a smaller, more personal congregation of about 800 guests, the committal service will be conducted by Dean of Windsor David Conner, with a blessing from Archbishop of Canterbury Justin Welby.

The service will include traditions symbolising the end of the Queen's reign.

The Imperial State Crown and the Sovereign's orb and sceptre will be removed from the top of the coffin by the Crown Jeweller, separating the Queen from her crown for the final time.

At the end of the last hymn, the King will then place the Queen's company camp colour, or flag, of the Grenadier Guards on the coffin. The Grenadier Guards are the most senior of the Foot Guards carrying out ceremonial duties for the monarch.

At the same time, the Lord Chamberlain, former MI5 chief Baron Parker, will "break" his wand of office and place it on the coffin. The snapping of the white staff will signal the end of his service to the sovereign as her most senior official in the royal household.

The Queen will then be lowered into the royal vault and the Sovereign's piper will play before a blessing and the singing of God Save the King. The performance by the piper at Windsor was something the Queen had personally requested, Buckingham Palace said.

The committal service will come to an end and the King and members of the Royal Family will leave the chapel.

That evening, at a private family service, the Queen will be buried together with her late husband, the Duke of Edinburgh, at the King George VI memorial chapel, located inside St George's Chapel.