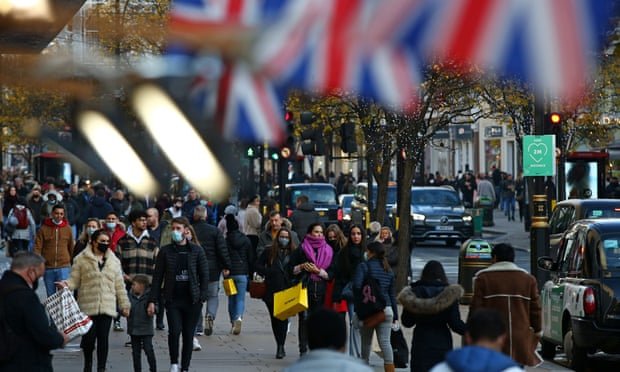 London should be placed under the tightest tier 3 coronavirus restrictions in the next 48 hours, a leading public health expert has warned, as data reveals cases are on the rise across much of the capital.

Figures from Public Health England (PHE) have revealed that between 26 November 2020 and 2 December – the last week of lockdown – 15,200 people tested positive in London, equating to a rate of 170 cases per 100,000 population. That is a rise from 156 cases per 100,000the week before, with PHE noting the seven-day case rate for London increased over five consecutive days.

In some parts of London, which is currently in tier 2, the latest figures show the rate was even higher, reaching 299 per 100,000 population in Barking and Dagenham and 319 in Havering, with a total of 20 of the 32 boroughs exceeding the average figure for England of 149 cases per 100,000. 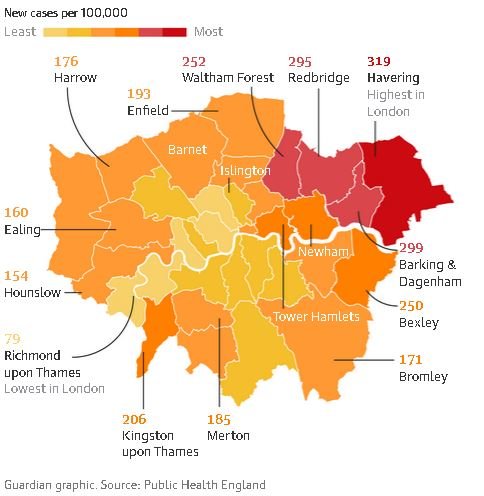 “The latest data shows case rates are on the increase again in most London boroughs, including in the at-risk over 60s,” said Prof Kevin Fenton, the London regional director for Public Health England.

“We’ll need to work together to prevent a big surge in cases in London ahead of the festive period so we must all do our bit and limit the spread over the coming days and weeks.”

But Prof John Ashton, a former regional director of public health for north-west England and author of Blinded by Corona, stressed that urgent action was needed.

“[The government] needs to decide in the next 48 hours whether to move London into tier 3 otherwise they really risk a terrible situation for London, with deaths going up during the Christmas period,” he said, adding: “They might have to go to complete lockdown.”

Experts say the trend in cases chimes with rises in the positivity rate and recent increases hospital admissions in London.

“[That] suggests it is not just a question of testing more,” said Christina Pagel, professor of operational research at University College London and a member of the Independent Sage group of experts.

“I think it would be quite wrong to imagine that we can relax at Christmas without doing anything extra between now and then,” he told the Guardian.

A review of coronavirus restrictions across the country is due to be carried out on 16 December.

“I wouldn’t be surprised if [London] went into tier 3 next week,” said Pagel. But, she added, the limited impact of the most recent lockdown on infection rates and hospital admissions in London suggests that might have little success in actually reducing cases.

Prof Gabriel Scally, visiting professor of public health at the University of Bristol and a member of Independent Sage, agreed restrictions could be tightened.

“I think it is certainly on the cards [that London goes into tier 3],” he said. “Some of the increases in the one week are very substantial.”

But Scally added that with Christmas rapidly approaching, and the government committed to relaxing restrictions for the festivities, the situation could get worse with expectations of a high movement of people, as well as international arrivals, multigenerational mixing and indoor gatherings – all of which can increase transmission.

“I wouldn’t be at all surprised if the next week or two leaves the government with a really difficult conundrum just days before Christmas,” he said.

Ashton agreed, but said the 16 December is too late to take action in London. “It would be exactly what [the government] has done throughout this [pandemic], which is to make these decisions one or two weeks too late,” he said. “If they want people to feel that they have got some semblance of Christmas, then they are going to have to be decisive for once.”