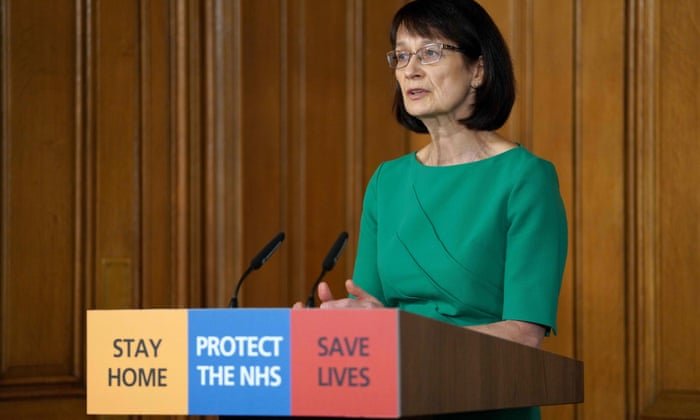 As the UK’s death toll from the virus rose to 1,228 over the weekend, two surgeons were confirmed to have died in what the NHS medical director described as “a stark reminder to the whole country that we all must take this crisis seriously”.

Amged El-Hawrani, a 55-year-old ear, nose and throat consultant, died on Saturday at Leicester Royal Infirmary, while Adil El Tayar, 63, an organ transplant specialist, died on Wednesday at West Middlesex University Hospital in London, it emerged. Both had contracted Covid-19.

As they mourned the death of their colleagues, doctors’ and nurses’ groups attacked continuing shortages of protective equipment – from masks to gowns – and complained that there was still confusion despite fresh official guidance about their proper use. There were further calls to ramp up testing of NHS workers.

Jenny Harries, deputy chief medical officer, said fatalities were expected to increase. With Britain beginning its second full week under effective lockdown, she indicated that normal life was not likely to resume for three to six months – and “it is plausible it could go further than that”, she cautioned.

On Monday, the public was asked to stop all non-essential travel, work from home if possible, and limit exercise to once a day, with a ban of gatherings of more than two people. All pubs, restaurants, cafes, cinemas and gyms have been told to close.

Harries said: “Over time – probably over the next six months – we will have a three-week review, we will see where we’re going. We need to keep that lid on and then gradually we will be able to hopefully adjust some of the social distancing measures and gradually get us all back to normal.

“So I think three weeks for review. Two or three months to see whether we’ve really squashed it, with about three to six months ideally, and lots of uncertainty in that, but then to see at which point we can actually get back to normal. It is plausible that it could go further than that.”

Harries described El-Hawrani’s death as “a worrying event”, adding: “It is in no one’s interests that we lose our colleagues.” Stephen Powis, NHS national medical director, said his death was “not just an individual human tragedy, but a stark reminder to the whole country that we all must take this crisis seriously”. Pradeep Kumar, a surgeon, said he was angry at the loss of his friend. “Did it have to be this way?” he said. “Such a waste of precious life.”

Tayar had spent his final days volunteering to stem the outbreak in an A&E department in the Midlands. “He wanted to be deployed where he would be most useful in the crisis,” his cousin, British-Sudanese journalist Zeinab Badawi, said.

Boris Johnson, who continues to suffer “mild symptoms” of Covid-19, released a video on Sunday night announcing that 20,000 former NHS workers had returned to the frontline, up from 7,500 on Monday.

At least 2,660 doctors have heeded the call to return from retirement to fight the pandemic, but hundreds have warned that they will not do so or increase their hours unless they are guaranteed proper compensation if they die, the Guardian has learned.

The families of doctors who leave the NHS pension scheme are not normally paid death-in-service compensation, which is worth over two years’ salary. The department of health and social care said it was “considering proposals to offer further support for those returning to the frontline”.

With supplies of personal protective equipment (PPE) becoming the key concern for frontline health workers, Robert Jenrick, the communities secretary, insisted that he understood the urgent need for protection.

At the the daily government press conference, he said over 200m items of protective kit had been delivered so far, including 170m masks, 42.8m gloves, 13.7m aprons, 2.3m pairs of eye protectors and 182,000 gowns to 58,000 “healthcare settings”, including hospitals and GP surgeries.

Addressing “all those who rely on this equipment, and their families and loved ones”, Jenrick said: “We will not stop until we have got you the equipment you need.”

NHS England and Public Health England (PHE) have acknowledged there had been distribution and supply problems. In a letter sent on Saturday to hospitals, GPs and commissioning bodies, their leaders said they were “now confident that all logistical issues are being solved and that every part of the NHS that needs PPE will be supplied in good time with adequate stock”.

But Chaand Nagpaul, chair of the British Medical Association council, said: “The reality is that [PPE is] still not reaching hundreds, if not thousands, of frontline staff on the ground – with current reports from around the country from doctors that supplies are running out, being rationed or of inadequate protection.

“We already have many doctors telling us that they’re extremely concerned that they feel the level of PPE that they currently have is not adequate to protect themselves and their colleagues against Covid-19 … Doctors here will understandably be concerned when they see images in the media of their colleagues around the world treating patients in full overalls and full face protection, and asking why the same is not recommended or available here.”

Guidance issued over the weekend by NHS England and PHE about how the equipment should be used also diverges from World Health Organization (WHO) guidelines, doctors said. It instructs frontline workers to use goggles in procedures most likely to generate virus-carrying aerosols, such as inserting a breathing tube.

It states that aprons rather than disposable full-sleeve gowns can be worn in other cases. The British Medical Association said this differs from WHO guidance on gowns and goggles for all healthcare workers dealing with suspected or confirmed coronavirus cases.

Nurses said the latest official guidance about personal protection “lacks any credibility”. “Every minute we wait for new guidance is a minute too long,” said Dame Donna Kinnair, Royal College of Nursing general secretary. “The confusion must stop. We need action.”

NHS England said it was reviewing the guidance and would issue new instructions on what equipment to wear in what circumstances in the coming days.

Dr Claudia Paoloni, president of HCSA, the hospital doctors’ union, said there was no “luxury of days”. “Royal Colleges have been taking matters into their own hands with reinterpretations of the guidance, which is causing confusion and contradiction on the ground,” she said. “Some trusts have broken ranks and rightly introduced more stringent measures. The rate at which the disease is progressing means the government and PHE need to get on top of this, and quickly.”

Two hundred and nine fatalities from coronavirus were announced in the UK on Sunday. The increase was smaller than feared, but health experts cautioned against seeing any glimmer of hope.

The Department for Health and Social Care announced that 19,522 people had tested positive for the disease in the UK, following another 6,961 tests in the last day. That testing rate is short of the 10,000 tests the government has promised and well short of the 25,000 tests a day that Boris Johnson promised.

The former prime minister Tony Blair joined the former health secretary, Jeremy Hunt, in calling for ramping up testing for the virus. Speaking on Sky News, Blair said: “It is all about getting to mass testing as fast as possible, because we have to know who has the disease and who has had the disease in order to get the lockdown eased and get people back to work.”
Add Comment