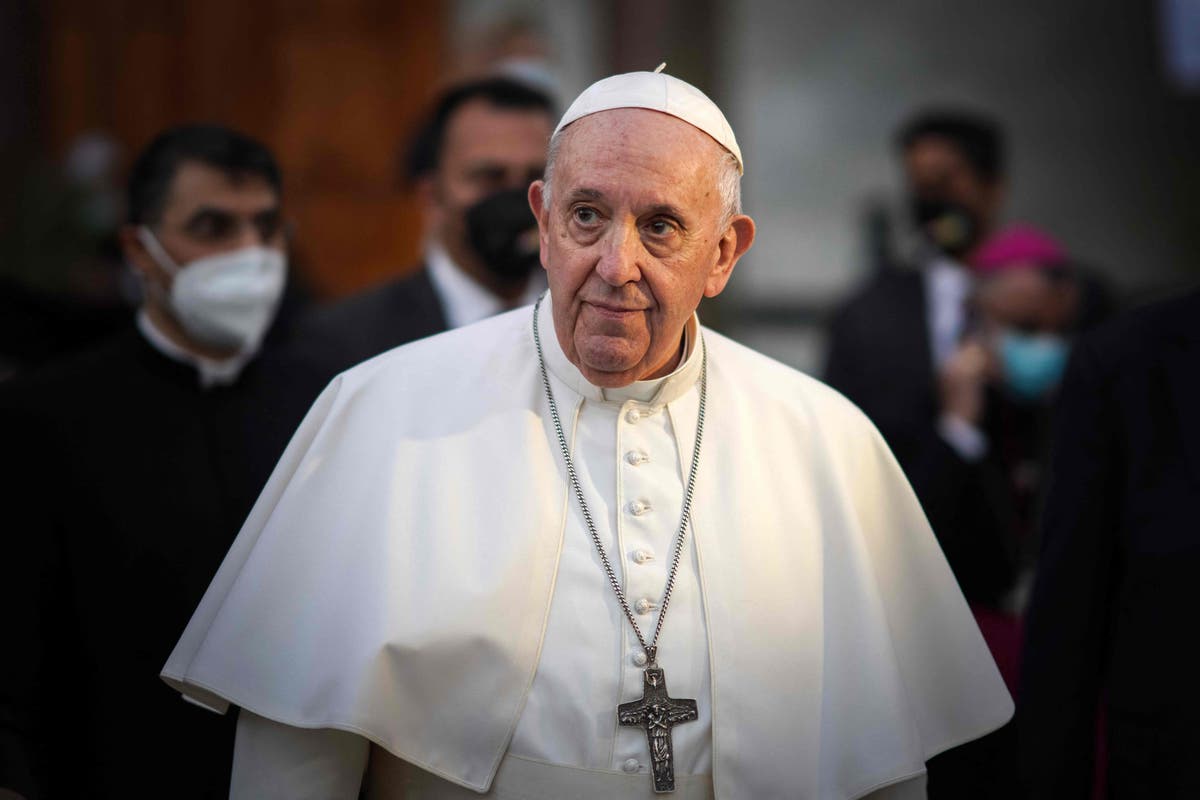 Pope Francis opened the first-ever papal visit to Iraq with a plea for the country to protect its centuries-old diversity.

Francis urged Muslims to embrace their Christian neighbours as a precious resource and asked the embattled Christian community - "though small like a mustard seed" - to persevere.

He brushed aside the coronavirus pandemic and security concerns to resume his globe-trotting papacy after a year-long hiatus spent under Covid-19 lockdown in Vatican City.

His primary aim over the weekend is to encourage Iraq's dwindling Christian population, which was violently persecuted by the Islamic State group and still faces discrimination by the Muslim majority, to stay and help rebuild the country devastated by wars and strife.

"Only if we learn to look beyond our differences and see each other as members of the same human family," Francis told Iraqi authorities in his welcoming address, "will we be able to begin an effective process of rebuilding and leave to future generations a better, more just and more humane world."

A Vatican spokesperson said the trip was “an act of love to a country that has suffered terribly over recent decades”.

The 84-year-old pope donned a facemask during the flight from Rome and throughout all his protocol visits, as did his hosts. 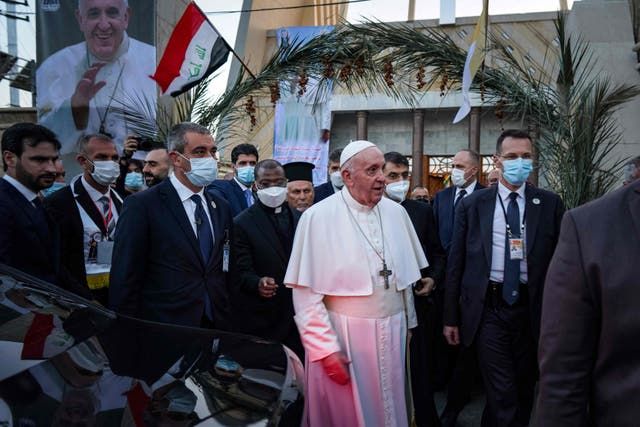 Security surround Pope Francis as he leaves the cathedral

But the masks came off when the leaders sat down to talk, and social distancing and other health measures appeared lax at the airport and on the streets of Baghdad, despite the country's worsening Covid-19 outbreak.

The government is eager to show off the relative stability it has achieved after the defeat of the IS "caliphate." Nonetheless, security measures were tight.

Francis, who relishes plunging into crowds and likes to travel in an open-sided popemobile, was transported around Baghdad in an armored black BMWi750, flanked by rows of motorcycle police.

It was believed to be the first time Francis had used a bulletproof car - both to protect him and keep crowds from forming. 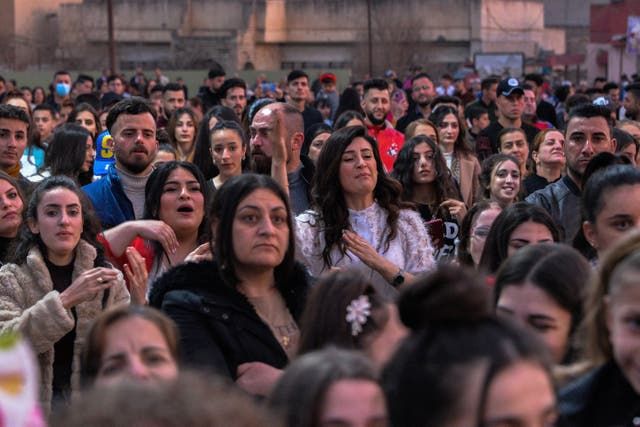 However Iraqis seemed keen to welcome Francis and the global attention his visit brought. Some lined the road to cheer his motorcade. Banners and posters in central Baghdad depicted Francis with the slogan "We are all Brothers."

Francis told reporters aboard the papal plane that he was happy to be resuming his travels again and said it was particularly symbolic that his first trip was to Iraq, the traditional birthplace of Abraham, revered by Muslims, Christians and Jews.

"This is an emblematic journey," he said. "It is also a duty to a land tormented by many years."

Francis was visibly limping throughout the afternoon in a sign his sciatica nerve pain, which has flared and forced him to cancel events recently, was possibly bothering him. He nearly tripped as he climbed up the steps to the cathedral and an aide had to steady him. 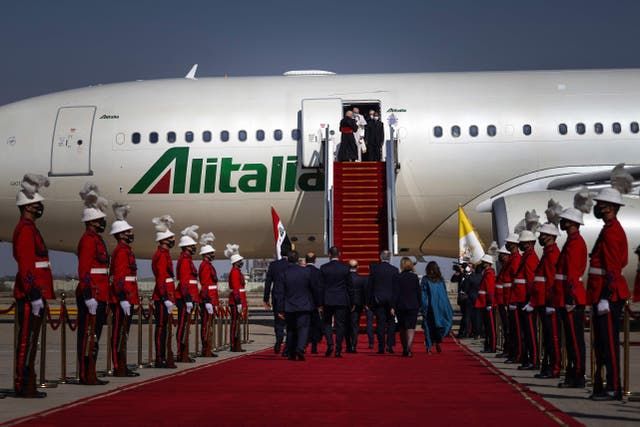 Pope Francis leaves the Alitalia aircraft that transported him to Iraq, at Baghdad Airport.

At a pomp-filled gathering with President Barham Salih at a palace inside Baghdad's heavily fortified Green Zone, Francis said Christians and other minorities in Iraq deserve the same rights and protections as the Shiite Muslim majority.

"The religious, cultural and ethnic diversity that has been a hallmark of Iraqi society for millennia is a precious resource on which to draw, not an obstacle to eliminate," he said. "Iraq today is called to show everyone, especially in the Middle East, that diversity, instead of giving rise to conflict, should lead to harmonious cooperation in the life of society."