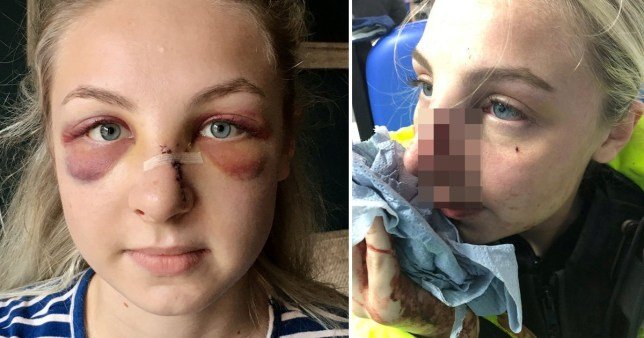 Policewoman needed 17 stitches after boy, 16, punched her as she handcuffed him

A police officer was left unable to breathe properly and needing facial surgery after she was punched in the face while trying to detain a boy, 16.

Graphic images of the officer, in her 20s, show her with a deep gash across her nose and dark bruises around both her eyes. She was rushed to Queens Hospital Burton after the incident on September 12, and treated for a broken nose, broken septum and tears to her nostril.

She then underwent surgery, and had to have six internal stitches and 11 external stitches to her nose. Three months on, she is waiting for another operation and is unable to breathe through her left nostril.

The unnamed officer, who works for Leicestershire Police, said: ‘It does make me angry that I was out doing my job and I have been attacked in this way.

‘It shouldn’t be accepted that I am attacked in my job and left with injuries like this that will be with me for the rest of my life.’

The officer had been assisting with a search of the boy after he was detained by her colleagues on Burton Road, in Ashby, due to concerns over his behaviour. 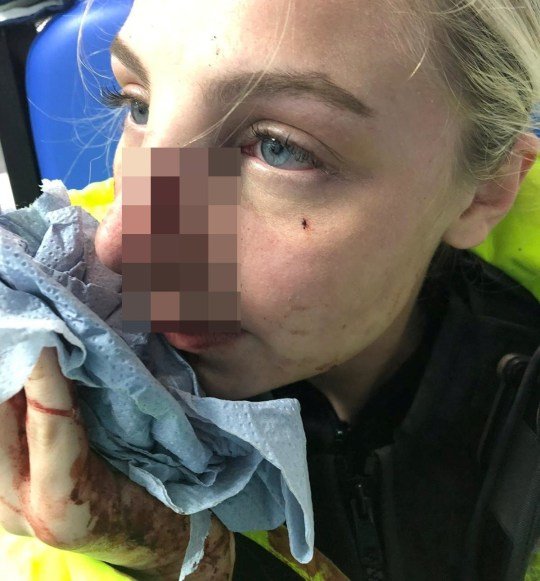 The incident left her covered in blood

She was worried the teen would flee the scene and told him she was going to place him in handcuffs. As she then placed on of the cuffs on his wrist, he used his free hand to punch her in the face.

The officer said: ‘It happened so quickly and I didn’t know what had hit me. I just felt extreme pain and realised I couldn’t see properly either.’

Since then, she has had to recover from her injuries while working from home, and hopes to eventually return to her role.

The boy, of Swadlincote, Derbyshire, who cannot be named for legal reasons, appeared at Leicester Magistrates’ Court on Monday and pleaded guilty to wounding the police constable. He is due to be sentenced on January 11 next year. 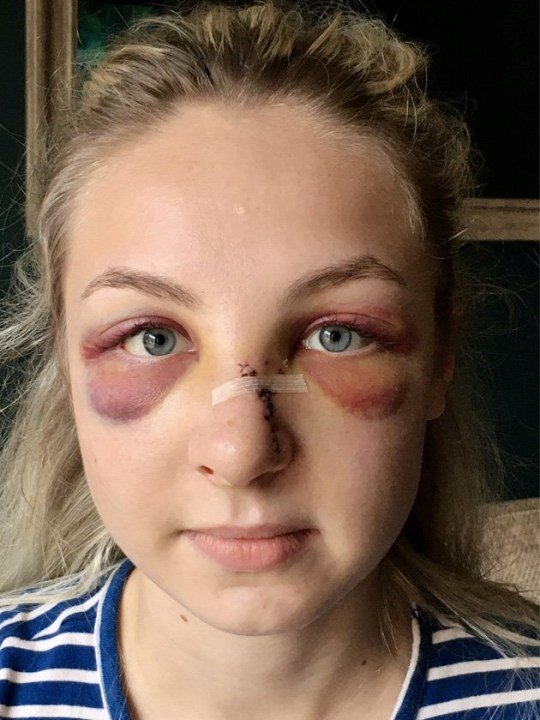 She is still unable to breathe out of one nostril

NPA Commander for North West Leicestershire, Inspector Rich Jackson said: ‘This was a horrific assault carried out on an officer who was simply doing her job. The attack was carried out by a person who was bigger, taller and stronger meaning that one punch caused horrendous long-term injuries.

‘Full support has been and remains in place for the officer concerned who has bravely shared her story to raise awareness of an issue which needs to be stopped.

‘It is not acceptable for anyone to be attacked and assaulted in their job and we will not tolerate this happening to our officers. Action will be taken and we will ensure anyone who commits this offence is brought before the courts.’