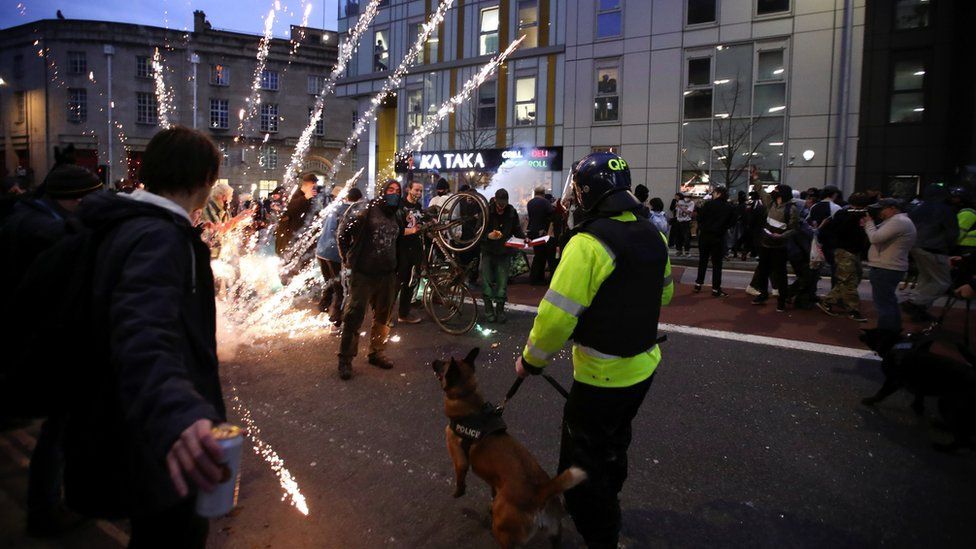 Police officers injured in 'kill the bill' clashes in Bristol

A demonstration in Bristol against plans to give police increased powers to shut down peaceful protests has become violent, with riot police and horses deployed, officers injured and vehicles torched after a week of protests against the controversial legislation.

Hundreds gathered at Bristol’s College Green before marching to a police station on nearby Nelson Street. Many were wearing masks and carried placards saying “Say no to UK police state” and “Freedom to protest is fundamental to democracy” and “Kill the bill”.

What began as a sit-down protest outside the station escalated as the evening progressed, Bristol Live reported, as riot police, dogs and police horses were deployed and police station windows were smashed.

Footage shared on social media showed demonstrators surrounded by riot officers and mounted police while chanting “10 years for protests, five years for rape” outside the station. 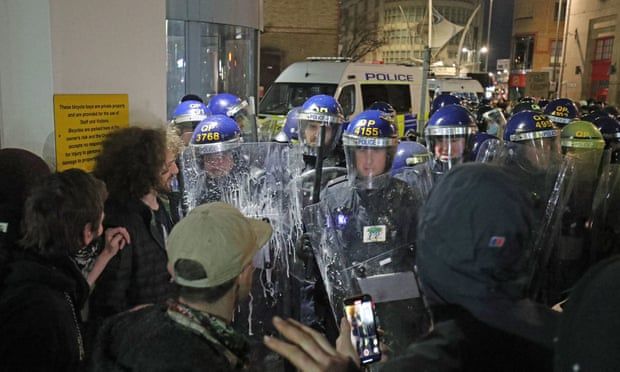 Avon and Somerset police some of their vehicles were set alight, including a van parked near the station. Protesters also attempted to set fire to other marked police vans parked outside the station but officers managed to extinguish the flames.

The tensions continued into late into the evening, with videos showing protesters using street furniture against riot officers holding shields while others used police dogs to clear people from the streets.

Ch Supt Will White of Avon and Somerset police said: “What started out as a peaceful protest has been turned by a small minority into violent disorder. These scenes are absolutely disgraceful and they will be widely condemned by people across the city. There can never be any excuse for wanton disorder. Officers have been subjected to considerable levels of abuse and violence. One officer suffered a broken arm and another suffered broken ribs. Both have been taken to hospital.”

He added: “These are men and women out there with the intention of serving and protecting the public – they should never be subjected to assaults or abuse in this way … All those involved in his criminal behaviour will be identified and brought to justice. There will be significant consequences for behaviour such as this.” 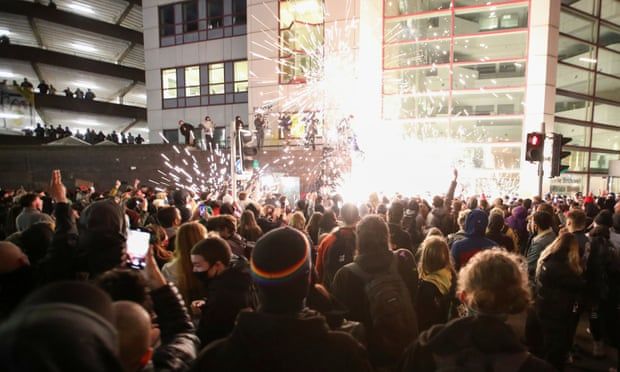 The Bristol mayor, Marvin Rees, criticised the violence as counter-productive, saying that rather than stopping government plans to increase police powers, the “lawlessness on show” will be “used as evidence and promote the need for the bill”.

Rees said: “The violence and damage that have emerged from today’s protests are unacceptable and have nothing to do with the real work we are doing to tackle political, economic and social inequality.

“I recognise the frustrations with the police, crime, sentencing and courts bill. I have major concerns about the bill myself, which is poorly thought-out and could impose disproportionate controls on free expression and the right to peaceful protest.”

The mayor said that Sunday’s actions “do nothing to bring us closer to justice”, underlining that he was “speaking as someone who himself … would be disproportionately likely to receive injustice”.

Both the home secretary and shadow home secretary condemned the scenes, with Priti Patel writing on Twitter: “Thuggery and disorder by a minority will never be tolerated. Our police officers put themselves in harms way to protect us all.” She said her thoughts were with the officers who had been injured. 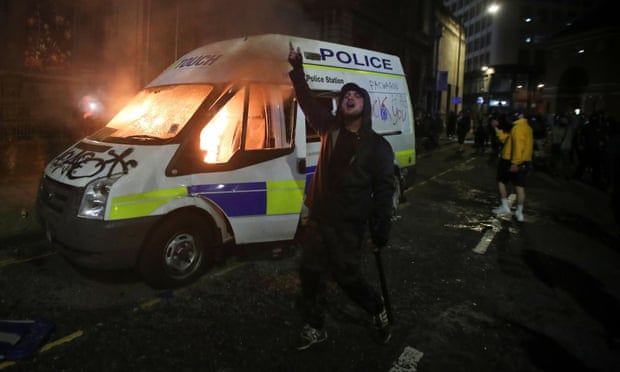 A demonstrator gestures in front of a burning police vehicle during the protest.

Nick Thomas-Symonds described the scenes as “awful” and “shocking”, tweeting: “There is no excuse whatsoever for this violence. Thinking of those officers who have been injured, and their families, and wishing them a swift recovery.”

Darren Jones, Labour MP for Bristol North West, said: “You don’t campaign for the right to peaceful protest by setting police vans on fire or graffitiing buildings. Avon and Somerset police were on duty today to facilitate a peaceful protest not to deal with criminal behaviour.”

The scenes followed a week of demonstrations in response to the Metropolitan police’s crackdown on a vigil for Sarah Everard, who was allegedly murdered by a serving police officer, and as the police, crime, sentencing and courts bill progressed through parliament.

The bill would give the police in England and Wales more power to impose conditions on non-violent protests, including those deemed too noisy or a nuisance, with protesters potentially facing fines or prison sentences. 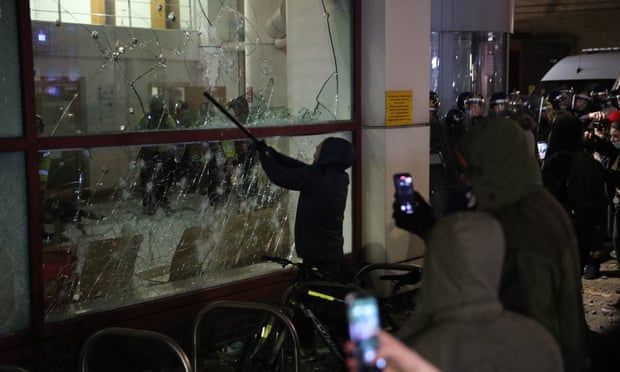 The planned legislation would establish a new law to protect monuments and statues, following the toppling of the statue of Edward Colston in the city last summer, damage punishable by up to 10 years in jail.

Avon and Somerset police had warned before the protest that enforcement action could be taken against people attending the demonstration, with coronavirus lockdown rules meaning protesters could be fined £200.

“Officers are engaging with a number of people who’ve turned up at the protest,” a police spokeswoman said. “Officers are continuing to engage with those attending. Enforcement action will be taken retrospectively when necessary and proportionate.”