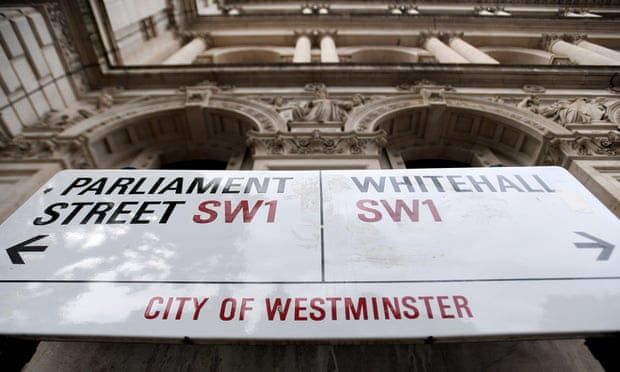 Plans to sell £1.5bn of UK government buildings based on ‘fantasy’

Jacob Rees-Mogg accused of pursuing agenda of ‘punishing civil servants who work from home’
Plans to sell off £1.5bn worth of government-owned buildings are based on “fantasy” job cuts to the civil service and ignore the role of hybrid working, critics have said.

They took aim at Jacob Rees-Mogg’s crackdown on what he called “under-utilised” property, under which the number of offices operating at the heart of Westminster would more than halved.

The Brexit opportunities minister said the move would deliver “more efficient, more effective and smaller government” and save taxpayers’ money, given the “challenging fiscal context”.

While the number of government offices in central London has already been cut significantly since 2018, from 63 to 36, a strategy published on Wednesday said ministers would “consolidate further with only 16 buildings to remain in and around Whitehall” by 2025 – fewer than the 23 government departments.

About £1.5bn will be recouped, the Cabinet Office estimated. The figure is less than 1% of the £157bn estimated value of the government estate, which includes prisons, courts, schools and museums, as well as hospitals and health surgeries, job centres and military bases across the UK.

A further £500m is hoped to be saved by cutting operating costs and spending on leases, as well as changing building materials and energy sources.

Fewer officials will need office space in London given the target to move 22,000 roles and 50% of senior civil service roles out of Greater London by 2030, the Cabinet Office said.

Government buildings will also have to follow revised guidance for public toilets, which is being changed to discourage “gender neutral” ones and instead keep facilities separate for men and women.

Mike Clancy, the general secretary of the civil service union Prospect, said a well-informed plan to improve efficiency of government-owned buildings and slash emissions would have been welcome, but added: “This is not it.”

He pointed to the promised near-20% cut to civil service jobs. The government has yet to announce which of its 91,000 roles are likely to go, and faces the threat of legal action over attempts to limit the size of redundancy payouts.

The is a “real danger that in closing smaller properties embedded in communities, in the name of efficiency, you make it much harder for people to access face-to-face services”, he said, adding that the strategy was “shortsighted” and ideological.

The Cabinet Office said it was unable to reveal the list of buildings it planned to sell to raise £1.5bn because of commercial reasons. When the final sites are identified, staff working in them will be informed first about where they are to be relocated.

Rees-Mogg has piled pressure on civil servants to reduce remote working and work more in offices, doing spot checks of some departments and even leaving notes on several empty desks.

However, the document released on Wednesday made no mention of retaining flexible working. This is in contrast with the Government Property Agency’s strategy for the 2020s, which found: “In most cases desk-based work can be done effectively at home.”

Jordan Urban, a researcher for the Institute for Government, a thinktank, said: “Given the rise of hybrid work and its potential impact on the requirements of the government estate, it is strange that it is not mentioned once in the strategy.”

He added that while seeking a more efficient estate was sensible, “a smaller one may run contrary to the government’s intention for civil servants to return to the office more often, given that in some departments there are already notable constraints on the amount of space available for in-person work”.

Mark Serwotka, the general secretary of the Public and Commercial Services Union, also said Rees-Mogg was pursuing an agenda of “punishing” civil servants who worked from home, adding: “We’ll insist any office closures result not in job losses but in flexible working instead.”
Add Comment