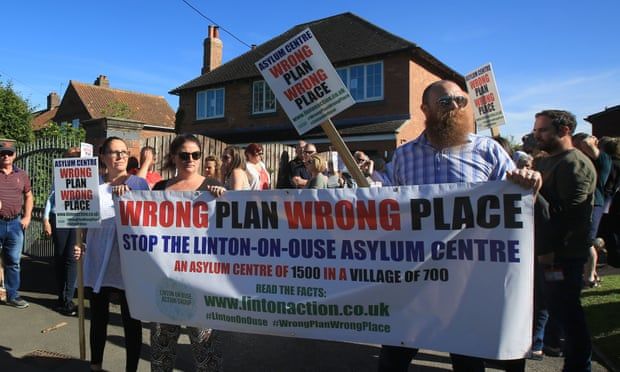 Locals accuse Home Office of being ‘shambolic’ after no decision reached about setting up ‘Guantánamo-on-Ouse’ at ex-RAF base
A Home Office plan to move dozens of asylum seekers into a former RAF base in North Yorkshire by Tuesday has been delayed after a document emerged admitting that “no final decision” has yet been taken.

The plan to move 1,500 asylum seekers into the disused military base in the village of Linton-on-Ouse has been met with strong opposition. The 600 residents of the village, dubbed “Guantánamo-on-Ouse”, have spoken out against the scheme – along with local councils and campaigners.

The local Conservative MP, Kevin Hollinrake, said earlier this month that the Home Office had informed him the first group of 60 asylum seekers would move into the RAF base by 31 May.

However, a letter dated 27 May to Justin Ives, the Hambleton district council chief executive, from a senior Home Office official stated that “no final decision has been taken by ministers to accommodate asylum seekers at RAF Linton”.

The letter adds: “Analysis and consideration of whether or not to accommodate asylum seekers at RAF Linton is ongoing. As a result I am not in a position to share with you any further finalised evidence, impact assessments or timelines.”

It raises questions about why the announcement was made about moving the first group of asylum seekers in.

The RAF base – where Prince William, the Duke of Cambridge, trained – is the first of a network of proposed asylum camps to help end hotel use for this group at a reported cost of £4.7m a day.

Dr Olga Matthias, of Linton-on-Ouse Action group, said: “We just can’t believe the mixed messages coming out of the Home Office. On 14 April they announced that they’re doing this to us, come what may – then a few days ago they said they haven’t even decided to do it at all – and then with seven hours to go, they said they weren’t able to meet their own deadline. It’s utterly shambolic.”

A Home Office spokesperson said: “As we continue to work on the plan for the asylum reception centre at Linton-on-Ouse, which will be as self-sufficient as possible, we continue to listen to community feedback. We maintain the site is urgently needed to provide essential asylum accommodation and will assist as we end the use of asylum seekers using hotels which are costing the taxpayer almost £5m a day.”
#Prince William
Add Comment