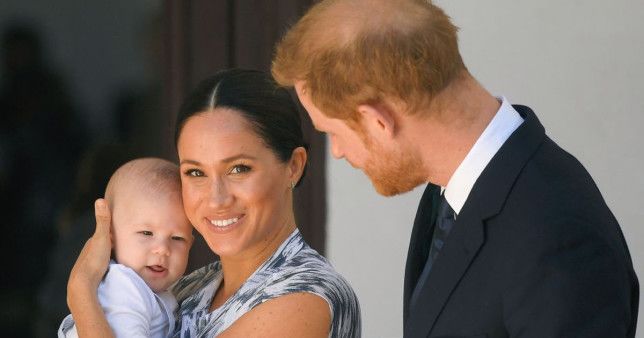 Buckingham Palace is reportedly afraid that the royal who allegedly made a racist comment about baby Archie’s skin colour could be named and shamed by Prince Harry and Meghan Markle.

This week the couple claimed that an unnamed member of the Royal Family asked ‘how dark’ their unborn child’s skin would be, but declined to name the person involved. That sparked widespread speculation about their identity.

It has since been clarified that both the Queen and Prince Philip did not make the alleged comment.

But according to reports, there is now a ‘lack of trust’ between the two camps and the Palace fears that the individual involved could be outed if the allegation is rebuked.

A senior source told the London Evening Standard: ‘A denial could lead to the Sussexes breaking their vow and naming the member of the Royal Family who discussed their son’s skin colour.

‘There is a lack of trust.’

It follows the Duke and Duchess of Sussex’s bombshell interview with Oprah Winfrey, which made a host of accusations about the Royal Family, including that they offered no support to a suicidal Meghan.

Meanwhile, Prince Charles and Camilla, the Duchess of Cornwall, visited a number of vaccination centres as part of their official duties on Tuesday, with the Prince of Wales said to be ‘deeply concerned’ by the allegations.

Harry said his father had stopped taking his calls for a period of time.

Elsewhere, Prince William and Kate were seen driving around London on personal errands.

Amid mounting media coverage in the wake of the tell-all interview, Buckingham Palace issued a rare statement in response to the couple’s revelations on Tuesday evening.

The Queen’s statement said: ‘The whole family is saddened to learn the full extent of how challenging the last few years have been for Harry and Meghan.

‘The issues raised, particularly that of race, are concerning.

‘While some recollections may vary, they are taken very seriously and will be addressed by the family privately.’

Meanwhile, Piers Morgan has quit Good Morning Britain after his comments about Meghan sparked widespread outrage and more than 41,000 complaints to Ofcom.