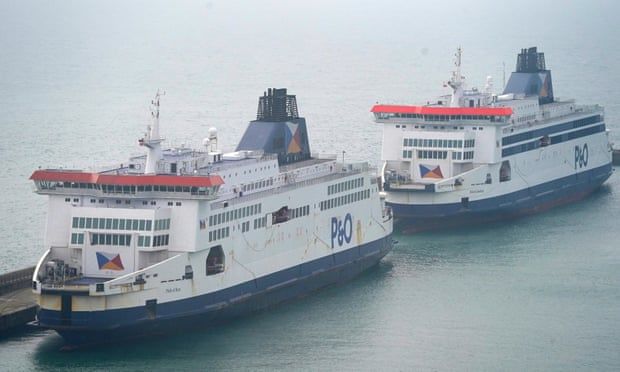 Ferry firm’s boss says complying with minister’s request would cause company’s collapse
P&O Ferries has rejected the UK government’s call to move this week’s deadline for the 800 sacked workers to accept redundancy offers, saying most had already signed contracts and ministers were “ignoring the situation’s fundamental and factual realities”.

In a bullish response to the transport secretary, Grant Shapps, the ferry operator’s chief executive, Peter Hebblethwaite, said the demand was legally impossible and would close the firm down.

He wrote to Shapps: “Complying with your request would deliberately cause the company’s collapse, resulting in the irretrievable loss of an additional 2,200 jobs. I cannot imagine that you would wish to compel an employer to bring about its downfall, affecting not hundreds but thousands of families.”

Hebblethwaite said that more than 765 of the 786 crew members summarily sacked on 17 March had “taken steps to accept the settlement offer”, and more than 500 had signed legally binding agreements. That included 67 officers who were planning to continue to work on P&O’s vessels with the new agency crew.

Shapps had written to P&O Ferries on Monday offering “one last opportunity” to reverse its extraordinary and illegal sacking of the UK-based crew, working on Jersey contracts, before bringing in a planned package of legal measures to force its hand.

The transport secretary is expected to unveil an eight-point plan to parliament on Wednesday that will include tightening employment laws for ship operators in UK waters, and tackling minimum pay.

Hebblethwaite wrote that the firm welcomed proposals to increase the minimum wage for all seafarers in UK waters, adding: “From the outset, P&O Ferries has called for a level playing field regarding salaries on British ferry routes.”

What unions have called a “race to the bottom” among operators was accelerated last year after the government refused to step in when Irish Ferries started operating the Dover-Calais crossing in summer 2021, using a similar model of low-paid agency staff.

Hebblethwaite told Shapps that regardless of the minimum wage, P&O Ferries would need to adopt a different crewing model, and not pay staff for their rest periods as agreed with unions.

The chief executive, who shocked MPs at a Commons hearing last week by admitting his firm deliberately broke the law by dismissing the workers without consultation, said: “I have endeavoured to present the facts in this letter and before the select committees with absolute candour and transparency.”

He added: “We have made this difficult decision in the knowledge that it would be highly unpopular and, for some, difficult to reconcile … I am fully cognisant of the reputational cost to the P&O Ferries brand and me personally.”

Sailings remain suspended on passenger routes. On Monday night, a second P&O ferry, the Pride of Kent, was detained by the Maritime and Coastguard Agency after failing a safety inspection.

Another ferry, the European Causeway, was detained in Larne, near Belfast, last Friday after failing an inspection due to issues including crew familiarisation and training.
Add Comment