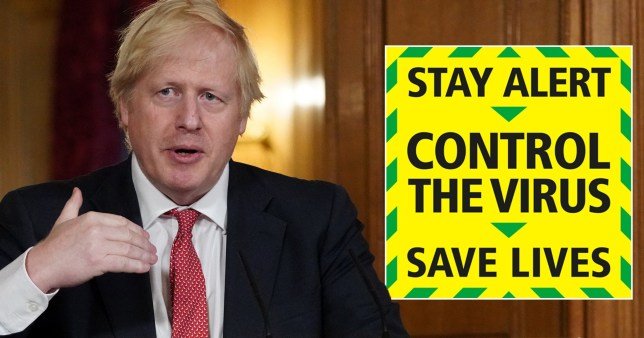 Johnson accused of becoming ‘PM for England’ as MPs say lockdown advice may cost lives
Opposition leaders have rounded on Boris Johnson for sending out confusing and muddled advice that they claimed could cost lives as the government attempts to move away from the coronavirus lockdown.

MPs in the Commons criticised the change of the government’s message from “stay at home” to “stay alert”, questioned whether Johnson could still speak for the entire nation, and called for new work guidelines to be published before employees are expected to return on Wednesday.

Johnson denied that he has been acting as the prime minister of England after the administrations in Scotland, Wales and Northern Ireland rejected Downing Street’s new slogan.

Keir Starmer, the Labour leader, said Johnson had struggled to hold the nation together and failed to provide clarity and reassurance to concerned citizens.

“There’s not consensus either on messaging now or on policy between the UK government and those in Wales, Scotland and Northern Ireland, not something I know he [Johnson] wanted to see but now we’re in that position, [which] raises serious concerns, with a real danger of divergence,” he said. “What the country needs at this time is clarity and reassurance and at the moment both are in pretty short supply.”

The SNP’s Westminster leader, Ian Blackford, called for Johnson to accept that Scotland would continue to use the government’s previous “stay at home” message, even as the prime minister urged the UK public to “stay alert”.

“Will the prime minister confirm that he accepts and respects that in the devolved nations the advice clearly remains ‘stay at home, protect the NHS and save lives’?” he asked.

Liz Saville Roberts, the Plaid Cymru leader at Westminster, asked if Johnson could confirm that he was acting as prime minister of England.

Johnson rejected the criticisms, telling MPs the government was offering good advice for the whole of the UK. But he accepted that different places may need different policies in the short term.

Johnson’s address to the nation on Sunday prompted concern from unions and opposition politicians about the lack of a clear message. The government then published further details on Monday in a 60-page document called Our Plan to Rebuild, which recommended wearing face coverings in crowded places and allowed further activities in outside spaces such as meeting friends.

The document set out a three-step “second phase” of lockdown. Starting on Wednesday, people will be actively encouraged to return to work if they cannot work from home. From 1 June, if the R rate of the spread of the virus remains below one, some schools and businesses will reopen and sporting events will be allowed behind closed doors. Potentially from 4 July, some remaining businesses such as hairdressers and social spaces such as cinemas and pubs will be allowed to reopen.

Johnson told MPs that the divergence of advice across the UK should be temporary. “The government is today submitting to the house a plan which is conditional and dependent, as always, on the common sense and observance of the British people and on continual reassessment of the data. That picture varies across the regions and home nations of the United Kingdom, requiring a flexible response.

“Different parts of the UK may need to stay in full lockdown longer but any divergence should only be short-term because, as prime inister of the UK, I am in no doubt that we must defeat this threat and face the challenge of recovery together.”

Johnson said he has asked the Scientific Advisory Group for Emergencies (Sage) to examine when the government could safely allow people to expand their household group to include one other household. He also said parents unable to access childcare should not be expected to go to work.

Businesses across the country should be “Covid secure” and the Health and Safety Executive would enforce the rules, the prime minister said. “We will be having spot inspections to ensure businesses are keeping their employees safe.”

People should not be travelling to a second home for a holiday, Johnson said. Asked by Fay Jones, the Conservative MP for Brecon and Radnorshire, if the government’s new strategy was a green light for tourism or for people to travel to their second homes in Wales, Johnson replied: “We don’t want to see people, let me repeat, we don’t want to see people travelling to another home for a holiday or to a second home.”
#COVID
Add Comment