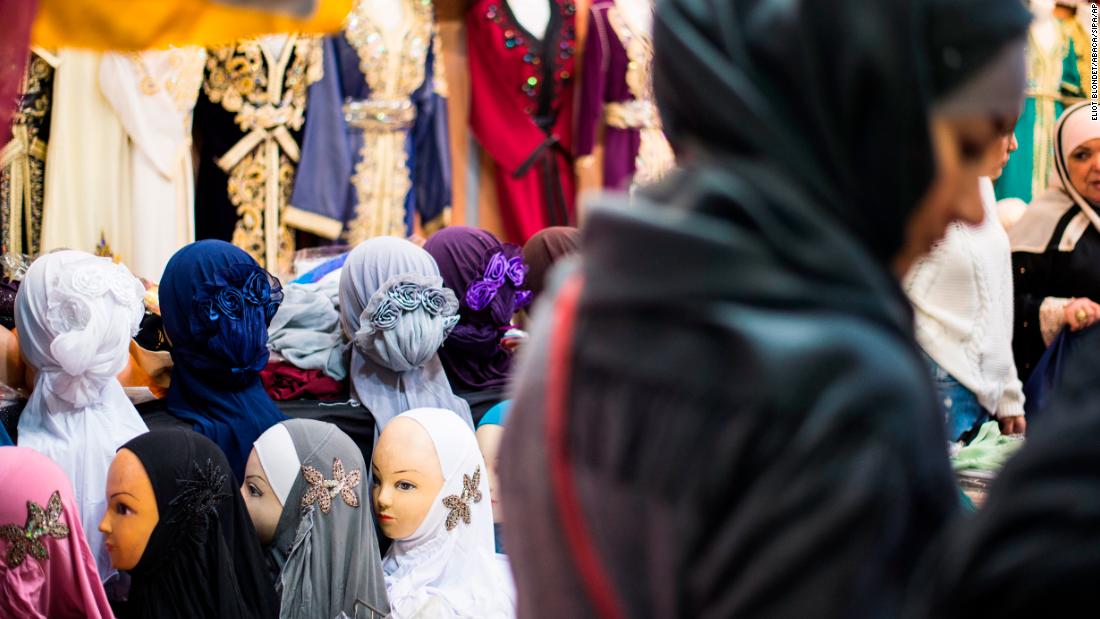 Opinion: France is on a dangerous collision course with its Muslim population

French lawmakers last month voted to ban women and girls from wearing hijab while playing sports -- showing the world once again that when it comes to further politicizing, targeting and policing European Muslim women, our clothing choices and bodies, France is in a league of its own.
The French Senate voted 160 to 143 in favor of the ban on wearing the hijab and other "conspicuous religious symbols" in sports competitions. The amendment was proposed by the right-wing Les Républicains, which argued the hijab could risk the safety of athletes wearing it while playing sports.
You really couldn't make this up.

In France, Muslim women using their agency, and exercising their human rights to wear what they choose to wear, is deemed a safety risk. France's attempt to apparently liberate and save Muslim women from ourselves and our headscarves is a racist and colonial project dressed up as upholding the country's secular values. The project heaps Islamophobic harm on Muslim women.

The proposed ban is opposed by Emmanuel Macron's government and French lawmakers expressed "regret" over the government's "lack of will" to put a stop to what they describe as the "development of Islamism in sport," CNN reported. It comes against the backdrop of a forthcoming presidential election in
April, where France's domestic politics continue to lurch further to the right, and many Muslim residents and communities of color are being subjected to divisive and toxic political rhetoric on Islam, immigration and race.

In just two years, France is also hosting the Olympics, meant to bring nations together in a united show of inclusivity on the world stage. A divisive and discriminatory hijab ban only shines a further spotlight on how ill at ease France is with building a modern multiculturalism state.

The proposed law will now be revised by the National Assembly, which is expected to have the final word. All of which means that, for now, Muslim women playing sports in hijab have been given extra time to do so with the bill prevented from being passed in its current state.

France is home to roughly 5.7 million Muslims and the largest Muslim population in Europe, according to the Pew Research Center. As of 2019, 31% of French Muslim women were wearing hijab, according to Statista, so this sports ban will have a profound impact on many women. Yet again, French lawmakers have chosen to continue on a dangerous collision course with the country's Muslim population and especially French Muslim women.

The attempts to ban Muslim women from wearing hijab while playing sports is viewed by many Muslim women and activists I've spoken to as taking a page straight out of the Afghan Taliban and Iranian regime's playbook by denying women their own agency. This ban is viewed as being about much more than denying women the right to play sports, if that wasn't outrageous enough.

I'm one of three British Muslim women campaigners and passionate football fans calling ourselves "The Three Hijabis." Last summer, alongside Amna Abdullatif and Huda Jawad, I launched a viral petition calling on England's Football Association, the British government and tech companies, to work on banning racists from football for life, following the abuse inflicted on three young Black England players after the Euro finals at Wembley against Italy.

The campaign has garnered 1.2 million signatures. Within 48 hours of our petition launching, Prime Minister Boris Johnson stood in parliament committing his government to working on delivering our demands.

Our campaign made headlines in the UK and received global media attention. However, if we were three French Muslim women, we likely would not have been permitted to enter the country's mainstream public or political space in the same way -- simply because we wear hijab.

It's a stark contrast I have experienced first-hand. In 2015, I presented a BBC documentary about what it means to be young, French and Muslim in France following the Charlie Hebdo terrorist attacks in Paris. As part of the documentary, I went to the French parliament to interview Marion Maréchal-Le Pen, France's youngest ever elected woman politician and the niece of far-right leader, Marion Le Pen.

I was told I couldn't enter the parliament building because of my hijab. I explained that I was a journalist, there to interview a politician. Yes, I'm a Muslim woman wearing hijab, but I'm also British -- "I'm as British as fish and chips," I told the receptionist in the hope she would understand that my hijab was irrelevant to how I do my job. The receptionist looked horrified and confused and then told me I could proceed for my interview.

In Europe, there is a tried-and-tested winning formula for politicians hoping to appeal to voters on the right-wing fringes ahead of national elections. And that involves turning Muslim women and our clothing choices into a political football. Many a populist European politician in Austria, Belgium, Bulgaria, Denmark, Netherlands and Switzerland, and of course France, has used this tactic as a way of attracting voters. They delve into Muslim women's wardrobes and pull out hijab, niqab and burqa as exhibits supposedly threatening the very fabric of western values and way of life.

In France, we have of course been here before. Multiple times. In 2004, France banned the wearing of hijab in schools alongside Christian crosses and the yarmulkes, worn by observant Jews. The ban was imposed, so the state said, on the grounds that state institutions are supposed to be "religiously neutral."

Then in 2010, France became the first country in Europe to impose a ban on full face veils, known as the niqab, in public spaces including public transport and parks, streets and administrative buildings. Women caught wearing a niqab in public space face a 150 euro fine and being arrested by the police.

In 2016, authorities across 15 towns and municipalities across France banned the "burkini" -- an all-in-one modest swimsuit that covers the whole body except the face. Again, the ban was imposed to supposedly uphold France's secular values.

And in May 2020, when France, like many countries across Europe and the world, made face masks mandatory in some settings like public transport to try and prevent the spread of coronavirus, France's full face veil ban remained in place. Meaning, while French citizens were required to cover their faces by law,
French Muslim women citizens covering their faces with the niqab continued to face the prospect of being fined and arrested by police.

In 2018, the United Nations Human Rights Committee said France's ban was a violation of religion and could impact Muslim women by "confining them to their homes, impeding their access to public services and marginalizing them."

When it comes to hijab and how Muslim women choose to dress, there is widespread cognitive dissonance in the French republic, illustrated once again in fine fashion by a recent Instagram post by Vogue France hailing actor Julia Fox's arrival at Paris Men's Fashion Week while wearing a Balenciaga trench coat, with a black headscarf, sunglasses and the caption: "Yes to the headscarf!"

The post attracted widespread criticism from Muslim women and others pointing out the double standard of a white, wealthy, famous, American actress being praised for wearing a headscarf as a fashion choice -- while a French Muslim woman choosing to wear a headscarf in her own country faces restrictions on her life choices and movements and possibly being fined and criminalized by the state. Vogue France later deleted the Instagram post.

This is the hypocrisy that France must grapple with. Denying Muslim women our rights in the name of upholding so called neutrality is a fig leaf for further mainstreaming anti-Muslim bigotry and misogyny against Muslim women. French Muslim women are simply not standing for it anymore, and neither are many more Muslim women outside of France. We are collectively calling time on this racism and Islamophobia.

Football and sports belong to all of us -- however we choose to dress. Let Us Play.
#Boris Johnson  #Coronavirus  #Johnson
Add Comment