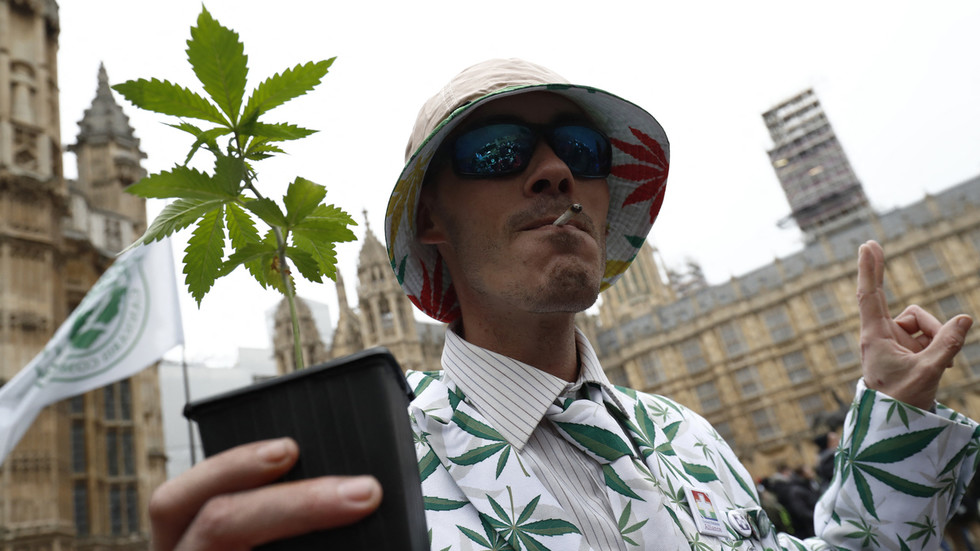 ‘Only a dope would vote for Sadiq Khan’: London mayor gets pilloried for reportedly mulling cannabis decriminalisation

Sadiq Khan has been accused of having questionable priorities after reports emerged that he would consider decriminalising marijuana use. Critics say there are far more pressing issues for the London mayor to focus on.

If re-elected in May, Khan has pledged to create an independent drugs commission to examine the potential health, economic and criminal justice benefits of adopting a more tolerant approach towards cannabis, the Guardian reported.

A source close to the mayor told the paper that “nothing is off the table in the context of what is best for public health and keeping Londoners safe.” However, the London mayor has reportedly ruled out the possibility of decriminalising possession of class-A drugs such as heroin and cocaine.

Khan does not have the powers to introduce new laws, but he plans to endorse decriminalisation if the commission concludes that it would be in the city’s interest.

The mayor apparently believes that his openness to decriminalisation could help him secure reelection, citing polls showing that nearly two-thirds of London residents support the idea. The policy is part of the mayor’s election manifesto, which is expected to be released later on Tuesday.

Countries and states that have legalised recreational cannabis see it as a way to raise public funds through taxes. Proponents also point to the policy’s ability to reduce pressure on police and courts, as an added money-saving benefit.

Many supporters of the proposal echoed similar arguments on social media, arguing that London could bolster its revenue stream by taxing and regulating the substance.

Several commenters noted that the policy was clearly designed to woo voters ahead of the mayoral contest.

But actor and activist Laurence Fox, who is running against Khan, apparently sees the mayor’s interest in decriminalisation as a political liability.

“Forgive me for being blunt, but London is in the grip of a violent crime epidemic, and our economy is going up in smoke. Only a dope would vote for ⁦@SadiqKhan⁩,” he tweeted.

Twitter users added to the list of grievances they had with Khan, with one individual joking that the mayor “must be smoking something” if he thinks his rent controls are a good idea.

There were other observers who joked that the smell of weed was already so strong in parts of London that it seemed as if the drug was already decriminalised.

Khan has faced serious political pushback for his handling of crime, the economy and the coronavirus pandemic in the UK capital. The city has suffered from a string of knife violence in recent months. In July, a report found that crime in London rose five times more than in the rest of the country last year.

The city is also struggling financially, with months of lockdown restrictions crippling many small businesses.

Khan has found unorthodox ways of addressing the social and economic crises in the city. Last month he announced that he wanted to see fewer white men working in science and engineering, claiming that alleged inequality in these fields was costing the economy “billions” of pounds a year. Supporters said he simply wanted to help under-represented groups enter the STEM sector.