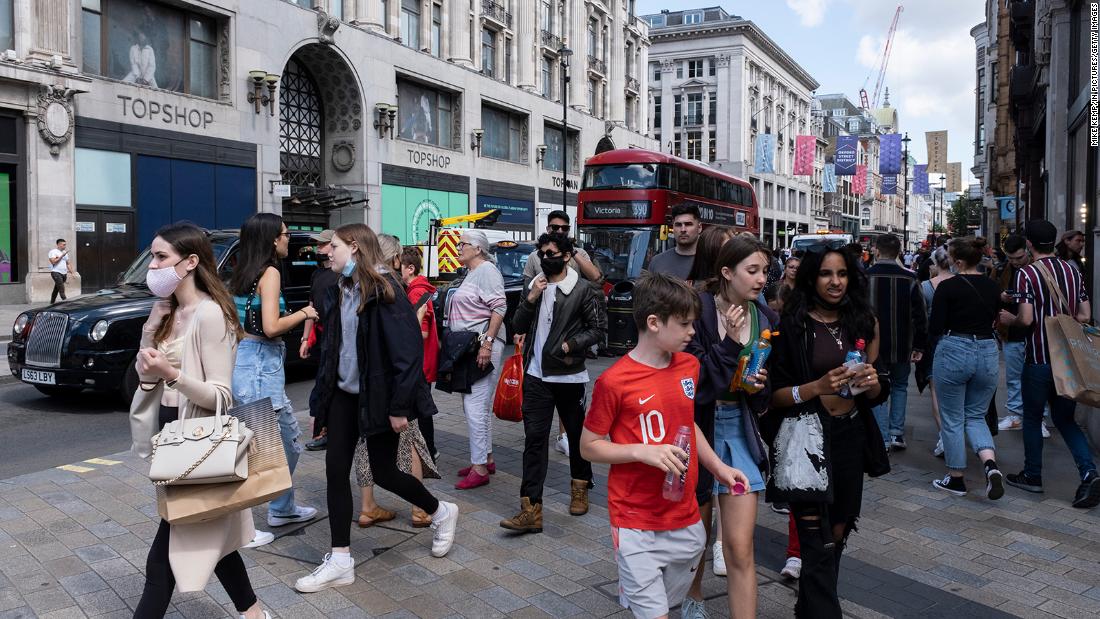 Job vacancies in the United Kingdom hit a record high last month and wages soared by 7.4% between April and June, adding to fears of a prolonged period of rising prices as companies pass on higher costs to consumers.

The strong recovery in the labor market was highlighted in data published Tuesday by the Office for National Statistics and it could further fuel inflationary pressures in the UK economy. That could prompt the central bank to hike interest rates as early as May 2022, according to some economists.

There were a record 953,000 vacancies in the United Kingdom on average over the three months to July — 168,000 more than the first quarter of 2020 before coronavirus restrictions were introduced.

For July alone, vacancies may have exceeded one million for the first time based on early survey figures, according to Jonathan Athow, ONS deputy national statistician for economic statistics.

Vacancies in all industries increased, with arts, entertainment and recreation posting the fastest rate of growth following the lifting of all remaining social distancing restrictions in England on July 19.

"The world of work continues to rebound robustly from the effects of the pandemic," Athow said in a statement.

The unemployment rate fell 0.2 percentage points to 4.7%, according to the ONS. Athow said that there were no signs of redundancies starting to pick up ahead of the end of the government's furlough program, which supports wages, at the end of next month.

Worker shortages could place a drag on the recovery, however. Some pubs and grocery stores had to close last month because of the number of employees required to quarantine after coming into contact with someone who had tested positive for Covid-19.

The UK government has since scrapped this rule for people who are fully vaccinated, but the impact of the pandemic and Brexit has meant fewer EU citizens to fill jobs in industries such as retail, farming and logistics.

"Although the changes to self-isolation rules will help, with many firms facing a more deep-rooted squeeze on labor supply from the impact of Covid and Brexit, staff shortages may persistently weigh on economic activity," head of economics at the British Chambers of Commerce, Suren Thiru said in a statement on Tuesday.

There are already signs that a shortage of workers is placing upward pressure on wages. According to the ONS, growth in average total pay excluding bonuses was 7.4% in the three months to June compared with the same period in 2020.

Even after stripping out factors such as the fall in the number of lower-paid jobs, the ONS data suggest that annual wage inflation was running between 3.5% and 4.9% in June, according to Berenberg senior economist Kallum Pickering.

"It remains well above the mere 2% average rate from 2009-2019," Pickering wrote in a research note. "With unemployment falling from an already low level and labor demand surging to well past previous record highs, the risks to the wage growth outlook look skewed to the upside," he added.

"Together, these factors point to further inflation pressures ahead as firms try to pass on cost rises to consumers," Pickering said.

Data out Wednesday showed that UK inflation dipped unexpectedly to 2% in July from 2.5% the previous month, as prices for clothing, footwear and recreational goods rose at a slower pace than in June, the ONS said.

The "tumble" in inflation "feels remarkably like the calm before the storm," ING economist James Smith said in a research note. Smith said there was little doubt that headline consumer price inflation would go "well above" 3% later this year.

The Bank of England said earlier this month that it expects inflation to rise even further above its 2% target in the coming months and that it will set interest rates to ensure inflation returns to that level.

"We continue to look for the first rate hike in August 2022. But the strengthening inflation dynamic and strong recovery in domestic demand suggest the risks are tilted towards a hike even sooner that — perhaps as early as May 2022," Pickering added.