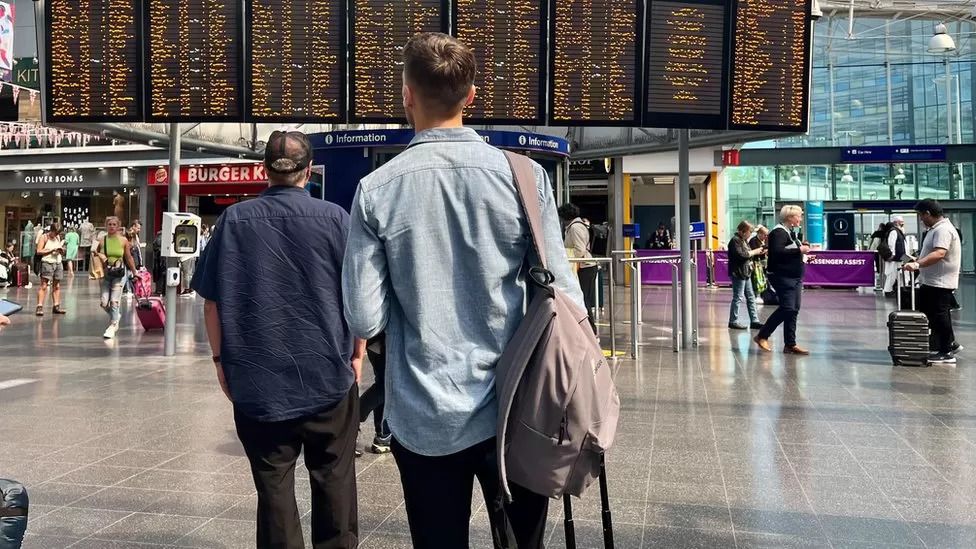 Business leaders in the north of England are warning rail services could "collapse into utter chaos" by January unless the government takes action.

Members of the Northern Powerhouse Partnership have written to ask the transport secretary to address a crisis they say is "wreaking havoc".

Rail travel in northern England has been severely disrupted in recent months by strikes and cancellations.

The government agreed the current situation was "unacceptable".

It said it was "investing billions" in northern transport and was "working closely with train operators" to resolve problems around the recruitment of new drivers.

But Juergen Maier, former chief executive of Siemens UK and a vice chair of the Northern Powerhouse Partnership, said the government had failed to "use the levers only it can pull, to sort out or train services".

Although train travel has been disrupted across the whole of the UK this year, northern operators, including Avanti West Coast and TransPennine Express have come under particular scrutiny.

Passengers to, from and across the region have faced reduced timetables, crowded services, last-minute cancellations and delays.

The Northern Powerhouse Partnership said recruitment of new train drivers, one source of the disruption, was held back by the failure to agree new overtime working arrangements at some rail operators, including at TransPennine.

They called on the government to open the way for new "rest day working" arrangements. Drivers at most operators can choose to work on their days off - or "rest days" - when they are expected to give training and be on standby to cover drivers who call off sick.

TransPennine had a rest day working agreement in place until last autumn, but it has not been able to agree on new terms with its drivers since then. That leaves the operator more at risk of last-minute cancellations.

"We are not able to continue as we are," said Mr Maier. "If we do not get approval for a rest day working agreement to be negotiated this week it will be too late."

Without a new agreement the system would collapse into "utter chaos", he said.

Cancellations have already cut off the Humber for "days at a time" and reduced access to Manchester Airport, forcing people into their cars instead, the Northern Powerhouse Partnership said.

Transport Secretary Mark Harper, who is due to meet city mayors from across the region later this week, said services would be improved by having "a proper seven-day railway".

"We have days in the week when train services are completely dependent on the goodwill of people coming in to work on their days off. That isn't how you run a modern railway that people depend on for running their daily lives," he said.

In their letter to Mr Harper, the vice chairs of the Northern Powerhouse Partnership, Mr Maier, and crossbench peer Lord Jim O'Neill, said the situation was already "wreaking havoc on the northern economy".

TransPennine apologised for the disruption and said work was continuing to address the impact of sickness and a shortage of drivers, which would normally have been significantly mitigated by rest day working arrangements.

"We are sorry to anyone who has been affected by this ongoing disruption," a spokesperson said. "This has been caused by high levels of traincrew sickness, an intensive crew training programme (which includes a training backlog as a direct result of Covid), and infrastructure issues outside of our control."

The operator said it had invested in a fleet of new trains and now had 70 more drivers than the 500 it had in 2019.