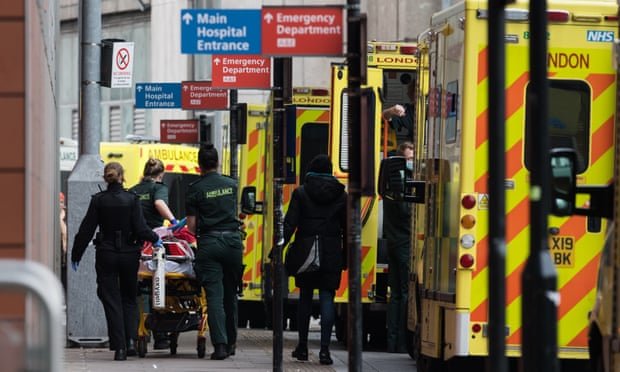 Dealing with the deadly second wave of Covid has left the NHS in the most precarious position in its 72-year history, chief executive Sir Simon Stevens has warned, as ministers said they were aiming to get all adults in the UK vaccinated by September.

The over-70s and clinically extremely vulnerable, who number more than 5.5 million nationwide, will be invited to receive the vaccine from Monday in areas where most of the first priority groups of care home residents and the over-80s have now had the jab.

Stevens said on Sunday that the NHS was now giving 140 jabs a minute, as the race to vaccinate the public picks up, but warned of the stress the service was under.

“Since Christmas Day we’ve seen another 15,000 increase in the inpatients in hospitals across England. That’s the equivalent of filling 30 hospitals full of coronavirus patients and, staggeringly, every 30 seconds across England another patient is being admitted to hospital with coronavirus.”

Asked by the BBC’s Andrew Marr if the NHS had ever been in a more precarious position, he said: “No. I think this is a unique event in our 72-year history. It’s sort of become glib to talk about this as the worst pandemic in a century but that is clearly correct.”

He also conceded that a “small number” of patients are having to be transferred from one region to another when beds are not available for them.

However, Stevens also highlighted the rapid pace of the vaccination programme. Official figures published on Sunday showed that more than 3.8 million people have now received their first dose of a Covid vaccine in the UK.

“This is a huge team effort. This is bringing together the NHS, the St John’s Ambulance volunteers, the Royal Voluntary Society, we are vaccinating not just in health centres and hospitals, but in village halls and rugby clubs and cathedrals and shopping centres and race courses, so everybody is coming together to get this done and I think we’re off to a very strong start,” he said. 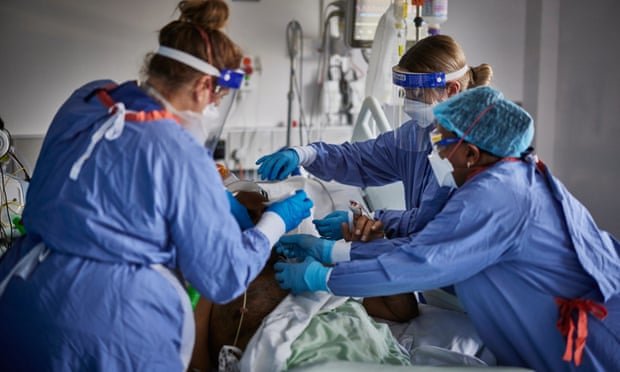 Nurses in the intensive care unit at Milton Keynes university hospital tend to a Covid-19 patient this month.

Commenting on the expansion of the vaccine programme to new cohorts, the health secretary, Matt Hancock, said: “Where an area has already reached the vast majority of groups one to two, they can now start opening up the programme to groups three to four.

“We are working day and night to make sure everyone who is 70 and over, our health and social care workers and the clinically extremely vulnerable are offered the vaccine by the middle of February, and our NHS heroes are making huge strides in making this happen.”

“The plan is to get the first 15 million most vulnerable people vaccinated with the first dose by the middle of February,” he told Marr. “We then want to get, by early spring, another 17 million. At that point we’ll have 99% of those most at risk of dying of coronavirus administered their first jab, and then the entire adult population we want being offered a first jab by September. That’s the roadmap.”

He added: “Obviously if it can be done more swiftly than that, then that’s a bonus.”

In a separate interview with Sophy Ridge on Sky News, Raab was unable to guarantee that all of those who have already received a first dose of vaccine would get their second within the recommended 12-week timescale – though he said he was “quietly confident” it could be done.

“If we follow the roadmap and the supply chains … we ought to be able to deliver on that,” he said. “But right the way through this pandemic we’ve had to adapt to all sorts of different things. We’re just focused on making sure we deliver on the roadmap we’ve got.”

The government had already stretched the gap between the two doses on advice from the independent Joint Committee on Vaccination and Immunisation to give protection to as many people as possible, as soon as possible.

The latest data suggests that the lockdown has begun to turn the tide, with the number of new cases in the week to Sunday at 323,614, down 22.5% on the previous week.

But with hospital admissions and deaths still extremely high, experts have stressed the importance of sticking to lockdown restrictions.

Another 671 deaths were reported on Sunday to have taken place within 28 days of a positive test, and 4,179 people were admitted to hospitals with Covid. 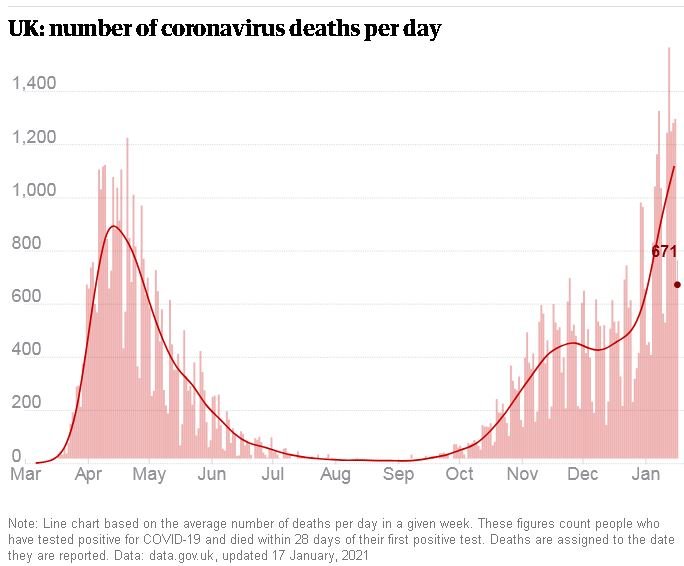 Robust new border restrictions will come into effect at 4am on Monday morning, aimed at preventing new variants of the disease finding their way into the UK.

New arrivals will have to show they have had a negative test within 72 hours of travelling, and to quarantine for 10 days – unless they pay to take a test after five days, which yields a negative result.

The government has repeatedly been criticised throughout the pandemic for failing to control the UK’s borders, but ministers had become particularly concerned about the Brazilian variant of the virus. It is unclear yet whether this strain may be vaccine resistant.

Stevens said the appearance of virus mutations was one of the factors that would determine when lockdown restrictions can be lifted.

“It’s not going to be the case that on Valentine’s Day, or on 15 February, with one bound we are free. But equally I don’t think that we will be having to wait until the autumn. I think somewhere between those two,” he said, when asked when the rules could shift.

“Subject of course to this uncertainty about new variants of the coronavirus. And it will be very important that we don’t see those taking off in a way that undermines the effectiveness of vaccines that we currently have.”