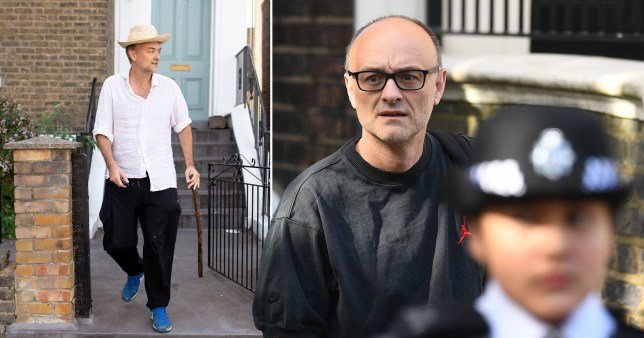 A couple who claim they saw Dominic Cummings on a second trip to Durham during lockdown have complained to a police watchdog about the officers investigating their report.

Boris Johnson’s chief aide previously admitted driving 260 miles to Durham with his wife and son on March 27, despite the strict coronavirus restrictions in place at the time. He then denied that he had made a second trip to the area on April 19 after a anonymous witness claimed to have seen him in Houghall Woods that morning.

Now new witnesses Dave and Clare Edwards have gone public with claims they also saw him in the same woodland on the morning of April 19. The couple told The Mirror they are ‘100% certain’ it was Mr Cummings, and reported their alleged sighting to Durham Police in May.

A fourth witness, who wishes to remain anonymous, also told the publication they saw Mr Cummings in the area at the same time. Another individual told The Guardian they saw the political strategist in Hampstead Heath on the same day in the afternoon.

Durham Constabulary stated that they had insufficient evidence to support the allegations of Mr Cummings making a second trip. Mr and Mrs Edwards then decided to put in a Subject Access Request to find out how the force had handled their report. Visit our live blog for the latest updates: Coronavirus news live

They received the details last week, but felt the information showed their claims had not been taken seriously, causing them to file an official complaint with the Independent Office for Police Conduct (IOPC) on Wednesday.

In the complaint, the couple say it was ‘inconceivable’ that the matter was not ‘followed up thoroughly’ due to the ‘high profile nature’ of the case. They state that they have ‘no personal issue’ with Mr Cummings and his family, but asked the IOPC to ‘investigate whether Durham Police acted thoroughly in their investigation of this matter’.

During a press conference in May, Mr Cummings told reporters he and his wife had become ill, causing them to travel to Durham so they could be close to his parents should they need child support.

His actions were supported by the Prime Minister, who argued that he had acted ‘responsibly, legally and with integrity’ and followed ‘instincts’ that every parent could understand.

The chief aide said he had returned to London on April 13 and denied he went back to Durham on April 19. He told reporters he had phone metadata which would prove he was in London on that date.

He said: ‘Photos and data on my phone prove this [accusation] to be false. And local CCTV, if it exists, would also prove that I’m telling the truth that I was in London on that day. I was not in Durham.’

Johnson later stated that he had seen the evidence Mr Cummings had referenced, telling MPs on the Commons liaison committee that it was ‘time to move on’.

‘The Prime Minister has said he believes Mr Cummings behaved reasonably and he considers the matter closed.’ A Durham Constabulary spokesman said: ‘As outlined in our statement of May 28, Durham Constabulary carried out an investigation into this matter led by a senior detective and found insufficient evidence to support the allegation.’