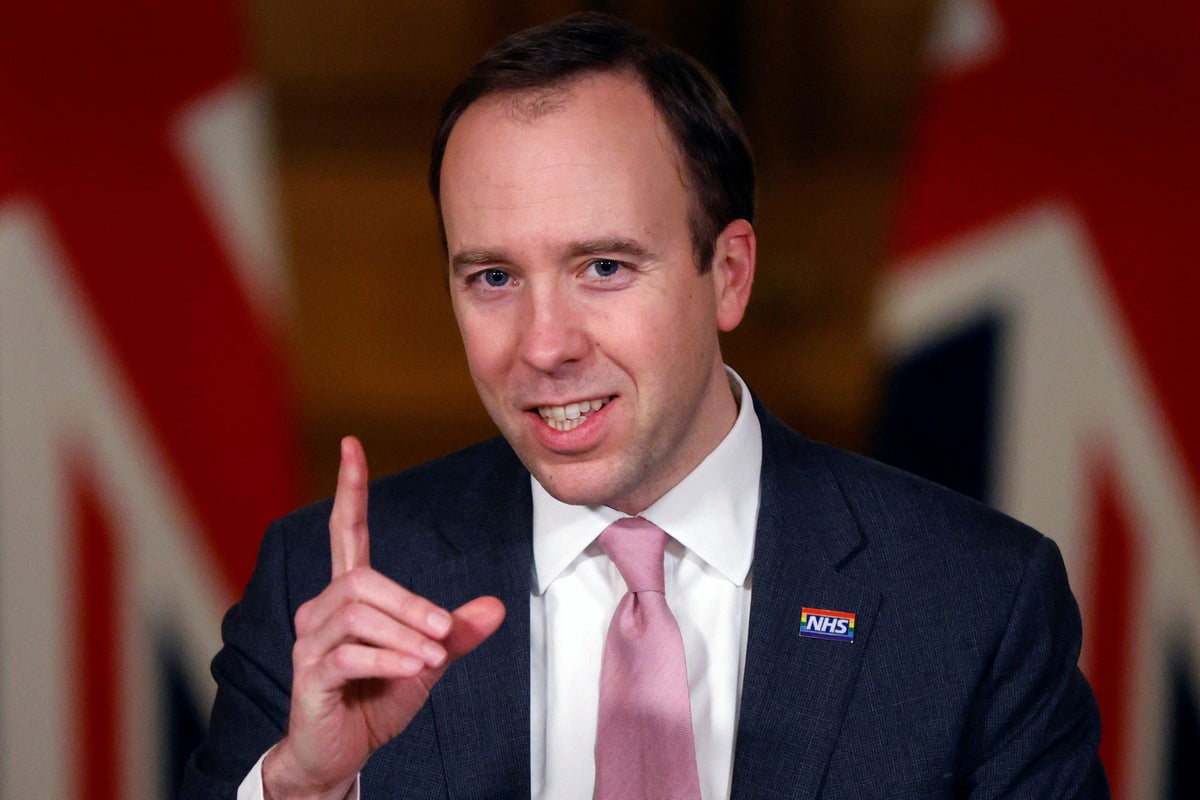 Nearly four in five of all over-80s in the UK have now received a coronavirus jab, the Health Secretary has said.
Matt Hancock told a Downing Street press conference that 6.6 million people overall — one in nine of the UK adult population — had been given the first dose of the vaccine, including 78.7 per cent of those 80 or older.

He said the vaccine roll-out was “on track” to give jabs to 15 million of the most vulnerable people — including the over-80s — by February 15, but warned that supply was currently “tight”.

And he reiterated the importance of following lockdown measures despite the promising figures. “Even if you have had the jab, the rules still apply,” he said.

“We’re making progress with the vaccine, the end is in sight, an we cannot put that progress at risk.”

It came after the UK recorded 592 more coronavirus deaths on Monday. It brings the overall death toll to around 98,531, although figures published by the UK’s statistics agencies show there have now been 115,000 deaths involving Covid-19 in the UK.

There were 22,195 new cases reported, the lowest figure since December 15.

In his opening remarks at Downing Street Mr Hancock also attempted to make the case for the union, amid concerns over increasing support for Scottish independence.

He said that the Scottish Ambulance Service put out an appeal for extra help over the weekend and other nations “stepped forward”. “

Our health systems across the UK routinely work closely together offering support when it’s needed and from vaccines to ambulance services we are stronger together. And the UK is stronger together in the fight against this pandemic,” Mr Hancock said during a Downing Street press conference.

He said there are “early signs that the actions we are taking are working”, with the rise in case numbers slowing and falling in some areas such as London and Scotland.

The number of Covid-19 patients in hospital in England stood at 32,938 as of 8am on Monday January 25, according to the latest figures from NHS England.

This is down 4 per cent on a week ago, and is the third day in a row that the number has fallen week-on-week. In London case numbers have fallen faster, with a 11 per cent drop week on week.

Two regions have seen a week-on-week rise in the number of Covid-19 patients: the Midlands, which has 6,330 patients, up 1 per cent; and north-east England/Yorkshire, which has 3,891, up 3 per cent.

Earlier on Monday Boris Johnson revealed the Government was “looking at the potential of relaxing some measures” by mid-February, although Downing Street later sought to clarify the remarks and said ministers would “keep the latest scientific evidence and data under review”.

At the press conference, Mr Hancock said that “now is not the moment” to ease up on restrictions.

He set out the factors the Government would take into account when reaching decisions over whether to lift coronavirus restrictions, which included: the death rate, the number of people in hospital, whether there were new coronavirus variants that significantly affect the course of the pandemic, and the success of the vaccine rollout.

Mr Hancock added: “We will look at all of these factors and make sure that we take the steps, as soon as it’s safely possible to do so of course, but when it is safe, which means that we’ve got to be carefully.”
#COVID-19  #vaccine  #Covid  #Coronavirus  #Boris Johnson  #Vaccines
Add Comment