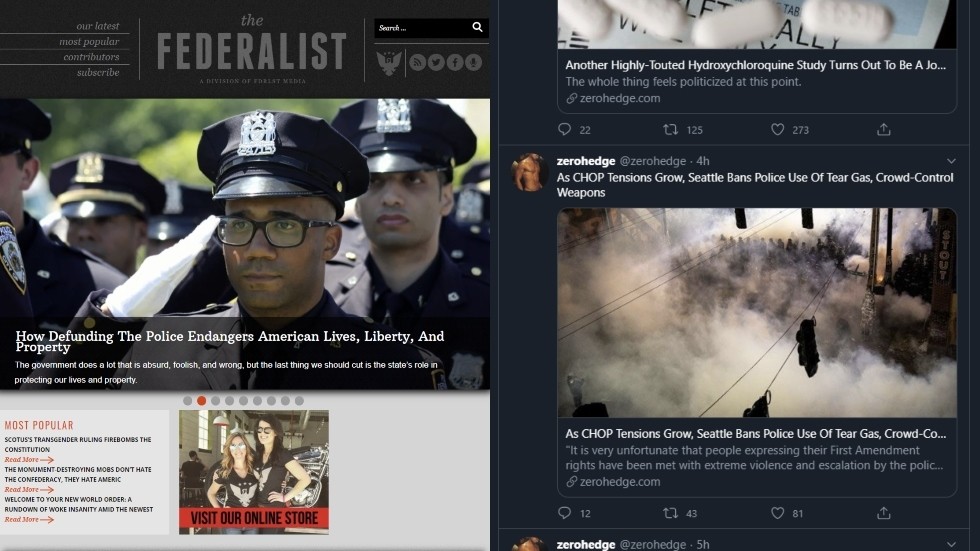 NBC colludes with UK thought police to get ZeroHedge & Federalist deplatformed from Google Ads, smear them as ‘far-right’

Google has threatened to drop ZeroHedge and the Federalist from its ad platform after NBC and a UK ‘cyber-hate’ watchdog denounced the outlets for allegedly publishing “fake news” about the ongoing George Floyd protests.

After initially reporting Google had “removed both sites’ ability to monetize” via Google Ads after they were found in violation of the platform’s rules regarding race-related speech on Tuesday, NBC quietly stealth-updated its article to reflect that the tech behemoth had banned ZeroHedge last week and had merely notified the Federalist of outstanding violations. The Federalist supposedly has three days to remedy the offending content – which is apparently located in the comments section, not its articles.

Will a single American MSM outlet have the integrity to say ‘We don’t agree with @FDRLST & @zerohedge, but we’re alarmed when news sites lose livelihoods because of anti-free speech activists colluding with corporate censors’? https://t.co/PPWBPfceZW

NBC nevertheless patted itself on the back for a job well done, bragging that its “News Verification Unit” notified Google of “research conducted by the Center for Countering Digital Hate,” a UK outfit that lobbies social media platforms to censor “wrongthink” perpetrators.

CCDH runs a “Stop Funding Fake News” campaign, attempting to guilt brands that have made statements in support of Black Lives Matter into pulling their ads from platforms that publish stories that don’t fit the accepted narrative about the movement. As part of that effort, CCDH singled out 10 US-based websites, claiming not only had they published “racist articles” about the George Floyd protests against racism and police brutality, but that they would make “millions of dollars” off the offending articles through Google Ads.

Google confirmed the Federalist was never actually demonetized in a tweet after NBC updated its article. However, the original version of NBC’s article cited a Google spokesperson clearly stating “we’ve removed both sites’ ability to monetize with Google,” explaining both sites “violated its policies on content related to race.”

The Federalist was never demonetized.

In its self-congratulatory writeup, NBC took care to avoid describing either outlet’s transgressions in detail, instead explaining that both had “become well known in recent years for publishing far-right articles on a variety of subjects” – a blanket condemnation readers of both outlets would no doubt contest. Without linking to the offending articles, the network accused ZeroHedge of “claiming that protests were fake” in one article and claimed the Federalist had “published an article claiming the media had been lying about looting and violence during the protests.”

While it’s impossible to tell without a link, the Federalist specifically called out NBC for directing its reporters not to use the word “riot” to describe the violent unrest unfolding in Minneapolis in the days following George Floyd’s killing – an act which might have triggered the network’s wrath.

The deplatforming raised more than a few eyebrows on social media as commenters wondered when it became acceptable journalistic practice to rat out one’s competitors for insufficient wokeness.

A leftwing activist masquerading as a NBC journalist helped bully @Google into pulling ad revenue from The Federalist because they criticized a political movement they disagree with.

Big Tech & the MSM are working together to shutdown all dissent pic.twitter.com/a6ziAN84lq

Some questioned when Google had begun demonetizing sites over the content of their comment sections – a policy that would seem to fly in the face of Section 230 protections, which don’t only apply to giant tech platforms.

A handful of threats ominously suggested the Daily Caller was “next.”

I hate the word "chilling," but every bit of this is exactly that.

NBC effectively got The Federalist kicked off Google Ads by citing a British think tank that was upset that Federalist had an article that noted looting and rioting at Floyd protests. https://t.co/hZyGVH6z8k pic.twitter.com/UUFxVcR5LS

The conservative outlet filmed and reported on Washington DC rioters’ attack on an NBC news crew just after midnight on June 3 – something the channel itself conspicuously avoided doing, going out of its way to avoid mentioning the violent interruption to what was otherwise reportedly a peaceful night.