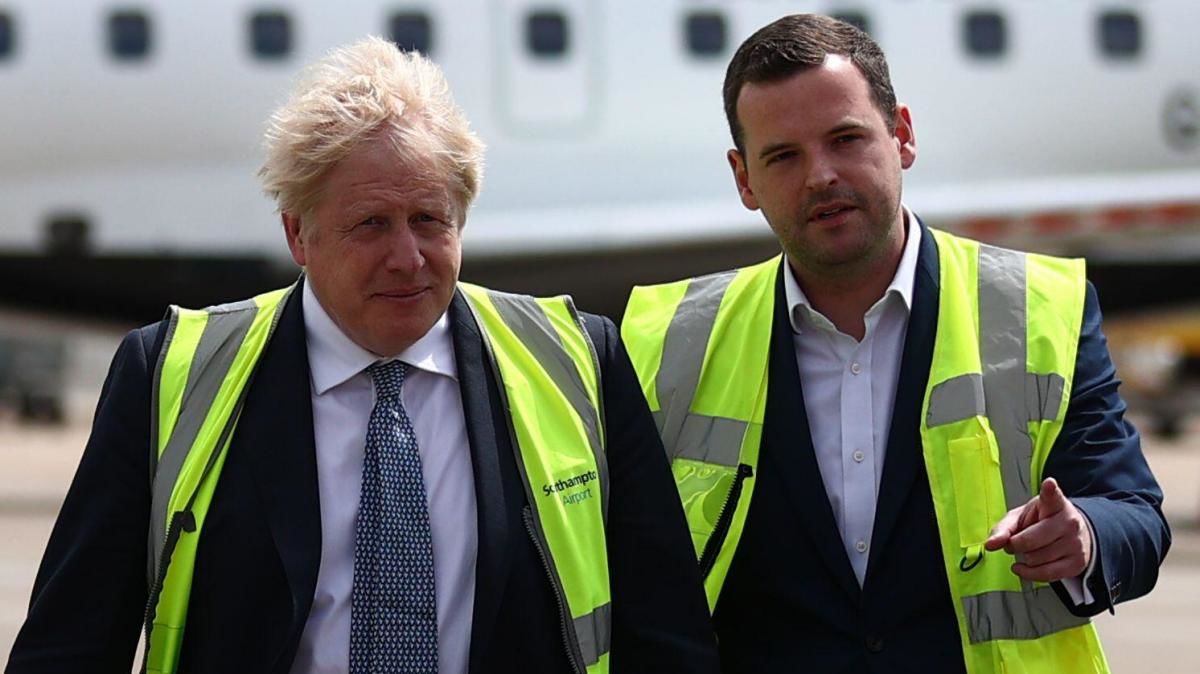 A Tory MP who has quit a government job over Partygate says he was "shocked and appalled by what's been going on".

Paul Holmes told the BBC he felt "deeply uncomfortable" with the findings of Sue Gray's inquiry into lockdown parties in No 10.

It comes as Sir Bob Neill became the latest Conservative MP to call on Boris Johnson to quit over the Gray report.

Sir Bob, a former junior minister, said it had "highlighted a pattern of wholly unacceptable behaviour".

He has become the fifth MP to call on the prime minister to resign since Ms Gray's final report was published on Wednesday.

He has also submitted a letter of no confidence in the PM.

The BBC is aware of about 20 Tory MPs who have now submitted letters, short of the 54 required to force a vote on Mr Johnson's leadership.

However, only Sir Graham Brady, chairman of the 1922 Committee of backbenchers, knows the exact number, which could be more.

Speaking on BBC Radio 4's Any Questions, Treasury minister John Glen said the prime minister was in "yellow card territory" but said he would continue to "get on and deliver" as part of the government.

In her report, senior civil servant Sue Gray said many events held during Covid restrictions "should not have been allowed" and the prime minister and his officials "must bear responsibility for this culture".

She also found "multiple examples of a lack of respect and poor treatment" of security staff and cleaners by officials when gatherings took place.

Sir Bob told the BBC he had made his decision to call on Mr Johnson to resign after speaking to constituents, adding he was "not part of any campaign group" to unseat the PM.

He added what had gone on had "eroded trust" in government, and he found Mr Johnson's explanation he was unaware of the nature of parties in No 10 not credible.

"I can't believe he was not aware about at least some of what was going on," he added.

In a statement earlier, Mr Holmes said he had resigned as a parliamentary private secretary - a ministerial aide - to Home Secretary Priti Patel.

The Eastleigh MP added that his work for constituents had been "tarnished by the toxic culture that seemed to have permeated No 10."

But speaking to BBC South Today, Mr Holmes insisted his resignation was "not about the leadership, this is not about letters or the 1922 committee".

Ms Gray's report follows a four-month Metropolitan Police inquiry that saw 126 fines issued to 83 people - including Mr Johnson, his wife Carrie and Chancellor Rishi Sunak - for events that took place in 2020 and 2021.

Before Mr Holmes announced his resignation, Mr Johnson told reporters he was confident he has enough support within his party to stay in post - but he deflected questions on whether he had tolerated the culture of heavy drinking and rule-breaking highlighted by Sue Gray.

"If you look at the answers in the House of Commons over more than two hours, I think you'll be able to see I answered that very, very extensively," said the PM.

Elected as MP for Eastleigh, in Hampshire, at the 2019 general election, Mr Holmes has been a parliamentary private secretary to Ms Patel since September 2021.

The unpaid role is the bottom rung of the government ladder, and is often seen as a way for newer MPs to gain experience of working with ministers.

His resignation makes him the second Tory to have left a government post over the Partygate saga.

In April, Lord David Wolfson quit as a justice minister, saying the "scale, context and nature" of Covid breaches in government was inconsistent with his responsibility to uphold the rule of law.

Another of the 2019 intake of Conservative MPs, Alicia Kearns, has reiterated that her position is "unchanged" since January, saying that the prime minister "continues not to hold my confidence".

The MP for Rutland and Melton said she could only conclude that "the prime minister's account of events to Parliament was misleading", adding that the "protracted affair has brought our government and my party into disrepute".