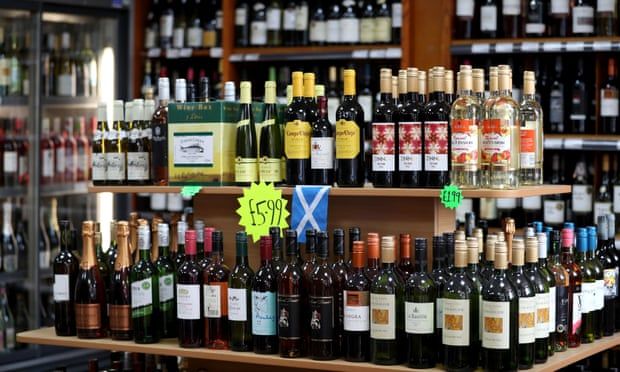 Some problem drinkers also reducing heating to afford rising alcohol costs, according to Public Health Scotland
Scotland’s minimum alcohol pricing policy has not encouraged problem drinkers to consume less but has prompted some to cut back on food or heating in order to afford rising costs, according to the first evaluation of its impact on those who drink alcohol at harmful levels.

The Scottish National party’s flagship policy, championed by Nicola Sturgeon when she was health minister and introduced after successive court challenges by the Scotch Whisky Association, came into force in May 2018. It introduced a legally enforced minimum price for all alcoholic drinks of 50p a unit and aimed to tackle chronic alcohol abuse by targeting low-cost, high-strength drinks.

But the latest evaluation of minimum unit pricing (MUP), published on Tuesday by Public Health Scotland, found those who suffer the worst affects of alcoholism did not change their habits after the policy was introduced, with the poorest among them experiencing “increased financial strain” as price rises meant they were spending more on drink, causing them to cut back on other expenditure such as food and utility bills.

The study by the University of Sheffield, the University of Newcastle in Australia and Figure 8 Consultancy Services, focused on the “hard to reach” population of people who drink alcohol at harmful levels, including those dependent on alcohol and those accessing treatment services.

But it also found little evidence of other negative consequences such as increased crime or a shift to illegal drug use. It also discovered that people with alcohol dependence had a limited awareness and understanding of minimum unit pricing as a policy and had received little information about it before its introduction.

Laura Mahon, the deputy chief executive of Alcohol Focus Scotland, said the study gave “much-needed information about the additional support required by the groups included in the research. We need real investment in recovery-oriented alcohol services to ensure people get the right support when they need it, wherever they live.”

She added: “At a population level MUP appears to be having positive benefits. We’ve seen a sustained decrease in how much we are drinking overall since the policy was implemented. Alongside this there have been encouraging reductions in hospital admissions from alcohol-related liver conditions and an initial 10% fewer alcohol-related deaths in 2019.”

Previous evaluations have found the policy had an impact on sales: a year after its introduction, in June 2019, figures showed alcohol sales had fallen to their lowest level in 25 years. A similar policy was introduced in Wales in 2020.
Add Comment