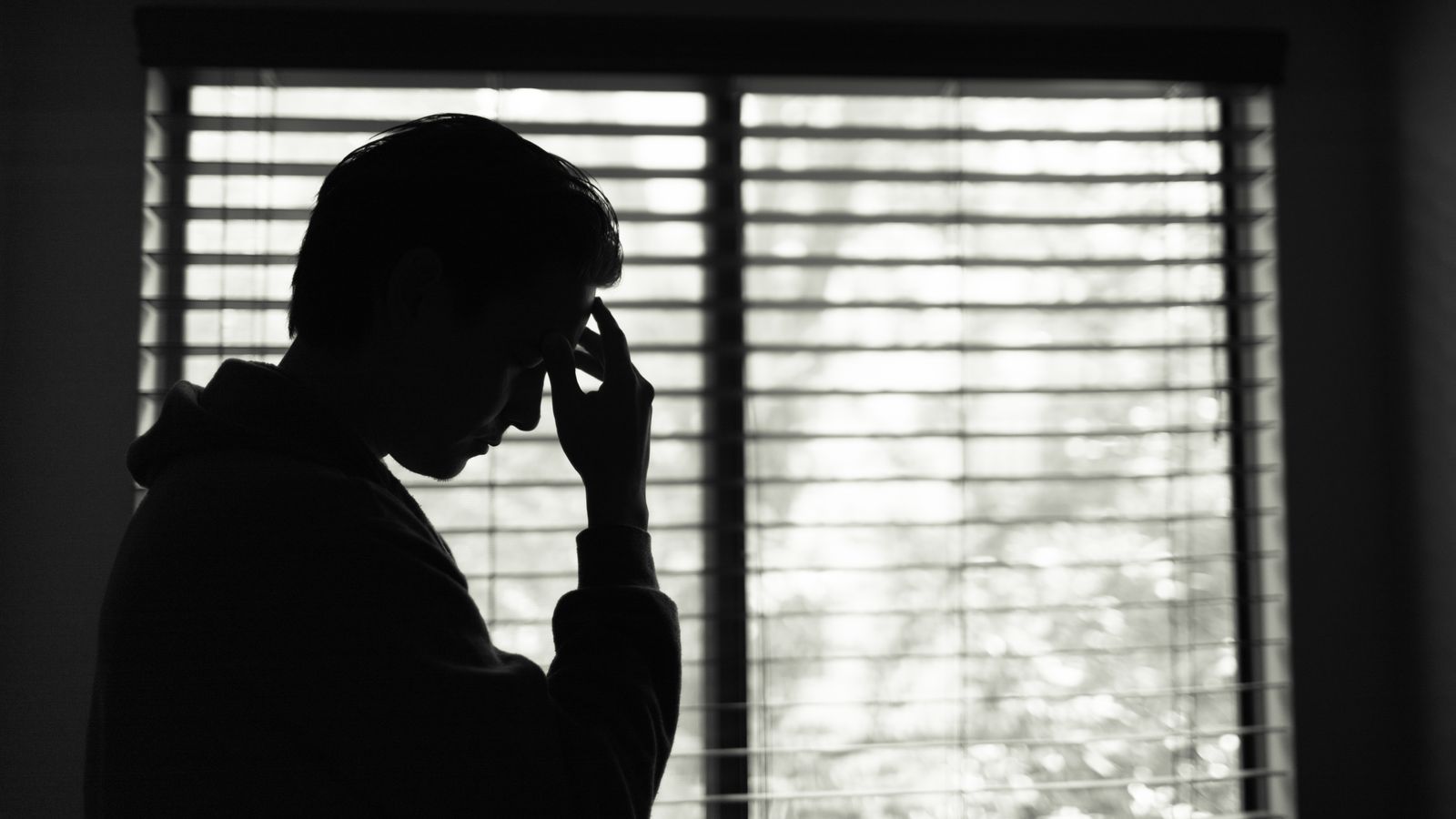 The number of people neither working nor seeking work has risen to almost nine million - figures analysed by Sky News show that this is being driven by long-term sickness and, in particular, mental health conditions.

Britain is in the grip of a mental health crisis that is causing workers to drop out of the labour market and fuelling staff shortages.

The number of people neither working nor seeking work has ballooned since the pandemic to almost nine million.

Figures analysed by Sky News show that this is being driven by long-term sickness and, in particular, mental health conditions.

Some 454,300 can be attributed to mental health conditions, such as depression, stress and anxiety orders. The figures relate to those aged 16 and over.

Plummeting participation rates pose challenges for businesses. Although the number of job vacancies is falling after a post-lockdown jobs boom, they remain near record levels.

This means employers have fewer workers to choose from when filling roles and limits the economy's potential to grow.

The figures also suggest that employers could better support the workers they do have. The number of employed people with long-term mental health conditions jumped by 816,400 over the same period. 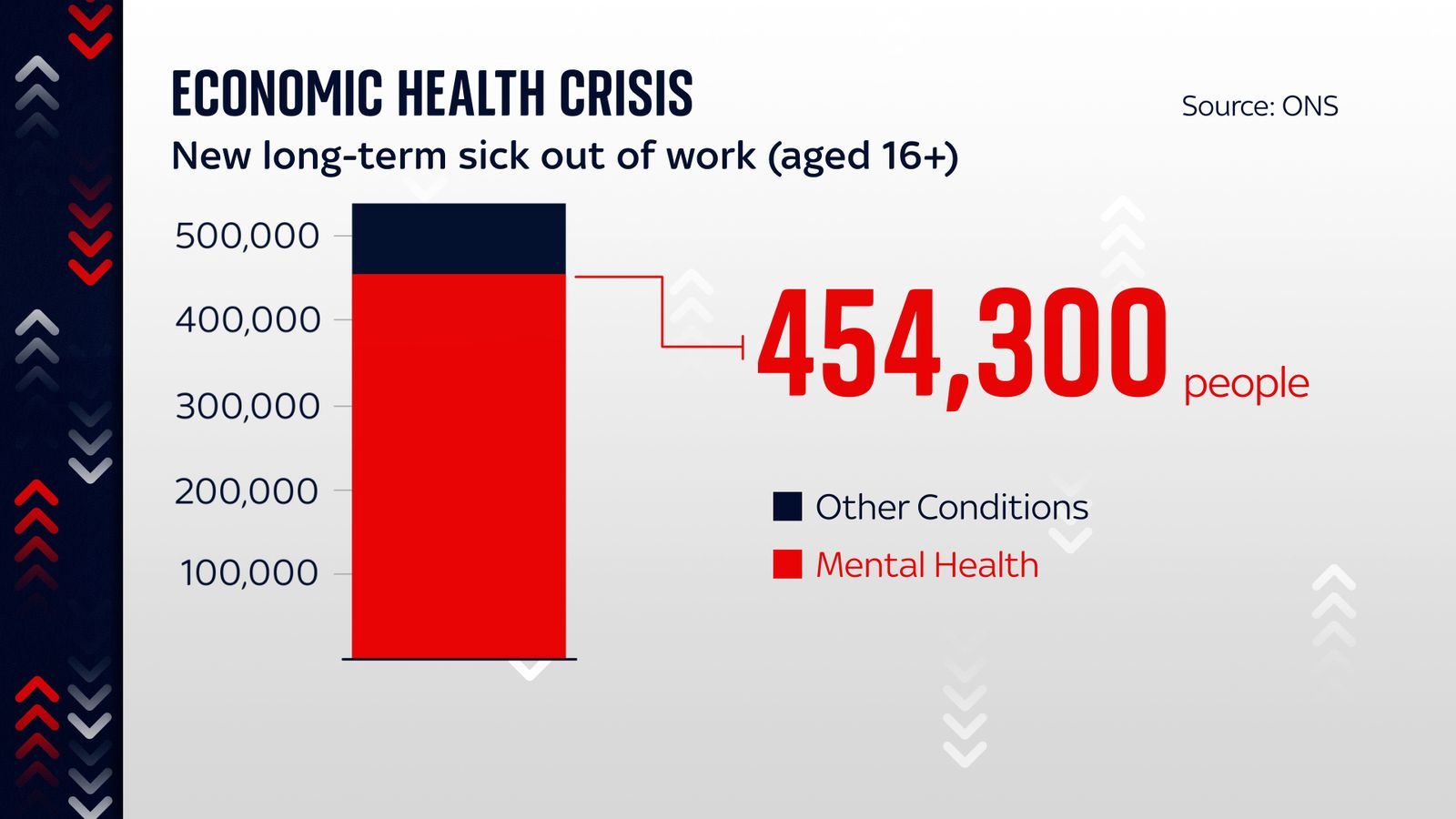 Those off work due to mental health conditions jumped by 454,300
A recent report by the professional services firm Deloitte found that the annual costs to UK employers of poor mental health have increased by 25% since the start of the pandemic. This can be measured in levels of absenteeism, productivity and turnover.

Policymakers are alert to the problem.

Rise in economic inactivity will 'hold UK growth back'

Jonathan Haskel, a member of the Bank of England's rate-setting committee, warned last month: "In most countries in the developed world, the economic inactivity rate, that is the proportion of people neither working nor actively searching for jobs… increased during the pandemic, but then fell back.

"But the UK is different….This rise in economic inactivity will hold UK growth back."

Growth will be key for the government as it seeks to fill a gaping hole in public finances. If more people are out of work it means smaller tax receipts for the Treasury and higher levels of spending on unemployment benefits. 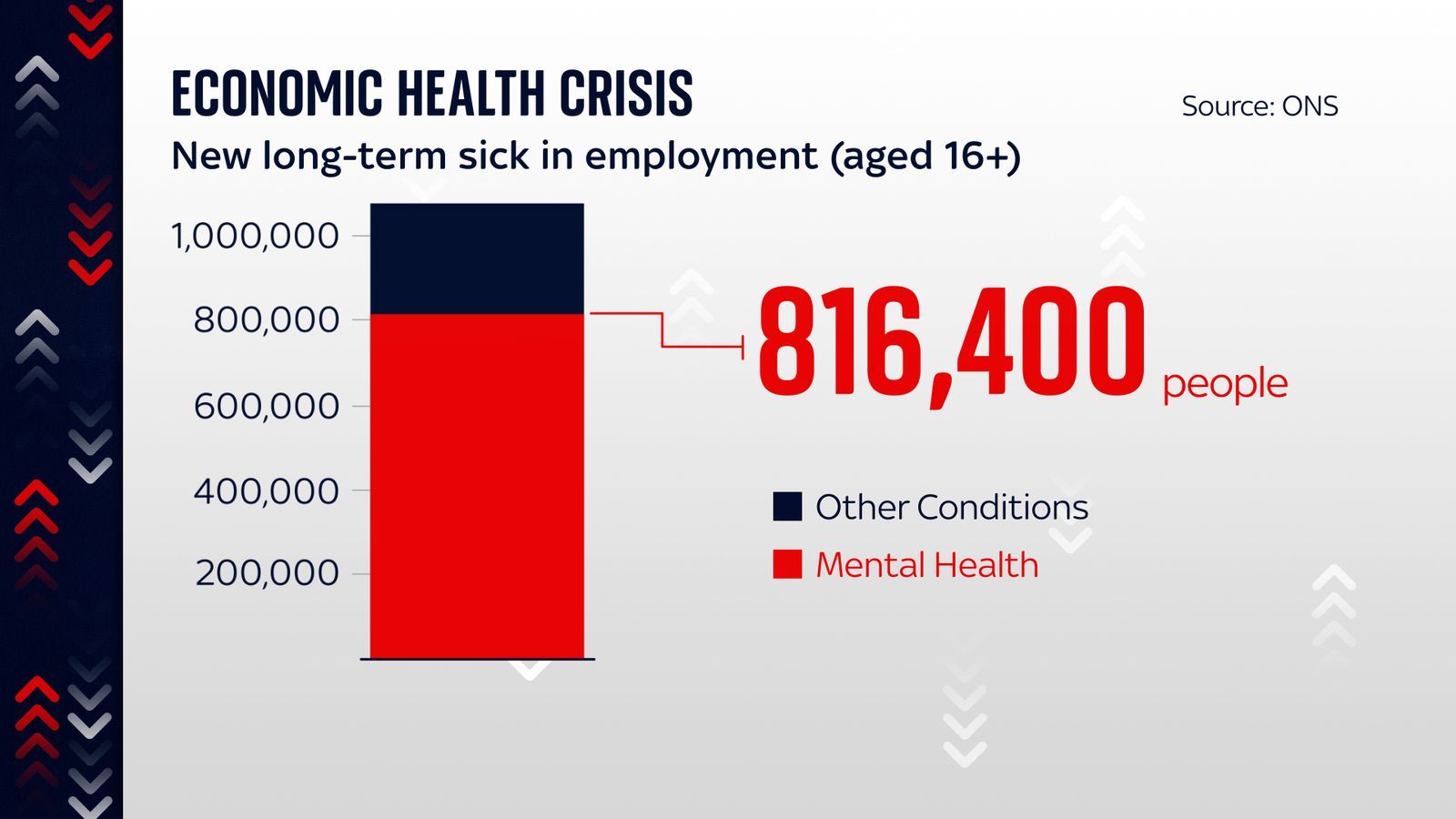 The number of employed people with long-term mental health conditions rose by 816,400

Britain's disability benefits bill has already reached £14.7 billion. Four-fifths of the rise in the number of disability benefits recipients over the past two decades has been driven by psychiatric conditions, such as mental health problems and learning disabilities.

Tom Waters, an economist at the Institute of Fiscal Studies, said: "If those trends continue, that's going to continue to put pressure on that expense, particularly at a time when the government is struggling to fill the deficit.

At 3.5%, Britain's unemployment rate is at a record low, but it belies worrying long-term trends that have been made worse by the pandemic.

A mental health epidemic is driving an increase in economic inactivity among the long-term sick. These people are not looking for work so they do not show up in the unemployment figures but the longer they remain out of work, the harder it will be for them to return.

A smaller workforce means there are fewer people to produce the goods and services that help the economy to grow.

It also increases competition for workers, bidding up wages at a time when inflation is running rampant.

The Bank of England has already asked workers to show "restraint" when asking for pay rises but, with competition rife, employers may have no choice but to fork out for workers.