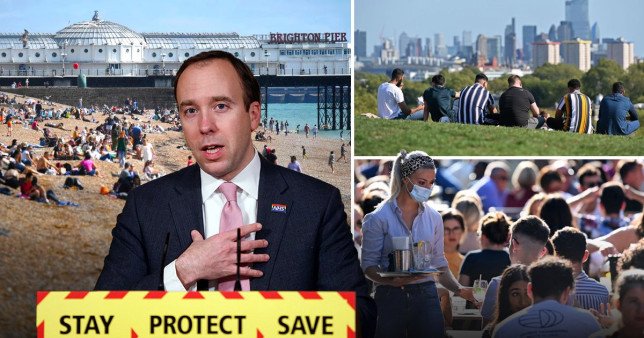 A leading medic also expects this summer to look a lot like last year.

The Health Secretary’s intervention comes as a leading medical figure predicted that summer 2021 is set to be ‘similar’ to last year in the UK.

Mr Hancock told BBC Politics East that there would be ‘a few tough few months between now and (summer)’, with many restrictions likely to be in place until the late spring.

But, he added: ‘In six months we’ll be in the middle, I hope, of a happy and free Great British summer. I have a high degree of confidence that by then the vast majority of adults will have been vaccinated – and that’s not just the clinically vulnerable groups, but all groups.’

It comes as Public Health England’s (PHE) Covid-19 strategic response director suggested the NHS will remain under pressure until March but said the impact of the vaccination roll out should start to be felt over the next two weeks.

Dr Susan Hopkins told the BBC’s Andrew Marr show: ‘I hope that this summer will be similar to last summer. I hope that we will be down to those sort of case numbers and that will allow us to be able to do things that feel more normal.

‘But I think that we need to be very cautious on that, we do not want to have another wave, as we have had this winter.


‘This has been a very difficult time for everyone… It is better to be cautious, let’s get the population vaccinated – that will have the biggest impact on reducing hospitalisations and reducing deaths.’

It comes after the Government announced quarantine hotels will be mandatory for all arrivals into the UK from countries on a ‘red list’, to avoid importing new strains of the virus.

However, there have been calls for the move to be extended to all countries – which would further dampen hopes of foreign summer holidays.

Last year, many Brits opted for domestic getaways to popular tourist destinations, while many social occasions moved outside as the weather improved.

However, large events were cancelled and many coronavirus restrictions remained in place, with measures like the ‘rule of six’ in force.


Dr Hopkins’ intervention comes amid warnings that social distancing may need to remain in place for the rest of the year.

She also warned that relaxing lockdown measures would have to be done ‘very slowly, very cautiously’ to avoid another surge in infections.

‘We have learnt, as we did on the first occasion, we have to relax things really quite slowly, so that if cases start to increase we can clamp down quite fast,’ Dr Hopkins cautioned.

‘The NHS is going to be under pressure until the end of March, as normal in winter, but even more so with the amount of inpatients they still have with Covid-19.

‘Any releases that we have will have to happen very slowly, very cautiously, watching and waiting as we go, with a two-week period to watch and see the impact of that relaxation because it takes that to see what’s happening in the population.’

On vaccinations, she the impact of the UK’s rollout should begin to be felt in a fortnight, adding that experts are hoping to see a quicker decrease in case rates among those who have been vaccinated, and therefore a drop in severe illness.

Dr Hopkins said: ‘We expect over the next two weeks to start seeing that impact of that vaccine in that age group, and also an impact on hospitalisation.’

On Sunday it emerged that researchers have told the Government that vaccinations need to be 85% effective to avoid another spike in cases and ease restrictions.

That could mean social distancing will need to remain in place for the rest of the year, scientists say.

Dr Hopkins also branded news that the Janssen and Novamax vaccines are effective against the variant identified in South Africa ‘reassuring’.

‘We clearly will need to study all of them in terms of looking at how they respond to the population in South Africa, where I know there are a number of studies going on at the moment.’