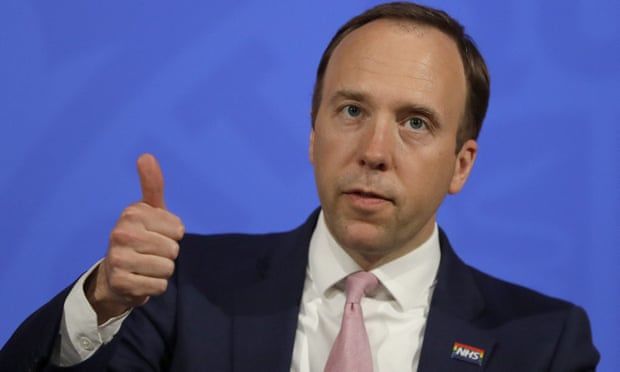 Matt Hancock has been “approached” about writing a book about his experience as health secretary during the coronavirus pandemic, his spokesperson has confirmed, provoking anger from campaigners and the Labour party.

The former minister, who stepped down in June after it was revealed he had broken Covid restrictions, had been contacted but no deal had been made, his spokesperson said.

Reports that Hancock was considering a lucrative book deal ahead of next year’s inquiry drew harsh condemnation from the opposition. Labour’s deputy leader, Angela Rayner, said the former health secretary was attempting to “put his spin on the government’s failures”.

She tweeted: “This is disgusting and an insult to each and every bereaved family. Boris Johnson needs to step in and block Matt Hancock from getting a bumper payday to put his spin on the government’s failures before we get the truth in a public inquiry.”

In a separate statement, a Labour spokesperson said: “The Cabinet Office should block the publication of this tasteless cashing in on tragedy.”

The Covid-19 Bereaved Families for Justice UK group also condemned Hancock as trying to cash in on the pandemic, which has resulted in more than 142,000 deaths in the UK, according to government figures.

“The fact that Matt Hancock thinks it’s appropriate for bereaved families to have to listen to his spin on their loved ones’ deaths, before the truth has come out via the inquiry, says it all about the attitude of the man who oversaw the worst UK public health failure ever,” the group, which has led the calls for an inquiry into the government’s handling of the coronavirus pandemic, wrote on Twitter.

The inquiry is likely to examine whether the government was quick enough to apply restrictions to protect the public from the virus and look at whether care homes were properly protected.

Hancock spoke about throwing a “protective ring” around care homes during the early stages of the pandemic in England but the country went on to record tens of thousands of care home deaths.

The Daily Mail first reported that the former minister was in talks with HarperCollins about writing an insider account of the government’s pandemic response, claiming the publisher could hand him an advance of £100,000.

Hancock confirmed reports that he had been approached, telling the newspaper that “no decisions have been made”.

His spokesperson similarly underlined on Saturday that, while an approach had been made, no deal had been signed: “Matt has been approached to write a book about his experiences in the pandemic, but no decisions have been made. There is no deal.”

And publisher HarperCollins said on Saturday evening it was not in talks with Hancock and had “no knowledge” of any book about his pandemic experience. “We have no knowledge of such a book and are not in talks,” it said in a tweet.

The Daily Mail reported that Hancock was “set to write a ‘How I Won the Covid War’ book on his ‘heroic’ role in the UK vaccine campaign”.

But responding to the claim, Hancock’s spokesperson said: “The people who were heroic during the pandemic were the NHS staff who worked round the clock to save lives.”

While the official government figures on Friday put the UK’s death toll at 142,678, separate statistics show that there have been 165,534 deaths where Covid is mentioned on the death certificate.