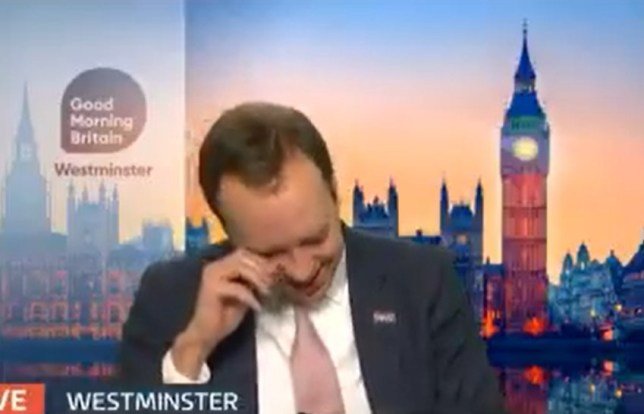 The health secretary has been accused of shedding ‘crocodile tears’ after becoming emotional on live television while watching Britain’s first patients receive the coronavirus vaccine.

Matt Hancock broke down this morning as he watched Margaret Keenan, 90, become the first person in the world to receive Pfizer’s jab, followed by 81-year-old William Shakespeare.

The minister appeared to wipe away tears as he looked down and smiled, before saying it had been ‘such a tough year for so many’, adding that the work that has gone into the ‘groundbreaking’ vaccine rollout makes him ‘really proud to be British’.

But many have taken to social media accusing the minister of staging an emotional performance, as they held him accountable for a string of failures during the pandemic.

Matt Hancock 'in tears' on GMB as Covid vaccines are administered


Palliative care doctor and writer, Rachel Clarke, shared the clip on Twitter and wrote: ‘I have witnessed too many genuine tears to count this year, @matthancock.

‘Counselled too many bereaved families. Cared for too many who died.

‘”We threw a protective ring around care homes,” you told us.

‘Words – as a palliative care doctor – I will never forgive or forget.’

Senior lecturer in occupational therapy, Sam Baker, said: ‘Nobody needs your insincere crocodile tears act @MattHancock. We needed you to look after the NHS and its staff which you have failed to do in a quite spectacular way.’

Following the interview, Mr Hancock told the Commons the rollout of a Covid-19 vaccine has been ’emotional for many of us’.

Agreeing with the shadow health secretary, Mr Hancock said: ‘We can all look forward to a much brighter 2021 and we must stick with it for now, but we can see the way through this.’

He added: ‘Overall, may I join (Mr Ashworth) in saying how wonderful it was to see the pictures on the TV this morning. It was emotional for many of us and I’m delighted that we’ve been able to make this progress.’

Body language expert Judi James gave her analysis of his emotional display this morning, telling Metro.co.uk: ‘It was not a particularly convincing display but he’s earned his moment of emotion so we probably should give him the benefit of the doubt’. 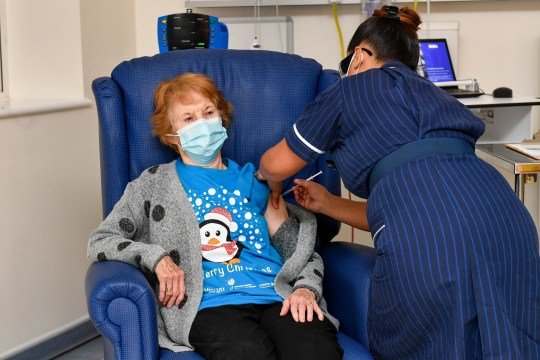 Margaret Keenan, 90, is the first patient in the United Kingdom to receive the Pfizer/BioNtech covid-19 vaccine at University Hospital, Coventry

‘Matt Hancock appears to have no facial puckering or crumpling here,’ she added. ‘His smile as he cries might appear odd but he is going for the “tears of joy” look so the smile and brief laughs would be appropriate.

‘He looks down to wipe one eye only: his right eye with his right hand, and he drops his head as he does so. When he raises his head he stops wiping but keeps his eyes shut in a cut-off ritual.

‘When he opens them there appears to be no sign of actual wet tears here, although he does use a couple of breathless-sounding half-pants/half-laughs to stress the theme of happy crying.’

The expert added: ‘I suspect the dry-looking eyes are the thing that has drawn out the doubtful comments, although if he’d sucked in his lips while he was dabbing people might have been more convinced.’

The health secretary, who has dubbed today ‘V-Day’, said several times this morning during live interviews that he felt ’emotional’ looking at pictures of Margaret make history by receiving the vaccine in Coventry at 6.31am.

But it wasn’t until he watched William explain how the jab will ‘change lives’ that Mr Hancock became visibly overwhelmed.

He told Piers Morgan: ‘It’s been such a tough year for so many people and there’s William Shakespeare putting it so simply for everybody that we can get on with our lives.

‘There’s still a few months to go. I’ve still got this worry we can’t blow it now, Piers. We’ve still got to get the vaccine to millions of people and so we’ve got to keep sticking by the rules.’

Despite the huge step forward, the majority of the population will not receive the vaccine just yet, with over-80s on the priority list, along with care home residents and staff.

GPs are also expected to be able to begin vaccinating care home residents from today. Any appointments not used for these groups will be used for healthcare workers who are at highest risk of serious illness from Covid-19.

Mr Hancock’s comments came just weeks after Mr Morgan launched a blistering attack on the health secretary and demanded to know why he had not handed in his resignation over a ‘constant series of failings’ during the pandemic.

Following the Government’s 202-day boycott of appearing on the show, the ITV presenter grilled Mr Hancock on a ‘charge sheet’ of failures, including the care home crisis, the delay to implement a national lockdown, the decision to keep borders open and the ‘complete shambles’ of test and trace.