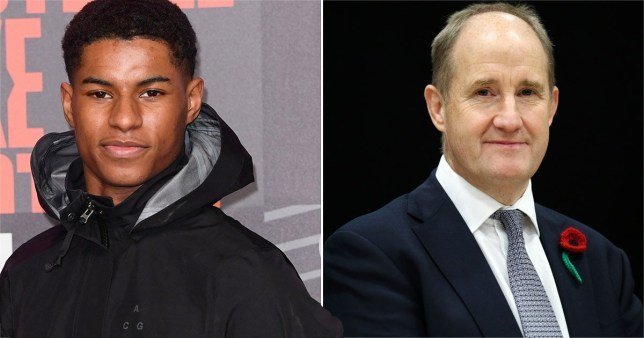 The footballer said he hadn't met 'one parent who hasn't wanted or felt the responsibility to feed their children'.

Footballer Marcus Rashford has hit out at a Tory MP for his comments on child hunger in the UK. MP Kevin Hollinrake had shared his praise for the government’s Eat Out to Help Out scheme on Twitter, in which he described it as an ‘extraordinary success’. He was then asked by another Twitter user why Rashford was forced to intervene before the government pledged to provide free school meal vouchers to children during the summer.

Replying to the comment, Hollinrake wrote: ‘Where they can, it’s a parent’s job to feed their children.’ Rashford, who plays for Manchester United, then explained that the MP’s words could prevent families from seeking the help they need.

Writing online, he said: ‘I would urge you to talk to families before tweeting. To this day I haven’t met one parent who hasn’t wanted or felt the responsibility to feed their children.

‘Put to the side that this comment came from an MP. It’s comments like this that prevent people from speaking their truth and asking for help. We need to start uplifting each other.’

Hollinrake only responded to Rashford’s tweets to say: ‘Very happy to debate this with you in any open forum.’

Hollinrake said it was the parents’ job to feed their children

Rashford successfully campaigned for the government to continue free school meal vouchers into the summer holidays earlier this year. Downing Street had previously rejected his requests, before Boris Johnson made a u-turn and announced a new £120,000,000 ‘covid summer food fund’ 24 hours later.

The England striker also raised more than £20,000,000 to supply millions of meals to vulnerable families during the coronavirus lockdown in partnership with charity FareShare UK.

In an open letter to MPs, Rashford described watching a nine-year-old boy ‘keeping it together whilst his mother sobbed alongside him, feeling like he has to step up to protect his family and alleviate some of that worry’.

He went on: ‘I know that feeling. I remember the sound of my mum crying herself to sleep to this day, having worked a 14-hour shift, unsure how she was going to make ends meet. That was my reality.’