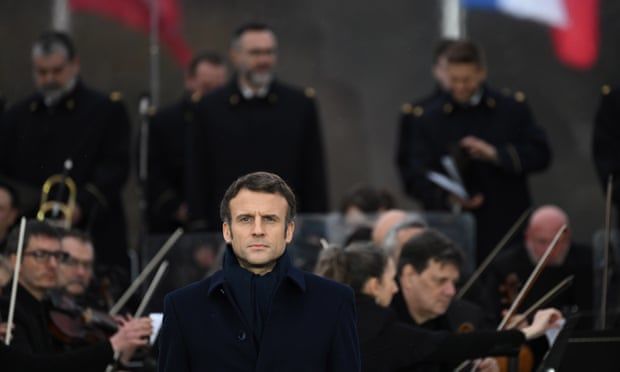 Emmanuel Macron has condemned Boris Johnson’s government for making Ukrainian refugees unwelcome in Britain and for pretending to lead the world in helping the victims of the war.

Speaking at the end of an EU summit in Versailles, the French president was eviscerating about Boris Johnson’s approach towards those fleeing Russia’s bombs.

He said that by insisting that visa applications to the UK must be made in person in Brussels and Paris, the British government had imposed additional misery on desperate men, women and children.

Macron accused the British government of failing to live up to its “grand statements”. “I would hope that the Ukrainian men and women who have lived through horror and crossed Europe to reach their families on UK territory will be better treated,” he said.

The searing criticism of the British prime minister came as Russian airstrikes hit three more cities in Ukraine on Friday and tanks and artillery moved to what appeared to be firing positions to the north-west of the capital, Kyiv. Across the country, Ukrainian civilians are being shelled as they seek to flee besieged cities, in what is now the fasting-growing refugee crisis in Europe since the second world war.

In a Versailles declaration on Friday the EU said it would “offer temporary protection to all war refugees from Ukraine”, with the UK almost alone in Europe in insisting that even those with relatives in Britain must apply for visas. The home secretary, Priti Patel, had claimed until Thursday that stringent in-person security checks at application centres were also needed to stop Russian agents or terrorists smuggling themselves into the UK.

Under heavy pressure from MPs across the Commons, Patel reversed her policy on Thursday, announcing that online applications could be made from next Tuesday. But Macron said more had to be done by the British government, with already more than 2 million people having fled Ukraine and millions more expected.

He said: “I welcome the British shift, which shows there was a problem, despite what was being said at the time. I think nobody would have understood that despite all the grand statements we share that the British government continued to apply current rules that meant they did not welcome Ukrainian refugees who wanted to reach British soil saying they have to travel hundreds of kilometres in order to apply for a visa.

“It’s a glimmer of pragmatism that they’re starting to align themselves with their own statements, which is a step in the right direction, although much remains to be done. I think the French home affairs minister’s letter was a helpful one [Gérald Darmanin wrote to Patel at the weekend urging her to set up UK consular services in Calais].

“Obviously we will do what we can and we are trying to cut back on the red tape so they can reach more dignified living conditions. I would like to thank the UK government for for this first step and we will over the coming day see whether it is enough or whether more effective measures are required.”

The UK has so far only granted 957 visas out of at least 22,000 applications in progress. The policy of in-person applications caused chaos in Calais earlier this week as Patel had falsely claimed that a visa centre had been opened.

Refugees who had travelled 1,400 miles (2,250km) to the Channel were welcomed by UK government posters informing them they needed to go to Paris or Brussels to make their applications. A minister later clarified that the application centre in Calais was in the process of being established, prompting calls for Patel’s resignation by the Tory MP Roger Gale for misleading the House of Commons.

The UK’s Ukraine family scheme allows Ukrainian family members of British nationals to stay in Britain on successful completion of a visa application. Refugees who can find a private sponsor or local authority willing to provide housing and integration support can also come for an initial period of 12 months.

In contrast, under the EU’s policy all Ukrainian refugees have the right to live and work in the bloc for at least a year and potentially up to three years. Ukrainian citizens already have 90-day visa free access to the EU.

The European Commission president, Ursula von der Leyen, told reporters in Versailles: “Indeed we welcome this improvement for the Ukrainian refugees, this is a good step in the absolute right direction.

“As you know we in the European Union already a week ago activated the temporary protection directive for the very first time in the history of the EU, which gives all Ukrainians immediate residency rights, access to the labour market, to schools, to medical care, to other support, so that these poor people can find a home and be accommodated in the European Union.”