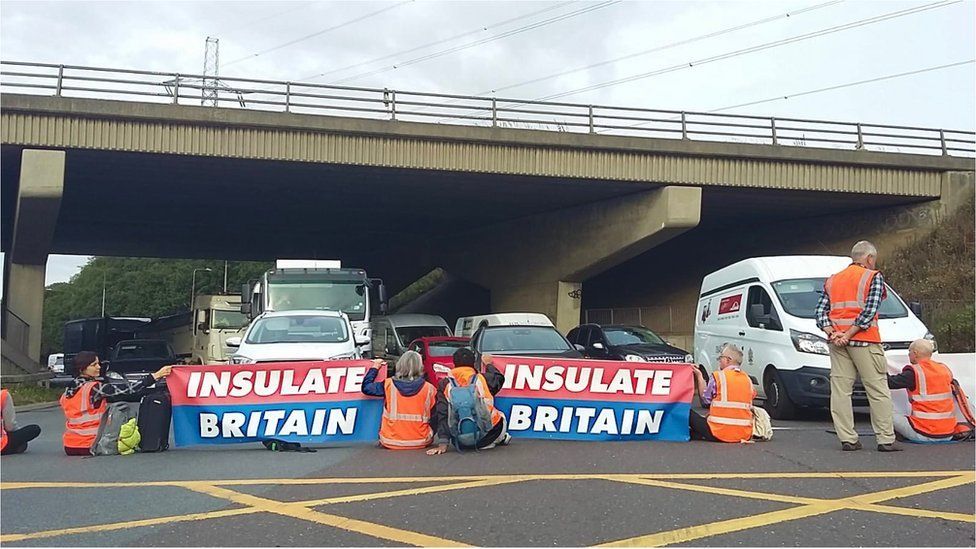 There were protests at junctions 20 for Kings Langley, Herts, 14 for Heathrow terminal four, three for Swanley in Kent, six for Godstone, Surrey and 31 for Lakeside, Essex.

They have since been reopened but police said 42 people were arrested.

A government spokeswoman condemned the protests and said it was supporting people to install energy efficiency measures in their homes.

Hertfordshire Police said 18 people were arrested after officers were called to a protest near junction 20 at about 08:00 BST.

Supt Adam Willmot said: "Protesters ignored police requests to move location, so we took robust action to enable roads to be reopened and to remove the protesters causing obstructions."

The force closed the slip roads in both directions, which led to "congestion and delays on both the M25 and the A41", but the closures had lifted by 10:20 BST. 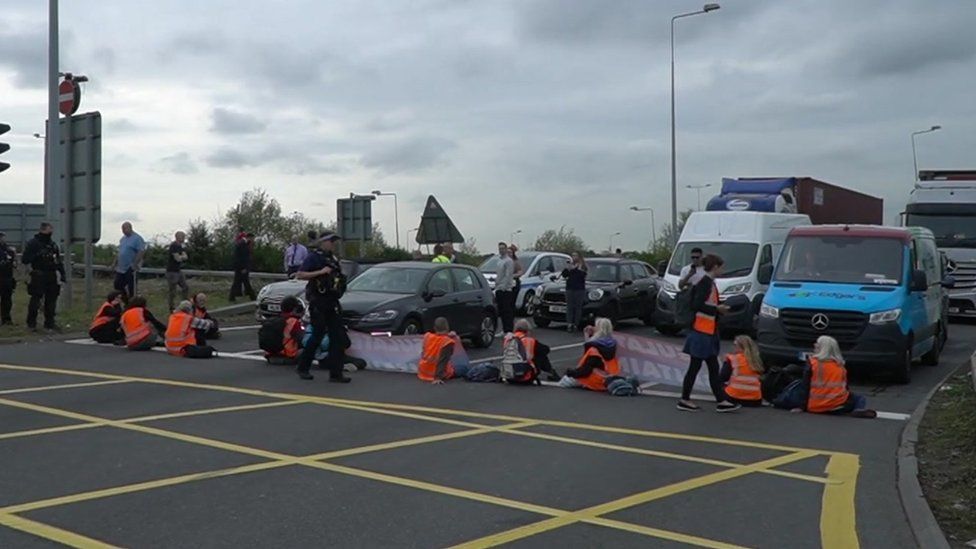 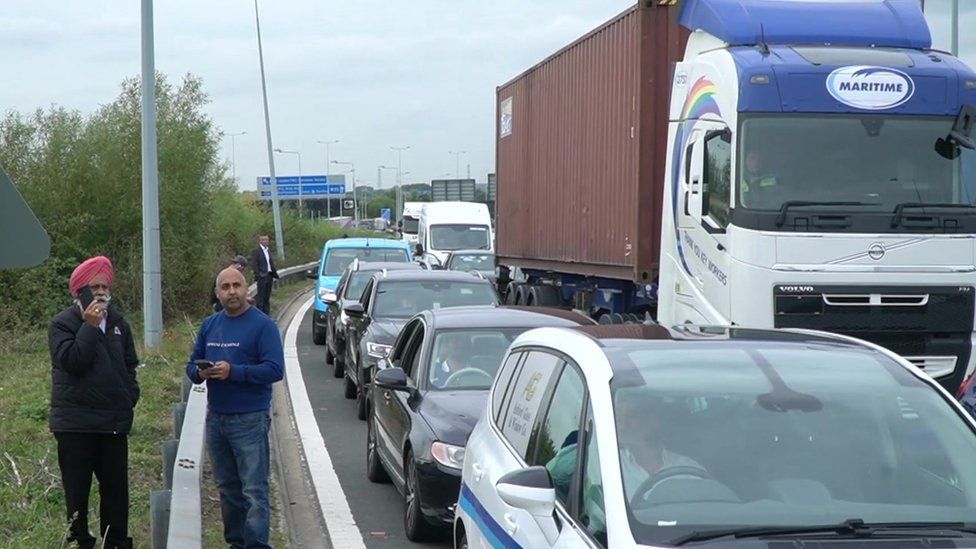 It said officers worked to resolve the situation "quickly and safely", which included shutting the slip road temporarily. 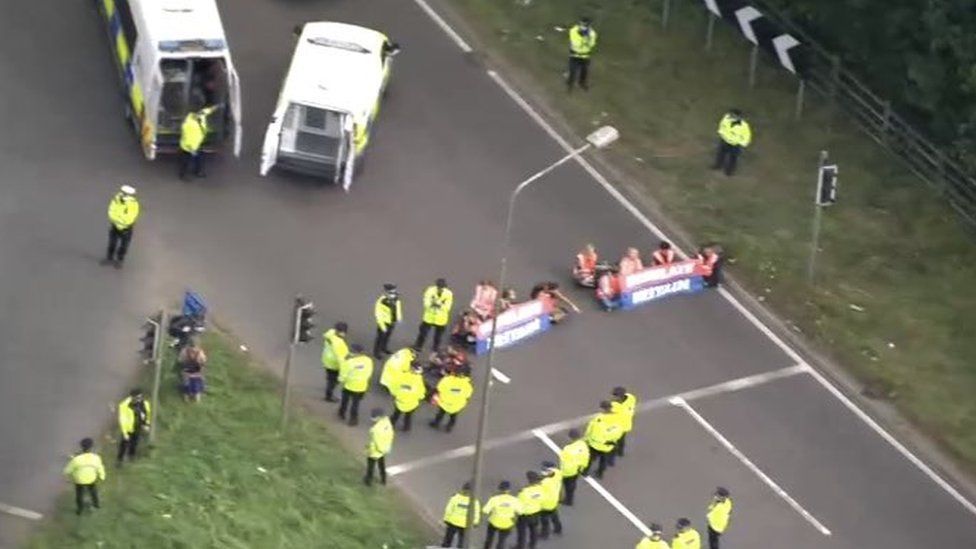 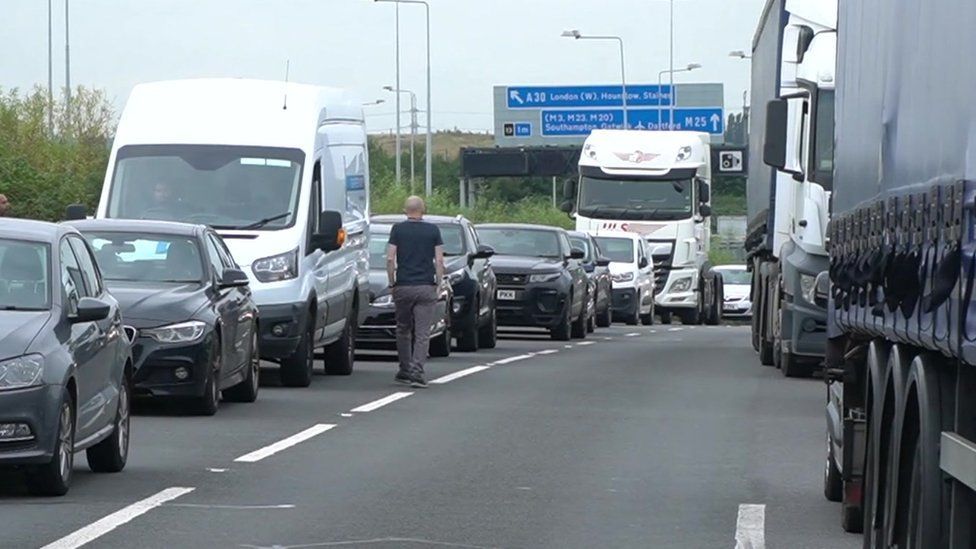 It said it was called at 08:10 BST to a group of people obstructing the roundabout.

Surrey Police said it was called just before 08:00 BST to a protest at junction six, where the slip road had been closed with a diversion set up.

It tweeted that a number of people had been arrested following protests at junctions six and 14.

Earlier, the exit slip road to Heathrow terminal four had been closed.

Some drivers were frustrated with the delays but others tweeted their support. 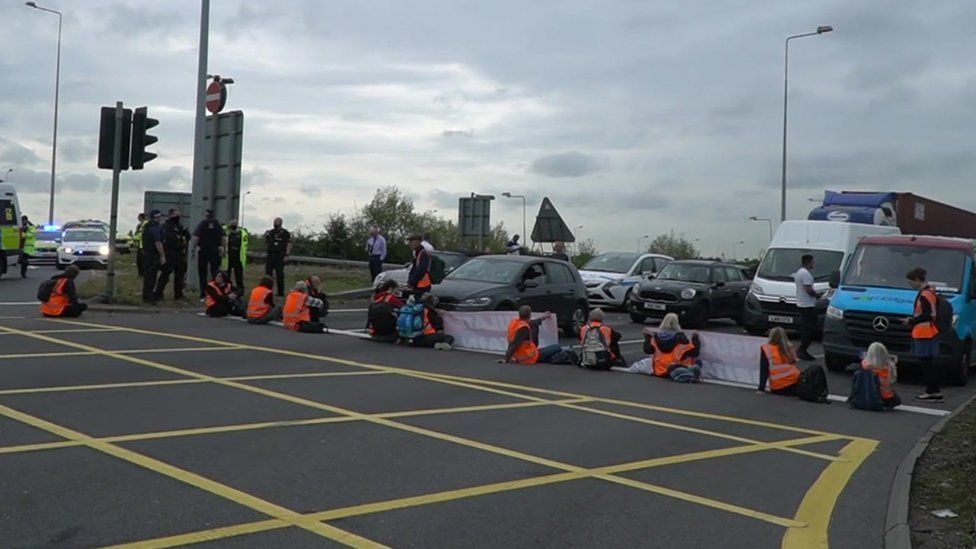 Clive Farnham from Crawley tweeted that they should "have a protest on the side of the road " and "allow others to go about their business", while Laura asked the group if they had "thought about the pollution you are causing to the environment with the tailbacks of 15/20 miles on several sections of the m25 which makes it all a joke".

Green Party member, Matt Hill, thanked the protesters and tweeted that while he was "frustrated and concerned" that his son was late for college, he was "nowhere near as concerned as I am for his future if we don't act urgently to address our climate emergency".

In a statement on its website, Insulate Britain said that Monday's disruption was "just the start".

"Actions will continue until the government makes a meaningful commitment to insulate Britain's 29 million leaky homes, some of the oldest and most energy inefficient in Europe," it said.

It added that its demands were delivered by hand to 10 Downing Street on 21 August, but so far no-one in government had responded.

Zoe Cohen from Insulate Britain told BBC Radio 5 Live: "We regret having to do this but we really have no other option. They're a group of ordinary people who've come together and put their bodies on the line.

"They're doing this because they're desperate for meaningful action from the government, and insulating our homes is the most efficient way to reduce our emissions and avoid climate catastrophe."

Supporter Liam Norton, 36, from London, said he was "shocked at the lack of significant action" from the government.

"It's a no-brainer. Insulating Britain will reduce emissions, provide hundreds of thousands of jobs and stop our elderly dying in cold homes each winter," he said.

"So stop messing about, Boris, and get on with the job.

"As soon as a statement is made that we can trust and is meaningful, we will get off the roads."

A government spokeswoman said: "People's day-to-day lives should not be disrupted, especially on busy motorways where lives are put at risk and resulting traffic delays will only add to vehicle emissions.

"We are investing £1.3bn this year alone to support people to install energy efficiency measures, and our upcoming Heat and Buildings Strategy will set out how we decarbonise the nation's homes in a way that is fair, practical and affordable."

The protesters say their goal is to raise the profile of insulation as an issue. They say it's absolutely central to tackling carbon emissions. There's definitely truth in that - heating our homes is a big component of personal carbon emissions.

The AA say this is dangerous: they're blocking the road and could cause disruption to emergency vehicles. They say this backfires because it creates more delays and vehicles stuck in traffic create more emissions, so this is a "lose" for the protesters.

The protesters say how else do you raise issues like insulation - get you and me talking about them - without these kinds of protests? It's a really interesting dilemma and an interesting evolution of direct action around climate.

Do they stop at motorways? Where else are they going to go - and what other single-issue direct action protest groups might we see form?