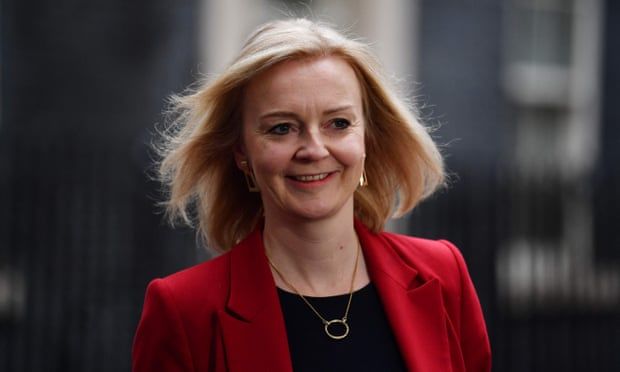 The foreign secretary, Liz Truss, is to take over responsibility for the UK’s relationship with the EU after the Brexit minister David Frost’s resignation, Downing Street has said.

She will be adding ministerial responsibility to her foreign portfolio with immediate effect.

This means taking over Lord Frost’s key positions on all the post-Brexit committees, including as co-chair of the partnership council and the joint committee that oversees the implementation and enforcement of both the withdrawal agreement of 2020 and the trade and cooperation deal clinched last December.

Her appointment will be seen as a steadying move after Frost’s resignation dealt a body blow to an already weakened prime minister, reeling from sleaze scandals and the loss of the byelection in North Shropshire on Friday.

Frost, who has led negotiations with the EU, handed in his resignation letter to Boris Johnson last week and had been persuaded to stay on until January – until the news was leaked on Sunday.

In his letter of resignation, Frost said it was the introduction of plan B coronavirus measures, including the implementation of Covid passes, that prompted his decision. He also said he had become disillusioned by tax rises and the cost of net zero policies.

Her immediate task will be to decide whether this is a reset moment for the UK’s severely strained relationship with the EU or whether she will continue with Frost’s approach over the Northern Ireland protocol, something that has put the UK on a collision course with Brussels and Washington.

Speculation was rife that Frost resigned after a briefing organised by the Foreign, Commonwealth and Development Office nine days ago in which European journalists were told that the UK was retreating from its hardline approach.

While fiercely loyal to Johnson, Truss is considered a frontrunner along with the chancellor, Rishi Sunak, to succeed him in a future leadership challenge. She also commands the support of the hardline Eurosceptics, known as the “spartans” in the party, famed for her libertarian views and her war on “woke” culture.

In a recent poll by Conservative Home she ranked No 1 in popularity in “satisfaction ratings”, ahead of the defence secretary, Ben Wallace, Frost, Jacob Rees-Mogg and Sunak.

A major speech a week ago underlined the former remainer’s Brexit credentials, extolling the virtues of a post-Brexit “confident, outward-looking, patriotic and positive” Britain.

Allies of Sunak have long been suspicious of No 10’s treatment of Truss, suspecting that she was set up as a rival to the chancellor in order to clip his wings. “Clearly she plans to bash her way to the final two [in a leadership contest] then allow a Trumpian base to carry her into No 10,” one supporter told the Observer recently.

Her new role as the lead negotiator will be a test of her political abilities on a well-lit domestic stage.

The complexity of the relationship with the EU and the fragility of Northern Ireland will be demanding, seen as opportunities but also potential booby traps.

Unlike Frost, Truss is an elected member of cabinet and has served under prime ministers David Cameron, Theresa May and Johnson, as a minister of state for environment, food and rural affairs, chief secretary to the Treasury, international trade secretary and foreign secretary after the recent cabinet reshuffle, replacing Dominic Raab.

“I look forward to working with her now on Brexit. Much work ahead but progress is achievable in the new year.”

Downing Street also announced that Chris Heaton-Harris would become minister of state for Europe and would deputise for the foreign secretary as necessary on Brexit and the protocol.

Moving the role of Brexit negotiator to the Foreign Office will be seen as a wise move by some critics of Frost who felt too much power was held in one individual’s hands.

“This will need more than simply replacing Frost. Johnson should take this opportunity to end the anomaly that the minister responsible for relations with our nearest neighbours operates as a lone ranger in the Cabinet Office,” the crossbench peer Lord Ricketts, a former undersecretary at the Foreign Office and ambassador to France, said on Sunday.

“He should give the Foreign, Commonwealth and Development Office responsibility for EU policy, where it can be properly integrated into wider foreign policy under a senior minister for Europe.”