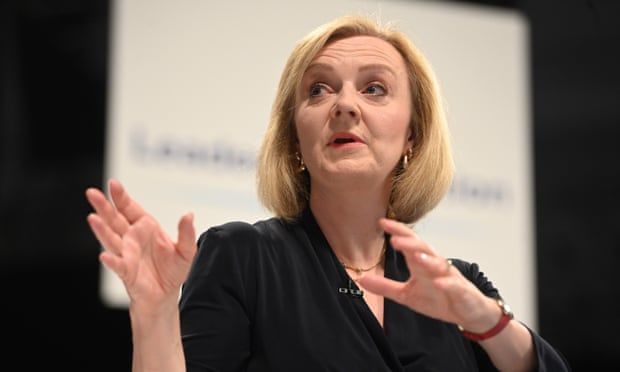 Analysis of tax proposals shows a full-time employee on national minimum wage would gain £1 a week
Liz Truss’s “insulting” plans to help people with their energy bills would give the lowest paid just £1 a week when their costs will rise by an estimated £57, Labour has said.

Rachel Reeves, the shadow chancellor, said Truss’s plans were not only uncosted but woefully inadequate, adding that reversing the national insurance rise would give those on the national minimum wage an estimated £1 a week – enough to cover just 3% of the increase in energy bills.

In recent days, Truss has softened on the subject of giving people direct help to cover rising bills but has sounded firmly opposed to so-called “handouts” at other times, saying cutting taxes are the answer. The foreign secretary has also said she would remove “green levies” from bills, which cost on average £3 a week.

Boris Johnson said on Friday the current package giving people £400 as an energy grant, and up to £650 for 8 million of the most vulnerable, was not enough in the face of further rises due in October and again next year.

Amid forecasts that energy bills could hit £5,000 a year by next April, the prime minister made clear that he expected his successor to act.

Asked if the current package was enough, Johnson said: “No, because what I’m saying we’re doing in addition is trying to make sure that by October, by January, there is further support, and what the government will be doing, whoever is the prime minister, is making sure there is extra cash to help people.”

Rishi Sunak, Truss’s rival in the Conservative leadership content, has set out plans for a £10bn support package to help people with their energy bills, saying he would be prepared to borrow to do so.

But new analysis by the Tony Blair Institute said Sunak’s plan to cut VAT on fuel would only amount to a saving of about £14 a month for the typical household.

Keir Starmer, the Labour leader, has faced criticism in recent days for failing to present Labour’s policy on energy, with the former prime minister Gordon Brown suggesting temporary nationalisation to get through the crisis. Starmer is expected to set out a fully costed Labour plan for energy on Monday.

Labour’s analysis of Truss’s tax proposals shows that an employee working full-time on the national minimum wage will gain only £1 a week as a result of changes to national insurance. On Friday Reeves said: “Liz Truss’ uncosted tax plan will only give workers on the national minimum wage an insulting £1 of additional support while their weekly energy costs are increasing by £57 a week.

“The minimum wage is already not enough to live on and this further lack of support for working people from the Conservatives risks plunging the lowest paid workers into real financial hardship.

“A Labour government would act now to cut bills by taxing the huge profits made by the oil and gas producers, bringing down energy bills for good with a green energy sprint for homegrown power, and bringing forward a 10-year warm homes plan to cut bills for 19 million families living in cold, draughty homes.”

Thérèse Coffey, the work and pensions secretary and one of Truss’s key allies, said on Friday that the cost of bills would be “nowhere near” the levels predicted by independent analysts.

Defending Truss, Coffey said: “She is absolutely an MP who knows what it is like for struggling households and that is why, quite rightly in a considered way, once Ofgem comes up with their price cap … all of government … and it will be a decision for the new prime minister to enact what changes could be made.”

A spokesperson for Sunak’s campaign said on Friday that Truss had “blown a further £5bn black hole in her plans” by not backing the windfall tax. However, the Truss campaign later clarified that she was not scrapping the current windfall tax, despite being against them in principle as a “Labour idea”.
#Boris Johnson  #Johnson
Add Comment