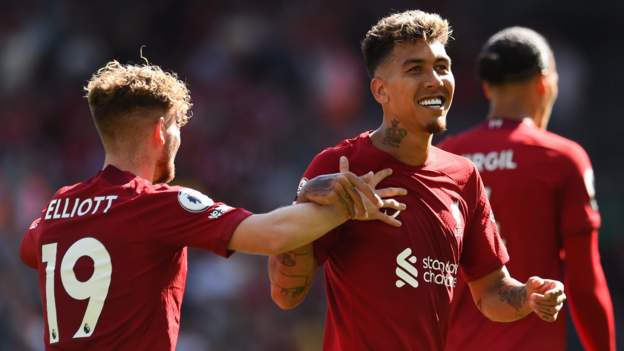 Liverpool equalled the biggest victory in Premier League history as they kick-started their season in spectacular fashion by thrashing newly promoted Bournemouth at Anfield.

Manager Jurgen Klopp had described the beginning to his side's campaign as a "false start" after two draws and Monday night's defeat at Manchester United, but the Reds responded in emphatic fashion.

Manchester United have achieved this margin of victory twice - against Ipswich in 1995 and Southampton last year - while Leicester City did likewise against the Saints in 2019.

Liverpool got off to the perfect start as two goals in the opening five minutes against the Cherries set a raucous Anfield rocking.

Luis Diaz rose to powerfully head home the opener and the impressive Harvey Elliott curled in his first top-flight goal with a sublime strike from outside the box.

Full-back Trent Alexander-Arnold thumped a long-range shot into the top corner, with all three goals assisted by Roberto Firmino.

The Brazil forward went from provider to scorer on the half-hour mark when he acrobatically converted from inside the six-yard box and Virgil van Dijk headed in the fifth from a corner - all before half-time.

It went from bad to worse for Scott Parker's men in the first minute of the second half when Chris Mepham stretched to divert the ball into his own net and Firmino poked home the seventh of the afternoon after a fortunate deflection.

For Bournemouth, the rout was their third consecutive league defeat without scoring a goal after beating Aston Villa in their opening game. 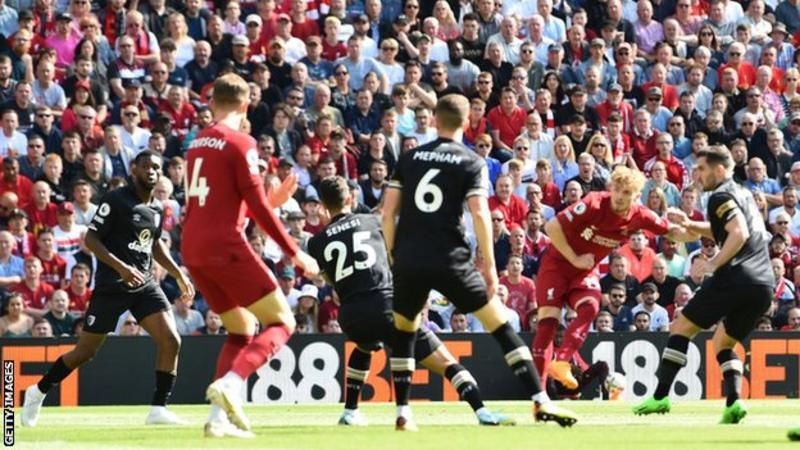 It had been suggested Liverpool have looked lethargic - and that they are missing forward Sadio Mane, now at Bayern Munich - after failing to win any of their opening three games.

Draws against Fulham and Crystal Palace being followed by a sluggish showing in the 2-1 defeat at Old Trafford at the start of the week led to questions being raised about the title credentials of a Reds side that ended last season on low points in the league and Champions League.

An extensive injury list - notably in midfield - and big summer signing Darwin Nunez being suspended has not helped, but Liverpool responded to the doubters with a breathtaking showing to which the visitors had no reply.

The Reds had a total of 19 shots at goal, 12 of which were on target - with a record-equalling nine ending up in the back of the net.

It was the first time they had racked up that number since 1989, when they did so against Crystal Palace in the old First Division.

Klopp's side had conceded the first goal in their last seven Premier League games but Diaz set them on their way after just two minutes with a sweet header.

The goal will have relieved some tension for what would have been a nervous crowd after the side's modest start to the season.

Teenager Elliott has featured in all four league games this season and opened his league account for the Reds with a delightful curling effort into the bottom corner before Alexander-Arnold smashed into the corner from outside the box. 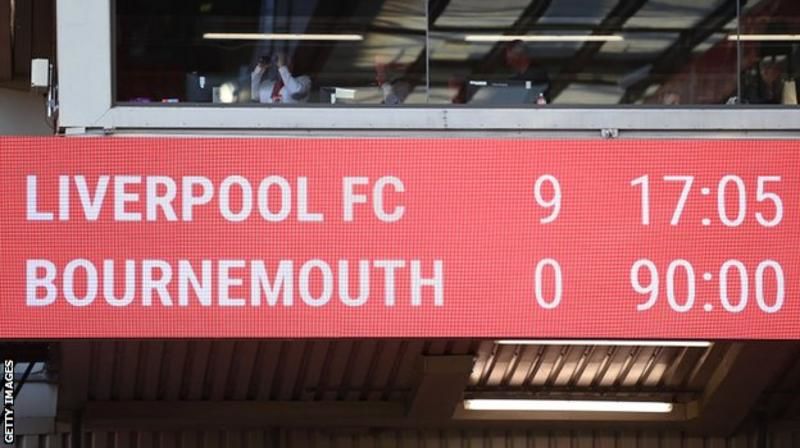 Firmino ended a barren run of 20 league games with a league goal at Anfield with an opportunistic strike, while Van Dijk shrugged off a difficult game at Manchester United by heading in the fifth.

Chris Mepham's own goal, Firmino's second and Carvalho's first for the club made it a perfect afternoon for the Reds as they narrowly missed out on claiming the Premier League's biggest victory.

Liverpool should really have hit double figures in a completely one-side game as Mohamed Salah endured a rare off day in a game in which his team-mates were ruthless.

The Egypt forward missed an open net from a couple of yards out then had a shot tipped over by Mark Travers before blazing over from close range. Left-back Andrew Robertson also headed over from in front of goal.

The emphatic win maintained Liverpool's dominant run over sides promoted from the Championship, and they have now lost just one of 34 meetings against newly promoted teams.

Cherries both goal-shy and leaky

Bournemouth had enjoyed a pleasant initial return to the Premier League when they beat Aston Villa on the opening weekend, but it has proved to be a false dawn and the remainder of August has been miserable.

The south coast side were hammered 4-0 by champions Manchester City, lost 3-0 at home to Arsenal and totally capitulated after conceding twice in the opening five minutes at Anfield.

Parker's men have conceded the most goals in the top flight this season (16) and at the other end have netted just twice.

Their total of 21 shots from their opening four games is the second fewest since Sunderland had 20 in 2012-13.

Home goalkeeper Alisson had a comfortable afternoon in the Merseyside sun, plucking a weak Kieffer Moore header out of the air being the most that he was stretched all game.