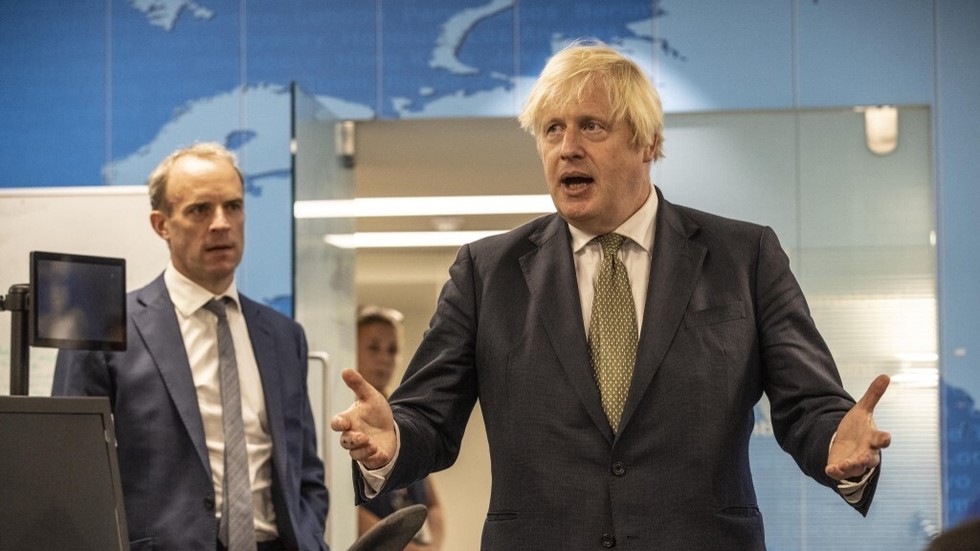 British Prime Minister Boris Johnson is no stranger to gaffes, but an awkward and “shockingly blasé” appearance at a crisis centre managing Afghan evacuees has invited comparisons to the satirical series ‘The Thick of It.’

Johnson and Foreign Secretary Dominic Raab visited the Foregn Office crisis centre on Friday, with BBC’s ‘Newsnight’ broadcasting clips from the visit later that night. From the outset, Johnson turned up the cringe factor, greeting staff with a cheery “what’s happening?” and bumping elbows, even though nobody in the room was wearing face masks, and all were likely fully vaccinated against Covid-19.

The visit, however, came just a day after a suicide bomber killed more than 150 people, including two British nationals, at Hamid Karzai International Airport in the Afghan capital of Kabul, and as the final British evacuation flights were gearing up to leave the airport, carrying a cohort of Brits and Afghan refugees.

“Are you the guys who have been inundated with all the emails from everywhere in the world saying, ‘please help my son, brother, get out of Afghanistan?” he asked the crisis workers, before asking them whether the crowd of Afghans at the airport had “thinned out yet” due to the bombing.

“I thought it was extraordinary that they all stayed [after the bombing],” Raab responded.

Johnson’s visit drew some heavy criticism online, with many commenters slamming his “flippant” and “shockingly blasé” demeanor at a time of crisis.

“These flippant remarks show Boris Johnson in his true light, uncaring and unable to master the detail during this awful crisis,” Liberal Democrat leader Ed Davey told the Independent.

Others compared Boris’ “photo op” at the crisis centre to ‘The Thick of It,’ a satirical mockumentary series spoofing the inner workings of the British government. Johnson was unfavourably compared to Peter Mannion, a blundering MP in the show.

With the clip still generating outrage and mockery on Saturday, the UK’s evacuation effort in Kabul drew to a close. The last civilian-only flight departed on Saturday evening, and any remaining flights will bring British troops and some Afghans to the UK. Altogether, the British operation has airlifted some 14,000 people out of Kabul in the past two weeks.