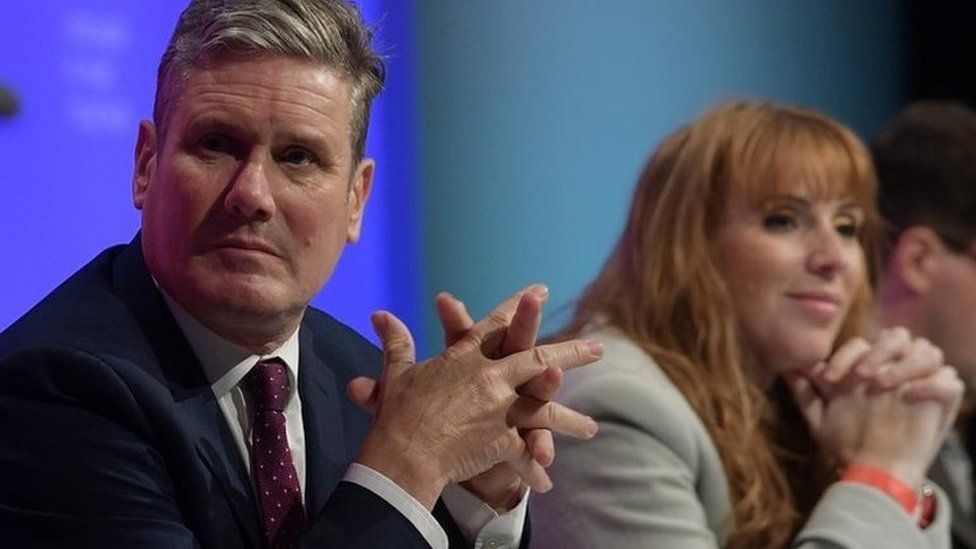 Labour leader Sir Keir Starmer and his deputy Angela Rayner have received police questionnaires as part of an inquiry into alleged Covid rule-breaking.

They both attended a gathering in Durham on 30 April last year, at which people drank beer and ate curry.

Durham Constabulary initially decided against an investigation, but opted last month to go ahead with one.

The Labour leader was seen on camera as he drank a bottle of beer while in the constituency office of City of Durham MP Mary Foy.

Both Sir Keir and his deputy have said they will resign if they are fined for breaching Covid rules.

At the time of the Durham gathering, in the run-up to the Hartlepool by-election on 6 May, social distancing rules were in place, including a ban on indoor mixing between households.

There was an exemption for work purposes, but the rules did not mention socialising at work - and there was also an exemption if "the gathering is reasonably necessary for the purposes of campaigning in an election".

Labour has said it has evidence showing it was a work event, and that Sir Keir was eating "between work demands".

Durham Constabulary initially decided that no offence had occurred, but amid calls for the police to re-examine the incident, the force announced an investigation saying it had since received "significant new information".

It came amid the fallout from the Metropolitan Police investigation into several parties in Downing Street and Whitehall during coronavirus restrictions.

That probe led to a total of 126 fines to 83 people, for events happening across eight different dates, including to Prime Minister Boris Johnson, his wife Carrie Johnson and the Chancellor Rishi Sunak.

Mr Johnson has apologised but refused to resign over the fine. On Tuesday his standards adviser has called on him to explain why he thought his actions did not breach the ministerial code.

The prime minister is facing continued pressure following the publishing of senior civil servant Sue Gray's report into lockdown busting parties at the heart of government, with several of his own MPs submitting letters of no confidence in him.

Watch: If I get Covid fine, I will go - Starmer says he'll step down as leader
#Boris Johnson  #Coronavirus  #Johnson  #Covid
Add Comment