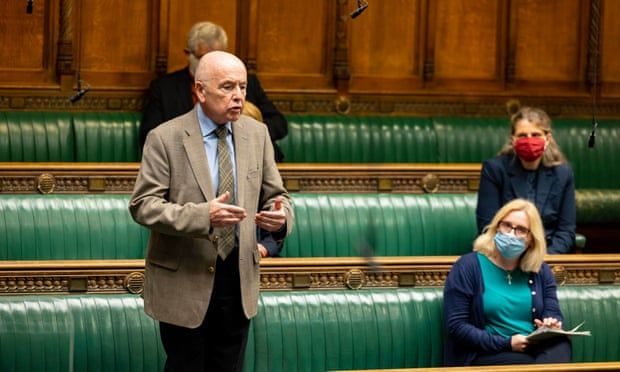 In March last year the Cabinet Office published what is known as a procurement policy note, which said that given the emergency, “in exceptional circumstances, authorities may need to procure goods, services and works with extreme urgency and without competition”.

But in a letter to the Crown Commercial Service, the arm of the Cabinet Office which leads on policy connected to purchasing and associated areas, Labour queried why the instruction had yet to be rescinded.

Writing to Simon Tse, the chief executive of the Crown Commercial Service, Jack Dromey, the shadow paymaster general, said that while there had been a reason to introduce the procedures at the peak of the emergency, they brought a risk of conflicts of interest and unsuitable suppliers being used.

The issue has been highlighted in recent weeks by coverage of the lobbying and outside commercial work of some MPs, such as Owen Paterson.

The healthcare company Randox paid Paterson – who has now resigned as a Tory backbencher – £100,000 a year as a consultant. The group was awarded hundreds of millions of pounds in contracts for Covid testing without any competitive bidding.

This week, the government said it had lost a formal note about a meeting between former health minister James Bethell, Paterson and Randox. In August it emerged Bethell had replaced his mobile phone before it could be searched for information relevant to how £85m of deals for personal protective equipment (PPE) and tests were allocated at the height of the pandemic.

Other controversies about the way contracts were awarded include the use of a “VIP channel” for well-connected people to try to secure PPE contracts, and the awarding of a £30m contract to produce test tubes to a former publican and neighbour of the then health secretary, Matt Hancock, despite a lack of experience in the area.

In his letter, Dromey said the scale of the threat posed by Covid last year justified the emergency regulations. He added: “However, as the country has overcome the tragedy of the initial waves of the pandemic, it is less clear whether such regulations should continue to be the basis of procurement guidance to public bodies.

“Following recent revelations regarding the awarding of public contracts during the pandemic and the role of cabinet ministers in this process, I am concerned that such inadequate procurement processes should not be allowed to continue. While coronavirus remains an ongoing threat to the health and wellbeing of the country, the exceptional circumstances of last March are no longer apparent.

“I would therefore be grateful if you could confirm if official guidance continues to allow for emergency procurement procedures, and if so, what justification there is for this guidance and when will it be withdrawn?”

The Cabinet Office, which is in charge of such purchasing regulations, said the actual rules had been in place since 2015, for use in any emergency situation, and that the procurement policy note “simply pointed authorities to longstanding procedures”.

A spokesperson said: “We have also been clear from the outset that public authorities must achieve value for money, use good commercial judgment and follow all due diligence processes when awarding all contracts.”
#Coronavirus  #Covid
Add Comment