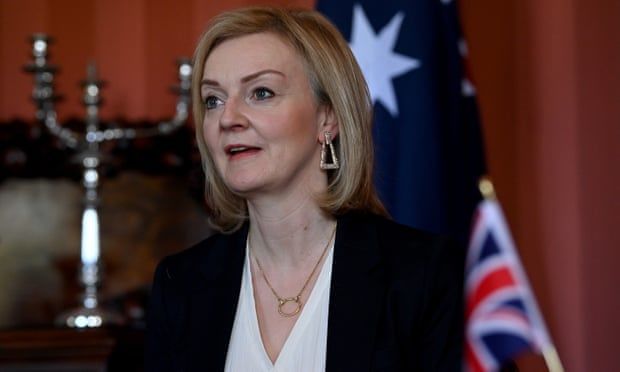 Foreign secretary’s trip on government Airbus A321 estimated to have cost half a million pounds
Liz Truss has been criticised for taking a private jet to Australia for official business rather than using a scheduled flight.

The foreign secretary used the private government Airbus A321 for her flight from London’s Stansted airport to Sydney, via Dubai and Kuala Lumpur, arriving on 20 January.

The foreign secretary held talks with her Australian counterpart and gave a speech on arguing global aggressors are “emboldened in a way we haven’t seen since the cold war”.

The Independent, which first reported the transport arrangement, quoted industry sources who put the cost at half a million pounds. One of the daily Qantas flights to Perth and on to Sydney would have been scheduled to get Truss there almost five hours earlier.

After two days in Sydney, Truss flew to Adelaide for a speech, using the same plane, on 22 January, then flew home, taking the same refuelling stops, the following day. A small ministerial and staff delegation would be expected to be onboard.

The A321 is leased by the Cabinet Office at a cost of £75m for two years, according to aviation expert and former pilot Andy Netherwood. Because the plane uses Boris Johnson’s “Global Britain” livery it spends much of its time on the tarmac because it cannot be used by non-governmental customers.

A Foreign Office spokesperson said: “It’s necessary for the foreign secretary to travel abroad to pursue UK interests around security, trade and technology, as she did during this visit to Australia.

“This trip used government transport and was fully within rules set out in the ministerial code.”

Truss has long been a champion of eliminating government waste. In 2007 she wrote a paper for the Reform thinktank arguing for public servants to fly economy class. “Every public sector worker should feel personal responsibility for the money they spend and the money they save,” she wrote.

“They should spend taxpayers’ money with at least the care they would give to their own. This change of mindset would be reflected in everyday changes such as travelling by economy rather than business class.”

The foreign secretary has also previously been criticised for allegedly overruling the civil service to demand more expensive hospitality. She hosted a lunch with Joe Biden’s trade representative at a private club owned by a Tory donor after overruling civil service advice to look for a cheaper venue, according to leaked emails.

Angela Rayner, the deputy leader of the Labour party, said: “Liz Truss shows the public exactly quite how little respect this Conservative government has for taxpayers’ money with her ridiculous waste of half a million pounds on a private jet trip. This government is brazen in its disregard for upholding decency.

“It is obscene that government ministers are jet-setting yet are hiking taxes and refusing to do anything to help working families when they are feeling the pinch of the cost of living crisis.

“Tories waste disgusting amounts of public money on their own vanity and comfort, Labour wants to see families see a cut to energy bills – that is the difference.”
#Boris Johnson  #Joe Biden  #Johnson
Add Comment