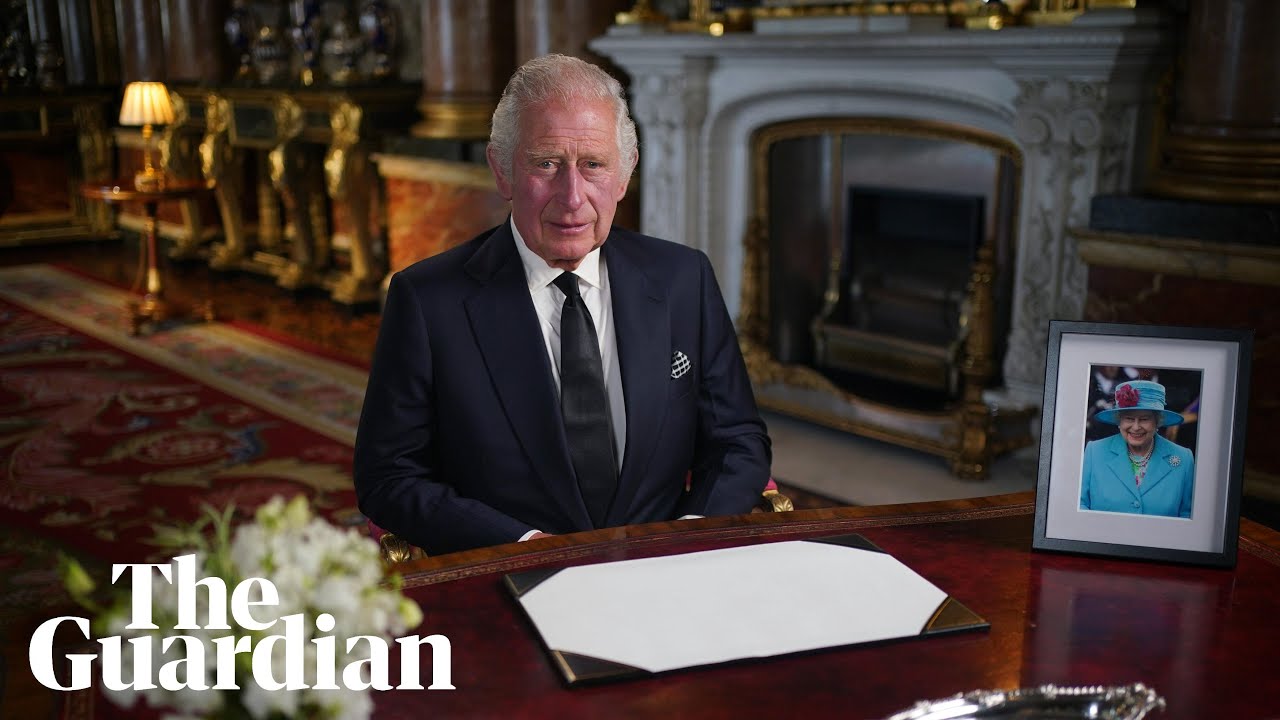 King Charles vows to serve ‘with loyalty, respect and love’ in address to nation

King says Elizabeth II’s was ‘a life well-lived’; names William and Catherine Prince and Princess of Wales; speaks of his love for Harry and Meghan

King Charles III has pledged to serve the country “with loyalty, respect and love” in an emotional address in which he paid tribute to his mother, the Queen, saying: “May ‘flights of angels sing thee to thy rest.’”

Speaking with “feelings of profound sorrow”, he said: “Queen Elizabeth’s was a life well-lived, a promise with destiny kept, and she is mourned most deeply in her passing. That promise of lifelong service I renew to you all today.”

In a speech that reflected his transition from heir to the throne to king, he also acknowledged his role must change.

He spoke of the “roles and duties of monarchy” and the sovereign’s relationship with the Church of England, in which, he said, his own faith was rooted.

“I have been brought up to cherish a sense of duty to others, and to hold in the greatest respect the precious traditions, freedoms and responsibilities of our unique history and our system of parliamentary government,” he said.

“As the Queen herself did with such unswerving devotion, I too now solemnly pledge myself, throughout the remaining time God grants me, to uphold the constitutional principles at the heart of our nation.”

He added: “My life will of course change as I take up my new responsibilities. It will no longer be possible for me to give so much of my time and energies to the charities and issues for which I care so deeply. But I know this important work will go on in the trusted hands of others.”

To William, who now inherits Charles’s title of Duke of Cornwall, he added another. “Today, I am proud to create him Prince of Wales, Tywysog Cymru, the country whose title I have been so greatly privileged to bear during so much of my life and duty.”

Kate now inherits the title of William’s mother, Princess of Wales. A source said the new Princess of Wales “appreciates the history associated with this role but will understandably want to look to the future as she creates her own path”.

Charles said in his address: “With Catherine beside him, our new Prince and Princess of Wales will, I know, continue to inspire and lead our national conversations, helping to bring the marginal to the centre ground where vital help can be given.

“I want also to express my love for Harry and Meghan as they continue to build their lives overseas,” he said in the address, pre-recorded at Buckingham Palace earlier on Friday.

“I pay tribute to my mother’s memory and I honour her life of service. I know that her death brings great sadness to so many of you and I share that sense of loss, beyond measure, with you all.”

He added: “On behalf of all my family, I can only offer the most sincere and heartfelt thanks for your condolences and support. They mean more to me than I can ever possibly express.

“And to my darling Mama, as you begin your last great journey to join my dear late Papa, I want simply to say this: thank you. Thank you for your love and devotion to our family and to the family of nations you have served so diligently all these years.

“May ‘flights of Angels sing thee to thy rest’.”

The final quote is from Hamlet. The King recorded the address in the Blue Drawing Room of Buckingham Palace, where his mother recorded some of her Christmas messages. On his desk was placed a posy of sweet peas mixed with rosemary for remembrance. The vase featured three corgis at the base.

The first glimpse of a grieving Charles as King was as he departed Birkhall, his private home at Balmoral, to travel to London. Dressed in mourning black, he and the new Queen Consort were seen being driven to Aberdeen airport from the Scottish estate where they had rushed to be at his mother’s bedside on Thursday.

At Buckingham Palace, the royal standard was raised for the first time in his reign. Hundreds gathered outside gave three cheers and shouted “God save the King” as he arrived in the state Rolls-Royce and began shaking hands with countless well wishers offering condolences. Joined by Camilla, he viewed floral tributes left outside the Buckingham Palace gates. “I have respect for him. He walked all the way along to see the people and back to see the flowers. It’s what the people wanted to see, which is great,” said Joyce Curtis, 72, visiting from Jersey. “He’s got a job on his hands,” she added.

Though automatically King on the death of his mother, a moment he told one well-wisher outside the palace he had dreaded, he will be formally proclaimed King Charles III at a historic Accession Council on Saturday morning, swearing and signing a declaration and oath in an ancient ceremony being televised for the first time.

He held his first in-person audience with the prime minister, Liz Truss, at Buckingham Palace on Friday afternoon.

It was a day of royal gun salutes. The death gun salute of 96 rounds, one for each year of the Queen’s life, was from Hyde Park, the Tower of London, and other firing stations across the UK. Several thousand people gathered in Hyde Park as 71 horses galloped into position for the 16-minute salute. They watched in a silence so profound “you could hear a pin drop”, said one.

Bells tolled in cities, towns and villages at cathedrals, parish churches and chapels. Condolence books were opened at libraries, churches, and town halls and online on the royal family’s website.

Flowers were piled so high that designated flower areas were created near royal residences for the bouquets, personal notes and candles placed by well-wishers.

“Devotion” and “duty” were the watch words as tributes flooded in from around the world. Among them, a letter from the Dalai Lama to the King, telling him: “Your mother lived a meaningful life with dignity, grace, a strong sense of service and a warm heart, qualities we all should treasure.” The Corgi community had “lost part of our world”, lamented Kay Hogg, secretary of the Welsh Corgi League Scottish sector.

Liz Truss, whose official appointment this week was one of the final public constitutional duties carried out by the Queen, led tributes in a crowded and emotionally charged House of Commons, its benches populated by MPs dressed in black.

She was “the rock on which modern Britain was built”, Truss said. Heralding “our new Carolean age” – a term first used in the reign of Charles I – she said of the King: “Even as he mourns, his sense of duty is clear.” Her predecessor, Boris Johnson, speaking from the backbenches, described the late monarch as “Elizabeth the Great”. On their last meeting, on his resignation, he said, she was as “radiant and knowledgable and as fascinated by politics” as ever, “when she saw off her 14th prime minister and welcomed her 15th”.

As a period of royal mourning for the family was announced to extend seven days after the Queen’s funeral, the Duke of Cornwall and Cambridge, as William is now known, departed early afternoon for Windsor to prepare for the accession council.

An earlier departure from Balmoral was the Duke of Sussex, who had arrived alone after other members of the family on Thursday, and who departed Balmoral for Heathrow at 8.15am. His wife, Meghan, is at Frogmore Cottage, Windsor, with the couple now expected to extend their planned week-long stay in the UK until after his grandmother’s funeral.

As Charles addressed the nation, a congregation of 2,000 members of the public joined the prime minister and senior ministers for a service of remembrance at St Paul’s Cathedral. A hundreds-strong queue had formed several hours before the service, which featured the first official rendition of the national anthem as it reverts for the first time in 70 years to God Save the King.