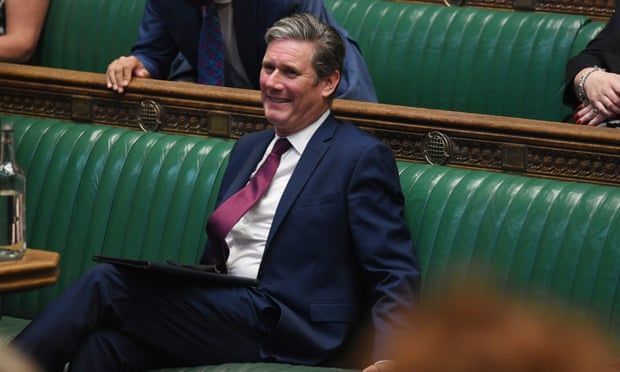 Sam White, who worked under Gordon Brown, will run the Labour leader’s office from September
Keir Starmer has appointed an adviser from the Blair and Brown years as his chief of staff in the final step of a reshuffle of the Labour leader’s top team after the party’s byelection losses.

Sam White, who was a special adviser to Alistair Darling when he was chancellor, will run the leader of the opposition’s office from September. He will replace Morgan McSweeney, who was named Labour elections director.

White, 46, was the longest-serving adviser to Darling while he was chancellor under former prime minister Gordon Brown, and also worked for him when he held cabinet positions under Tony Blair.

In his new role, McSweeney will work with campaign coordinator Shabana Mahmood.

Announcing the new appointments, Starmer said White “brings great experience from both inside and outside government”. And he said Morgan will be responsible for “running a modern, efficient, winning campaign at the next election”.

Starmer started a shakeup of his office after last month’s poor result in the Chesham and Amersham byelection when Labour won just 1.6% of the vote and lost its deposit. It followed the loss of former Labour stronghold Hartlepool to the Conservatives in May.

Despite concerns over how Labour would fare in the Batley and Spen byelection earlier this month, Kim Leadbeater’s narrow victory took some pressure off the Labour leader.

Starmer said on Saturday: “I’m pleased to be able to announce the latest changes to the team as we prepare for the next election.

“Morgan brings great election experience and strategic judgment to the election coordinator role, and he will ensure that we are running a modern, efficient, winning campaign at the next election.

“I’ve worked with Sam before. I know he brings great experience from both inside and outside government to running my office as we take our message out to the country at conference and beyond.”
Add Comment